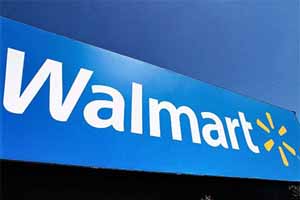 Richard Royal, Walmart’s senior design manager for refrigeration, has set out the global retail giant’s strategy based on increasingly packaged equipment, closer collaboration with the supply chain, and integrated controls systems. Speaking at the International Institute of Refrigeration’s conference on sustainability and the cold chain, Royal told delegates that everything the retailer is doing stems from a desire to improve the efficiency of the business through simplification — “but simple like a smartphone, not like a hammer.”

One of the key ways of reducing carbon emissions, Royal said, was to reduce direct emissions by significantly reducing refrigerant charge. “We can really impact direct emissions positively,” he said. “We believe charge reduction will be one of the single biggest issues for us, together with leak reduction.”

The retailer is pursuing a three pronged direct emissions reduction strategy: reducing charge size; reducing leakage; and transitioning to lower GWP-refrigerants. Walmart has reduced its charge size from 180 kg of R-404A to around 113 kg for new systems, he said, and the retailer is in advanced trials with a refrigerant manufacturer over installation of low-GWP fluids that when implemented would see an average 68 per cent reduction in GWP over the original R-404A estate. Reducing the charge will see increased use of secondary refrigeration systems as well as other new, as-yet undisclosed, technology.

As far as indirect emissions are concerned, Walmart is targeting efficient design; proper commissioning; and effective maintenance. There are a number of projects underway to reduce energy, ranging from installing doors on chiller cabinets on both a new and retrofit basis — with a more radical program than many UK retailers — to more use of LED and solar PV.

Royal challenged the service base too to step up to the challenge of effectively maintaining the equipment. “The service base is not as good as it was 20 years ago. We find them less willing to work as long or as late as they used to.”

But, he said, there are some real opportunities for improving emissions by taking a more radical approach to the technology in use. The current approach of building a bespoke refrigeration system for every store (which thanks to its bespoke nature generally doesn’t have its specific documentation), could be replaced, he contended, with packaged systems that would provide a more standardized, intuitive approach, store by store. The additional advantages could include easily-benchmarked energy ratings, minimal design coordination, and plug-and-play electrical and pipework connections.

“We have packaged equipment for the HVAC. The question is: Can we broaden it out to include the refrigeration, integrating the controls; air cooled condensers and pumps, and pre-charged with refrigerant?”

Another major benefit of the packaged approach would be the ability to reduce leakage, he noted.

“We currently have a leak rate for HVAC of 2 percent but for refrigeration of 12 percent. We can bring that nearer to the 2 percent with a packaged system because of the factory assembly.”

He said that meeting the future challenges would depend on a combination of good personnel and dedicated equipment: “The industry needs people with the vision, strategy, and energy to meet the changing needs. And supermarkets need a low cost, packaged refrigeration system, to provide an integrated alternative to today’s custom-built systems.”