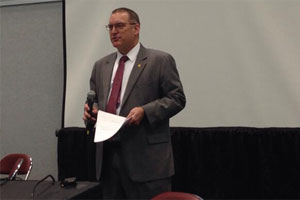 NEW YORK — ASHRAE president Bill Bahnfleth discussed some of the most pressing issues facing the society during the company's annual press breakfast prior to the start of the AHR Expo.

Bahnfleth especially spoke about how important it is for the society to work with members in countries with developing economies. He said they are underserving members there, but the committee will look at needs and what needs to be done. He said the committee will see how ASHRAE can change to meet these needs.

He said Standard 189.1 “has been a good, new development for us,” with a 2014 edition coming later this year. He also noted how the standard has gained “some acceptance” from the U.S. Department of Defense, an important development.

“It’s a very interesting time to be involved in the society,” Bahnfleth said.