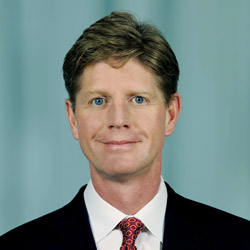 “I have informed the board that I have decided to leave ABB,” Hogan said. “This has been a difficult decision as I leave behind a strong and talented executive committee and a cohesive board whose support I could always count on. I look forward to making a smooth transition with as little disruption as possible to the positive momentum that ABB has established.”

Hogan will continue his duties as CEO until a successor is found.

“Joe is a great and successful CEO and has done a remarkable job of leading the company through the deepest economic crisis in living memory. ABB today is in a much better position than it was when he joined five years ago,” said chairman Hubertus von Grünberg. “I know this has been a tough and difficult decision for Joe and the board sincerely regrets that Joe will be leaving the company.” Hogan joined ABB as CEO in September 2008. During his time at the helm, ABB invested about $20 billion to strengthen the company. Major investments have been made in acquisitions and in research and development. “Under Joe’s leadership, ABB’s competitiveness has significantly improved by investing boldly in measures to drive growth and innovation, and by carefully managing costs,” von Grünberg added.