Showing Signs of an Overlooked Part of Supply Chain 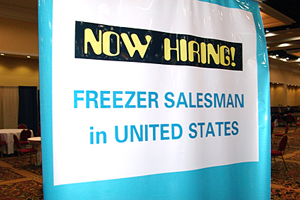 Well, there’s a new one for me. Usually at trade shows, somewhere in a booth might be a small sign saying, “Manufacturer representatives wanted.” The exhibitor in question though, while mainly showing its latest products, also wanted to make it clear that there were some openings for folks willing to bring attention to their line, primarily to wholesalers. In the case of that refrigeration equipment manufacturer, its product line could well include frozen food reach-in or walk-in coolers.

The signage noted above was at the International Institute of Ammonia Refrigeration (IIAR) expo during its annual conference this past March in Colorado Springs, Colo. It was at the booth of a company called Nantong Freezing Equipment Co., out of China.

The situation of the booth sign at IIAR was not that extreme, though the company may not have gotten it all right quite. I’m sure the company was seeking more than one salesperson, so there was a bit of a misstatement in the sign. Use of the simple term “freezer” for what was probably a large line of refrigerated equipment could be an issue. And a large sign related to hiring does not fit the typical way an exhibitor markets itself at a booth, at least in the U.S.

But it was what it was.

After the initial double-take and thoughts as noted above, my mind turned to something more noteworthy, I think. We pay a lot of attention to R&D folks at manufacturers as well as engineers there who design the equipment. We also focus on the wholesalers who carry products, contractors who buy them, and service techs who install the stuff.

But along the supply chain are the sales folks within companies or acting as manufacturers reps who have to learn about the new technologies, and then bring them to the attention of the wholesalers and contractors. They are as valuable to the flow of things as everybody else between the inventor and the end user.