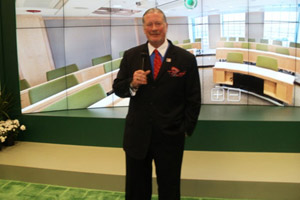 DALLAS — Taco has had a busy year. John Hazen White Jr., president and CEO, made a series of announcements on new developments at the company at its opening press conference.

White said that the acquisition of Hydroflo Pumps has been completed. He noted that he and the leader of Hydroflo are “like brothers from another mother.”

The Taco Innovation and Development Center was completed in 2012. White said the state-of-the-art facility brings benefits to bother the company’s employees and to the industry.