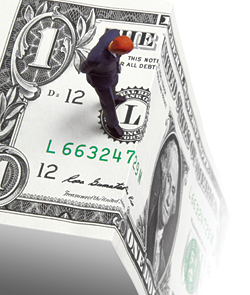 On Jan. 1, 2013, the 112th Congress passed, by a wide margin, the American Taxpayer Relief Act of 2012 ­— a deal meant to avoid the so-called fiscal cliff, which would have triggered severe budget cuts and an immediate increase in income taxes for nearly all Americans.

And while the legislation affects the HVACR industry in a variety of ways, the most significant change may be the retroactive extension of the 25C Residential Energy-Efficiency Tax Credit, which expired Dec. 31, 2011.

Industry leaders, however, are admittedly split on the tax credit’s potential impact, and whether it will actually encourage homeowners to purchase qualifying high-efficiency equipment.

The “fiscal cliff” deal included language that retroactively reinstated the 25C tax credit from Jan. 1, 2012 to Dec. 31, 2013. The credit allows eligible taxpayers to claim up to $500 on their tax returns following the installation of qualified energy-efficient equipment.

The 25C credit was first implemented in 2006 with a $500 limit, capped based on the appliance or retrofit measure, which included a $300 tax credit for water heaters, $150 for furnaces, $150 for boilers, $300 for air conditioners and heat pumps, and $50 for advanced main air-circulating fans.

In early 2009, the tax credit was modified as part of the American Recovery and Reinvestment Act (ARRA). The modification waived limits on individual appliances and allowed homeowners to claim 30 percent of the total cost of the appliance or retrofit measure,
up to $1,500.

In December 2010, appliance and lifetime caps were reinstated, and the credit was reduced to $500.

All aspects of the credit expired on Dec. 31, 2011. However, on Jan. 1, 2013, Congress retroactively reinstated the $500 limit, with appliance and lifetime caps, allowing homeowners who purchased qualifying high-efficiency HVACR or water-heating equipment after Dec. 31, 2011, the opportunity to claim up to $500 of the cost.

Charlie McCrudden, vice president of government relations, Air Conditioning Contractors of America (ACCA), said the idea behind the tax credit is to “justify the added expense of higher-efficiency products,” though he said the HVACR industry is “split on whether the tax credit is effective” when reduced to $500.

“Of that, $5.9 billion were claimed in tax credits. When you factor in all those homeowners who found out they were ineligible, but made the investment anyway, clearly the amount of construction work or retrofit work that the tax credit inspired is greater than $25 billion.”

McCrudden also said the tax credit may be difficult for some homeowners to utilize if they upgraded equipment in 2012, when the tax credit did not exist, since, “The IRS has yet to produce the form a taxpayer would use to calculate the amount they would be able to claim.”

On Jan. 8, the IRS announced in a press release that taxpayers wishing to claim the tax credit will not be able to file their tax returns until late February or early March.

Jon Melchi, director of government affairs for Heating, Air-conditioning & Refrigeration Distributors International (HARDI), said the overall effect of 25C on the HVACR industry, at its reduced level, will be questionable at best, especially in the current economic climate.

The tax credit, when offered at the previous $1,500 amount, “showed an ability to change the product mix toward higher-efficiency products while not necessarily increasing sales,” but at the $500 amount, “it has little chance of doing either,” Melchi said.

“Our members are not entirely convinced that the credit, with its lifetime limitations and product-specific limitations, was nearly as effective as it had been previously, and it will be interesting to see how it impacts sales this year,” Melchi said, adding that since taxes are going up for many Americans, the ability for homeowners to purchase or finance the more expensive, high-efficiency equipment could be affected, even with the $500 credit.

“It’s just something we’re going to have to be prepared for,” Melchi said. “We’re not exactly sure what people’s spending habits will be.”

Despite the reduced amount, and the caps placed on specific appliances, McCrudden said there is still an opportunity for contractors to spread the word about the tax credit’s return and upsell high-efficiency equipment.

“The first thing they need to know is that the tax credit is retroactively applied to 2012. They may have customers who are eligible and should alert homeowners who installed qualified equipment who may be eligible.”

In addition to the tax credit, some states and utility companies offer rebates on high-efficiency equipment that can be used in conjunction with the 25C tax credit. The Database of State Incentives for Renewables and Efficiency (DSIRE) website, www.dsireusa.org, contains searchable information about available rebates in each state and U.S. territory.

Only time will tell how effective retroactively extending the 25C tax credit will be, though industry leaders agree that its success will highly depend on the contractors’ and manufacturers’ ongoing communication with homeowners.

“I think you’re going to see a lot of heads getting together and figuring out how to help consumers make more efficiency-related choices, how to motivate them, and how to pay for it,” Zucconi said.

McCrudden said awareness is a key first step. “There are a lot of people out there who will come to find that, oh, I may be eligible to claim this tax credit. The best advice a contractor can give is to have the homeowner contact their tax adviser about their eligibility.”

SIDEBAR: What Qualifies for the Credit?

The American Taxpayer Relief Act of 2012 extends the tax credits that expired in 2011 for qualified equipment listed in Section 25C of the Internal Revenue Code that was installed any time after Dec. 31, 2011. According to AHRI, qualified equipment includes:

• Electric heat pump water heaters with energy factors of at least 2.0; and

• Natural gas, propane, or oil water heaters with energy factors of at least 0.82 or thermal efficiencies of at least 90 percent.

• Natural gas, propane, or oil furnaces with AFUE ratings of not less than 95 percent.

• Natural gas, propane, or oil boilers with AFUE ratings of not less than 95 percent.

• A fan used in a natural gas, propane, or oil furnaces with annual electricity use of no more than 2 percent of the furnace’s total energy use.