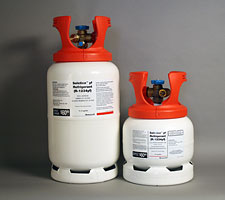 Honeywell has announced that it has begun shipping additional quantities of HFO-1234yf, which it markets as Solstice™ yf. The refrigerant is targeted for the automotive market, although other HFO configurations are being developed for stationary applications.

“Our additional supply allows us to ship increased volumes of Honeywell’s low-global-warming-potential Solstice yf and will enable automobile manufacturers around the world to significantly reduce the environmental impact of the automotive fleet, beginning now,” said Terrence Hahn, vice president and general manager of Honeywell’s Fluorine Products business. “Solstice yf not only exceeds the goals of the EU’s [European Union] Mobile Air Conditioning (MAC) Directive, it provides a safe, long-term, global, and energy-efficient solution that will become an even larger component of climate protection for years to come.”

The refrigerant is approved for use in Europe, Japan, Korea, China, and the United States. It is registered under the EU chemical regulation REACH (Registration, Evaluation, Authorization and Restriction of Chemical substances), and is included in the U.S. Environmental Protection Agency’s (EPA) SNAP (Significant New Alternatives Policy) Program. Both the EPA and U.S. Department of Transportation have adopted standards for reducing greenhouse gas emissions from light-duty motor vehicles. Vehicle manufacturers can receive credit toward the standards by using refrigerants with less climate impact, such as HFO-1234yf, Honeywell said.

The company described the refrigerant as “a near drop-in replacement for HFC-134a in use today, with performance properties similar to those of HFC-134a. Existing automotive air conditioning systems will require only minor changes to operate with Solstice yf, allowing easy and economical implementation for carmakers.”

According to industry estimates, nearly 100 million cars with air conditioning systems are produced each year globally, with each system using between 1/2 and 1 kilogram of refrigerant. Honeywell said, “Solstice yf has undergone extensive testing for safety and efficacy by independent testing groups such as the Society of Automotive Engineers (SAE) International Cooperative Research Program, in which leading automakers participate. The SAE concluded that the product is ‘safe for use in automobiles.’”