This website requires certain cookies to work and uses other cookies to help you have the best experience. By visiting this website, certain cookies have already been set, which you may delete and block. By closing this message or continuing to use our site, you agree to the use of cookies. Visit our updated privacy and cookie policy to learn more.
Home » Problems with People at Work Could be Generational
HVAC Residential MarketHVAC Light Commercial MarketHVAC Commercial Market

Problems with People at Work Could be Generational 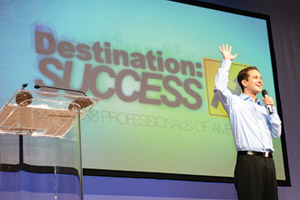 If your company is experiencing personnel issues, productivity challenges, dysfunctional work teams or all of the above, it could be caused by the generational clash between two age groups that make up the largest segments of the workforce, according to Jason Ryan Dorsey, chief strategy officer for The Center for Generational Kinetics. Dorsey, also known as “The Gen Y Guy”, gave the keynote address at the most recent Air-Conditioning, Heating & Refrigeration Institute (AHRI) annual convention and shared several examples of how Baby Boomers (age 48 to 65) clash with Gen Y or Millenials (age 18-34). His latest book,Y-Sizing Your Business,also provides some insights and practical guidelines for working with and motivating the younger generation.

Three members of The NEWS contractor panel also provided some experiences and practical answers to dealing with cross-generational issues. The panel members included Tim Paetz, general manager of Bud Anderson Heating and Cooling, Lowell, Ark.; Hank Bloom, president of Environmental Conditioning Systems, Mentor, Ohio; and Jim Hussey, Marina Mechanical, San Leandro, Calif. Hussey commented on the differences between the generations, “When I first went into business in 1980, I had a service technician who was fast approaching retirement and his goal was to complete his career with his slide rule. I find it interesting that as I approach my retirement, I am hoping to finish my career without a Facebook account and without sending or receiving a Tweet.”

Each of the generations was uniquely influenced by events and societal norms which results in different work habits, expectations, and motivations. Baby Boomers (ages 48 to 65) make up a large segment of the executives and owners of companies and view the work place totally different from their Gen Y counterparts. The Boomer generation is sandwiched between the aftermath of World War II and the emergence of Vietnam. Dorsey stated, “Boomers were expected to start at the bottom of the organizational chart and work their way up without skipping a level. They knew there were no shortcuts to success except hard work. They would have to rely on their own efforts and initiatives if they were going to get what they wanted from work and life.” They have a strong work ethic that is measured in hours worked per week. Dorsey’s book tabs them as, “The workaholics of the modern workplace.”

Dorsey painted a totally different picture of Gen Y in his book. The defining moments for this generation were the Challenger disaster and 9/11. When Gen Y members entered the workforce at 22 to 24, it is very likely that it was their first real job. They bring a lot of theoretical knowledge and course learning experience but very little on-the-job training. In Y-Size Your Business, Dorsey states, “We are dependent on technology for staying connected to everything and everyone all the time, and we are outcome-driven.” They put lifestyle way ahead of work and have a strong sense of entitlement.

Put these generations together in a contracting firm or distribution business and problems can arise if each generation expects that the other generations should think and act alike. Bloom stated, “Boomers tend to think that the Millenials are lazy and have no drive or loyalty and in some cases they also feel that they have no communication skills because they hide behind emails and texting.” From Hussey’s point of view, “Young people entering the workforce are most focused on what is ‘fair.’ Each seem to have their own opinion of what is fair and are self-appointed arbiters of fair for both themselves and everyone else around them. This tends to burn time and definitely interferes with productivity.”

The older generation has worked long hours all their lives with many Boomers getting their first W-2s before they were sixteen. They are confronted with Millenials that come to work at 24 with no job experience and expect to be put into a responsible position. They have gone to college for six to eight years and feel entitled according to Dorsey.

Boomers focus on hours worked during the day and week whereas Millenials focus on the task at hand and the outcome rather than the behavior. Paetz, who confessed to being a Baby Boomer, has recently made some adjustments at Bud Anderson Heating and Cooling. “We are starting to find out that we need to let service technicians work to their schedule as long as it is feasible,” he said. Bloom felt managers should manage their process. “If you have a good process in place the rest takes care of itself. Young people do not want to be managed. Period,” he said.

Boomers are “nose to the grindstone” and Millenials are multitaskers. The older generation does business by face-to-face meetings, whereas the younger generation prefers to communicate digitally. According to Preston Swincher, a Millennial and Content Facilitator for The Center for Generational Kinetics, “An office meeting is a failed email. Motivation also offers a stark contrast. Baby Boomers are motivated by money, special rewards, and awards that can be displayed in the office. A Gen Y employee motivation comes from instant gratification, a sense of mission, and time off from work to pursue personal interests.” Swincher also said, “Time is a motivator, so don’t give us [Gen Y employees] a gift; instead give us time off.”

Dorsey’s book lists several strategies and tactics for best employing the different generations that were collected from interviews with several successful companies and were then refined based on his company’s research in Gen Y preferences. Here are some practical ideas:

1. Make the first day on the job fun and unforgettable and never start a new Gen Y hire on Monday. Millenials need to feel important from day one. They need to know about the company, its mission, and they need to know that it is the right fit. Dorsey suggests the employer pick a day of the week that is less busy or hectic so that time can be devoted to showing the new employee around and establishing goals for the first 90 days. He further recommends that the new hire be guided by a fellow Millennial. Make them feel like they are part of the team by giving them business cards on the first day!

2. Share your mission and set goals. Gen Y are much more interested in the mission of the company and want to see themselves as part of a business or organization that is having an impact. Also, have the employee write first-year goals and steps that will be taken to achieve those goals.

3. Reposition tasks as challenges. Young employees will accept repetitive and somewhat menial tasks if they are repositioned into “bite-size performance challenges with near-term results.” Help them look past the monotony and think instead about the desired outcome. Paetz mentioned how one of his Gen Y managers oversees the call center. “She goes at it a whole different way much like a game show. She makes the daily tasks fun, and it works because it focuses on today’s goal.”

4. Performance reviews are critical. These outcome-driven interactions are what keep Gen Y focused and on task.

5. Start training on a more basic level and then ramp up quickly. “We haven’t been working. We’ve been studying about work,” observed Dempsey. Also, to match the goal orientation of this generation, it should be designed to start with the end in mind and work backwards. Video training in short spurts helps with this YouTube generation. Bloom said, “Young people are stuck behind computers and computer games. They want to be successful, but they don’t have leadership skills or personal skills interacting face to face.”

Personnel challenges can make or break a company in today’s tight economy. Dorsey strongly believes, “If companies can successfully navigate the dynamics of a multigenerational workforce, in particular Gen Y’s tidal wave-like entry, they can unlock tremendous workplace potential where other companies only unlock infighting.”

For more information about generational issues, go to www.genhq.com.

John Conrad is Senior Editor. Email him at  johnconrad@achrnews.com.
You must login or register in order to post a comment.