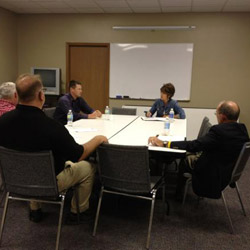 Dick and Glenys Hull of Johnstone Supply in Sioux Falls, S.D., hosted Congresswoman Kristi Noem in a small business roundtable recently to discuss looming tax increases if the current tax rates are allowed to expire at the end of the year. In July, the Senate passed an extension of the current rates for middle and low income Americans, but not for higher earners, a position supported by President Obama. The tax increase would fall on individuals who make $200,000 or more and couples who make $250,000 or more. The Hulls established a relationship with Rep. Noem at the last HARDI Congressional Fly-in.

“This proposal shows me just how little our President and many of our leaders understand about small business in America,” said Rick Hull. “My wife and I are owners of a small business. We live and breathe it every day. Our company is classified as an S Corporation, and we will be adversely affected by the President’s proposal. Last year, we bought new equipment and hired three new employees. This year, we’re hoping to invest even more in new trucks and new workers. We’re even discussing plans to expand. But increased taxes will mean our company will make fewer purchases, experience less growth, and provide fewer jobs.”

A tax increase on pass-through organizations could result in lower wages, scaled back benefits or reduced employment. A “pass-through” organization is organized as an S corporation, partnership or sole proprietorship and file taxes at the individual rate. There’s a push to extend the current tax rates that President Bush signed in 2001 and 2003 and President Obama extended in 2010.

“The president talks about raising taxes on millionaires and billionaires, but his plan would actually raise taxes on small businesses in South Dakota and across our country,” said Rep. Noem. “Ninety-five percent of South Dakota employers pay taxes at the individual rate, meaning this tax increase could impact them in a big way. These are businesses that pay the wages that allow hundreds of thousands of South Dakotans to put food on the table, pay mortgages and save for the future. South Dakotans already send enough of their hard-earned paychecks to Washington, that’s why I’ll be voting next week to extend tax relief for all Americans.”