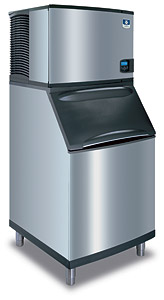 Now that the Environmental Protection Agency (EPA) has approved the use of three hydrocarbon (HC) refrigerants in some smaller appliance applications, advocates of HCs are continuing to promote use in larger equipment, with commercial ice machines as well as reach-in/walk-in freezers and coolers possibly next in line. Those who make such commercial equipment say that should the EPA approve use in larger systems and if proper components are available, they would be willing to take a hard look at such technology.

The EPA approved the use of R-290 (propane), R-600a (isobutene), and an HC-blend known as R-441A for charge sizes up to 57 grams for household appliances and 150 grams for commercial units. The move was considered significant in opening the doors for so-called natural refrigerants where chemically produced f-gas refrigerants had long held domain.

The use of HCs got the support of such end-user powerhouses as Ben and Jerry’s and General Electric. And that, combined with Coca-Cola increasing its advocacy of another natural refrigerant, R-744 (CO2), and developments in which ammonia is used in commercial sites such as supermarkets, created the recent shift of interest in naturals.

The focus was further enhanced by Keilly Witman of the EPA’s Greenchill program at the recent Food Marketing Institute Expo in Chicago. Speaking at several seminars, she said HCs, R-744, and ammonia would dominate refrigerant-related talk for the foreseeable future.

“Interest is increasingly high,” Witman said, in noting at least one supermarket in the United States is using ammonia as a refrigerant and one is using CO2 in a transcritical application coming on-line. Meanwhile, she said the newly formed Climate and Clean Air Coalition is focusing on proper training “for those who want to get out of [the use of] HFCs.”

This is leading to growing interest from the ice machine/reach-in/walk-in sector, even though all still continue to use HFCs, with R-404a among the most common.

According to Kenny Owen of Master-Bilt, HCs are viable. “For refrigerator temperatures, I think the efficiency is acceptable,” he said. However, he cautioned, “Walk-in systems are large so they would require a refrigerant charge that is much larger than the 150-gram limit [for commercial] equipment [currently approved by the EPA].”

Owen also noted that HCs are “being used in Europe for domestic and commercial equipment.”

Robert Weber, vice president of engineering at Ice-O-Matic, also looked overseas for guidance on how things might play out in the United States. “Provided that efficiency and safety requirements are solved, there would most likely be some adaptation, particularly in Europe due to growing environmental concerns.”

According to Larry Scallion of Manitowoc’s walk-in division, “I believe that if the regulations only allowing a small amount [about 1/3 pound] to be used in a single application are changed, it is very likely that some type of hydrocarbon will be used in the not-very-distant future. I do believe that some type of HC will be the next big shift in refrigerants; however, regulations restricting quantity must change first.”

Comments from Traulsen, another manufacturer of refrigeration products, noted, “More recently there is interest in R-290 and CO2. But it’s still too early to have a high degree of certainty about future growth. We do believe that HC refrigerants, namely R-290, do have a place in the commercial refrigeration sector. However, the charge limitations in the EPA’s SNAP [Significant New Alternatives Policy] ruling will minimize the product application and likely slow adoption in the marketplace.”

Over on the ice machine side, Daryl Erbs of Manitowoc Ice said propane has been used in some of his company’s equipment in Europe since April 2012.

When it comes to greater use of HCs, Erbs cautioned that “building codes in the U.S. prohibit use of HCs in commercial buildings,” meaning changes in such codes would have to be made.

But the potential is there, said Erbs. “For small systems with factory-sealed refrigeration systems, there is potential for growth of HC use in ice machines. HC refrigerants provide better energy efficiency than current HFC options, and have near zero direct GWP.”

Traulsen’s comments also support additional training. “Training required in order to work with HC refrigerants would fall in line with additional safety training for proper service, handling, storage, and ventilation of flammable and combustible liquids/refrigerants. A technician’s service and personal protective equipment may also need to be upgraded to account for HC refrigerants; for example, only spark-proof tools should be used.”

This could all end up being challenging, said Weber. “Due to increased safety requirements associated with HC refrigerant use, significant retraining of technicians will be needed.”

Meanwhile, the use of CO2 has also entered into the natural mix, especially since Coca-Cola recently announced that 82 percent of all new cooler purchases made by Coca-Cola Enterprises are now HFC-free. In its latest corporate social responsibility report, the company said that starting in January 2013, Coca-Cola Enterprises, a spinoff of the Coca-Cola Co., plans to purchase only HFC-free coolers. The Coca-Cola Co. itself said it will begin phasing out the use of HFCs in new equipment and complete that process by 2015. In addition, it said it will only install HFC-free coolers at the 2012 London Olympics. The alternative refrigerant was reported to be R-744.

Ice machine, walk-in, and reach-in manufacturers also continue to watch developments with the HFO f-gases, which are being developed for use in automotive air conditioning with attention also being paid to stationary equipment.

According to Manitowoc’s Erbs, “Ice machines are included in the scope of the LGWP AREP [Low Global Warming Potential Alternative Refrigerants Evaluation Program] sponsored by AHRI [Air-Conditioning, Heating, and Refrigeration Institute], which is evaluating a wide range of refrigerant options including those based on HFO chemistry.”