The show was organized by the Indian Society of Heating, Refrigerating, and Air Conditioning Engineers (ISHRAE) and the theme of the show was “For a Greener 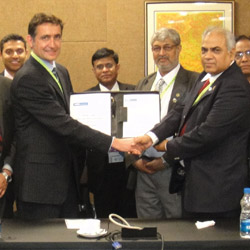 Tomorrow.” Many AHRI members and certification program participants exhibited their products, highlighting the significance of the booming Indian market. AHRI representatives met with officials from several local manufacturers who participate in AHRI certification programs, particularly in the air-cooling and air-heating coils programs.

AHRI and ISHRAE also formed a global partnership agreement. The goal of the agreement is to further promote the art and science of the HVACR and water heating industry, as well as its contribution to energy efficiency and sound policies for a greener environment.AHRI also met with the director of the Indian Bureau of Energy Efficiency (BEE) to discuss that organization’s effort to establish Minimum Energy Performance Standards (MEPS). Staff also met with ISHRAE and the Indian manufacturer’s association, Refrigeration & Airconditioning Manufacturers’ Association (RAMA), on their efforts to develop Indian HVAC equipment standards based on a tripartite agreement with AHRI.