By Herb Woerpel
A new bill, known as the Cut Energy Bills at Home Act, has been proposed in the Senate. Senate Bill 1914 would establish a $2,000 base credit for homeowners who reduce energy use by 20 percent through the installation of energy-efficient equipment. 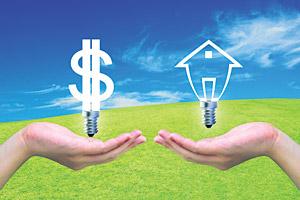 A $500 stipend would be awarded for each 5 percent reduction of energy use thereafter, with a maximum incentive limited to the lesser of $5,000 or 30 percent of the qualified home energy-efficiency expenditure.

Energy-efficiency experts believe the Cut Energy Bills at Home Act could create a sudden economic impact across the HVAC industry.

“Estimates show that 25E will generate about 19,000 jobs, or about 100,000 job years,” said Steve Nadel, ACEEE executive director. “It creates direct jobs through contracting, and indirect jobs in supply and manufacturing. The savings accumulated allows homeowners to spend money on other items, rather than energy.”

The bill was introduced by Sen. Olympia Snowe, R-Maine, in November 2011. It was read twice and has since been forwarded to the Senate finance committee.

The Potential Impact of 25E

The bill is being touted as the first residential performance-based tax credit for homeowners who wish to make whole-house, energy-efficiency improvements.

The Alliance to Save Energy, the American Council for an Energy Efficiency Economy (ACEEE), Efficiency First, the Natural Resources Defense Council (NRDC), RESNET, and several other organizations are publicly supporting the bill.

“Clearly we’re talking about a game-changing incentive for our industry,” said Matt Golden, Efficiency First policy chair. “This approach is extremely straightforward and very market based. The fact that it will be rolled out uniformly across the entire country will have large implications for home performance.”

Nadel believes the measure could provide significant energy savings. “If we imagine that 1 million homes will participate between 2012 and 2016, with an average of 25 percent savings, that equates to about 1,700 kilowatt-hours per home, or about 180 therms each year,” he said. “Given these assumptions, savings by 2016 could be 1.7 billion kilowatt-hours and about 18 trillion Btu of fuel. This is enough energy to power about 375,000 homes, which is a pretty significant impact.”

“Energy efficiency is the cheapest, cleanest, and quickest resource we have to reduce the environmental impacts of energy use,” she said. “Whole-home incentives target deep energy savings at the lowest cost, while incentivizing investment in most cost-effective measures first. We think 25E is structured in such a way that it will greatly scale up the home performance market and encourage home efficiency retrofit, reducing these negative environmental impacts on energy use.”

The bill, if approved, would add a new section, Section 25E: Performance Based Energy Improvements, to the Internal Revenue Code.

Individuals who qualify for the 25E incentive would be rewarded for work done in the taxable year and would apply for the credit when they submit their annual tax return. Upon the bill’s passage, the IRS would provide specific guidelines for what must be retained as proof of the retrofit, though the legislation already states photographic evidence, as well as signed contractor documents, must be included.

A homeowner could only apply for work completed on his or her primary residence. Energy reduction accumulated through the use of renewable energy systems or appliances would be ineligible.

To measure efficiency, a contractor would establish baseline energy use of the home using Building Performance Institute (BPI)-2400-S-2011 or an equivalent standard. Participants would then provide estimated energy savings by modeling the retrofit using software certified by the Residential Energy Services Network (RESNET), or other software approved by the Secretary of Energy. The percentage of energy savings would be computed through software estimates based upon the work performed.

“While we don’t have a problem with the organizations listed, we don’t support those organizations being exclusively named,” said David Calabrese, AHRI senior vice president of public policy. “In a whole building approach, the bill should be left open to all qualified groups to certify.”

ACCA withheld endorsement of the Home Star Retrofit Rebate Program (H.R. 5019) in 2010 in part because of the limited number of contractors eligible to perform the work. ACCA leaders were pleased to see RESNET added to the bill’s language as a recognized provider, in addition to BPI.

“We’re encouraged that this bill has been expanded to include the RESNET Energy Smart Home Performance Teams,” said Charlie McCrudden, ACCA vice president of government relations. “The addition of RESNET allows a much more inclusive opportunity for contractors to be involved.”

Much like ACCA, HARDI also opposed Home Star legislation, and multiple other measures, because of accreditation exclusivity.

“We opposed Home Star because it specifically named a singular accreditation standard, which HARDI felt was restrictive and not representative of the industry. In fact, multiple states did not have a single contractor with the proposed accreditation,” said Jonathan Melchi, HARDI director of government affairs. “We’re very glad to see RESNET added, which opens this up a bit more.”

“RESNET and BPI have separate quality standards, and we are working to make sure those are in sync as closely as possible,” he said. “This will require a lot of work by both groups, but both are determined to have equivalent inspection standards regarding this measure.”

Several supporters believe 25E is a positive measure that will gain Congress’s bipartisan support sooner than later. “In political terms, 25E does fit in well with other efficiency policies,” said Lowell Ungar, Alliance to Save Energy director of policy. “Like almost all energy efficiency policies, it has multiple benefits in helping the environment, consumers, and improving energy security. Those are the kinds of benefits that attract broad support across the nation and throughout Congress.”

“We are targeting middle-class American homeowners and offering them a tax cut to help them help the economy by creating jobs,” she said. “The energy savings is directly related to the tax credit, which will help sell this. I think this bill has just the right message for the current Congress.”

“We were unable to extend the existing 25C tax credit in 2011, and the idea of creating a new tax credit will be a very tough sell,” said McCrudden. “There is no identification of where the money is coming from to support this and keeping a bill revenue neutral is paramount to this Congress. Ultimately it is Congress’s job to identify a program that will lose funding when new revenue is needed to fund a new measure.”

“The 25C credits were geared more toward individual products, providing specific dollar amounts for the purchase of specific units, which we felt was much more effective,” he said. “Anything that moves the ball forward is good, but we prefer 25C because it was a much more direct and effective tool.”

Melchi said 25E’s journey to approval will include a very steep uphill climb. “The House has been very hesitant to push legislation such as 25E,” he said. “I think there are some positives in the bill, but it may be a heavy lift for Congress to make.”