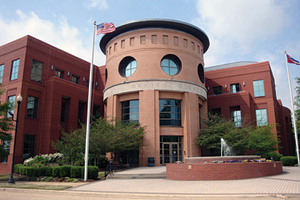 DeSoto County is earmarked as one of the fastest growing counties in the state and one of the top 40 fastest growing counties in the country. County officials turned to Siemens to help it fast-track upgrades to the county government’s buildings. Siemens teamed up with officials to secure $1 million in American Recovery & Reinvestment Act (ARRA) grant funding, which the county leveraged to self-finance the overall project. Siemens, serving as the design-build general contractor, is managing the overall project and employing a local engineering firm and several local contractors and suppliers.

Among the array of energy and operational saving improvements implemented will be a chilled water plant to supply chilled water to the jail, courthouse, and administration buildings. The existing individual DX cooling units will be upgraded with high-efficiency chilled water coils. To reduce the total cost of operations for the cooling system, Siemens’ Demand Flow™ chilled water system technology was specified as part of the design.

Siemens energy audits, which create the baseline energy savings guaranteed in the performance contract, stipulate that over the contract’s 15-year duration DeSoto County will avoid the consumption of 37 million kWh of electricity, 516,840 ccf of natural gas, 66.4 million gallons of water, and a reduction in CO2 emissions by some 53 million pounds. Financially, it was reported that the project’s energy and resource savings will yield the annual equivalent of $323,927 in avoided utility and operational costs.

The project’s scope includes retrofitting more than 6,000 T-12 Osram light fixtures in each of the county’s 27 buildings. Twenty facilities will be fitted with new low-flow plumbing fixtures, and among the county’s 27 buildings, 19 will have Apogee® energy management systems installed. During the later phases of the facility improvement work, the courthouse will also have its existing DX split systems replaced with a high-efficiency variable-air-volume system with hot water heat.

Although system and building envelope improvements continue, early evaluation and consultative work by Siemens has helped the county earn a Green Globes® Certification for the county’s administration building — the first existing building in the state of Mississippi to be either Leadership in Energy and Environmental Design (LEED) or Green Globes Certified.