Shuffling Roles In Search of Your Foles

For football fans — especially those in the Greater Philadelphia area — the name Nick Foles gained immediate relevance on Sunday. 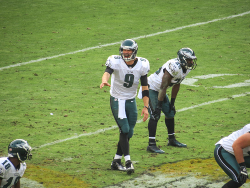 Foles, a third-round 2012 draft pick out of the University of Arizona, tossed seven touchdowns, tying the single-game NFL record, leading the Philadelphia Eagles to a 49-20 win over the Oakland Raiders.

Foles’ passing rating — an analytical calculation of a quarterback’s efficiency — registered at 158.3, the highest ever recorded in the NFL’s storied 97-year career. Foles' seven-touchdown performance has only been done five times. Peyton Manning, the Denver Broncos' first-ballot hall-of-fame signal caller, achieved the monumentus feat in his team's heralded Week 1 win over the Baltimore Ravens.

Within your ranks, perhaps you have an all-star patiently waiting his turn. I mean, sure, your service manager has done a "servicable" job for the last two decades, but, what would happen if you gave your reigning Nick Foles a chance? What if you handed your overachieving iPad-carrying rookie the keys to the front door? Could he deliver a similar performance? Would he exceed expectations? Perhaps all he needs is an opportunity. A chance. Are you willing to go to your bench?

It’s at least worth consideration, right? Perhaps the risk is worth the reward? Or, on the other hand, maybe you're of the mindset that Sunday's performance shines of "Foles" gold. Maybe, in your situation it's best not to take the risk, to remain conservative, and continue trudging along as an average company, with an average profit margain, that always seems to be at least one step behind the competition. The choice is yours, and, no matter which way you turn, remember, it's not in how we play the game, but if we win or lose.

Or, are you of the mindset that last Sunday's performance was simply a case of “Foles” gold.
KEYWORDS: appointments and announcements Marketing and HVACR

Positive Reviews are worth their weight in SOLD

I'm glad you liked the tips in "Celebrate...