An HVAC crew performing a routine installation on May 27 suddenly found themselves helping a child get out of a burning building.

Nick Lott, install and parts manager for Reliable Heating and Air in Kennesaw, Georgia, was dropping off an air conditioning unit to a home in nearby Newnan when he started to smell smoke. That’s not unusual this time of year in the state, which is fairly permissive about burning leaves. Reliable company policy is to always park in the street. Journeyman installer Jared Dorsey and install helper Rafael Goggins joined him at the truck to unload the unit. 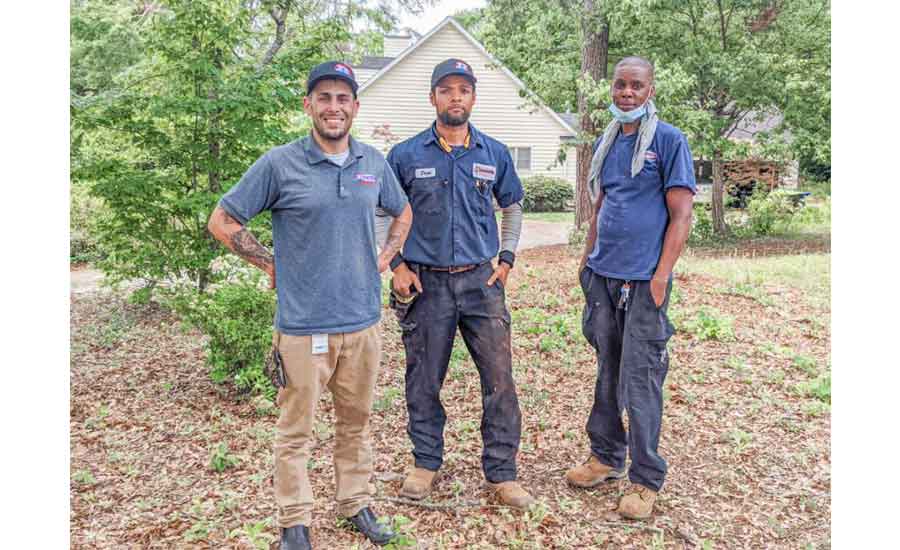 KEEPING COOL: From left, Nick Lott, Jared Dorsey, and Rafael Goggins of Reliable Heating and Air take a break after helping a young boy get out of a burning house.

They soon saw the smoke was coming from the house next door. From their angle, they were still unsure what was happening. Closer inspection showed a foot-wide plume of smoke coming out of the attic. Lott told the installers to start pounding on the door while he called 911. A 12-year-old boy answered the door. He had been sleeping and woke up only when he heard the crew at the door. They told the boy he needed to get out of the house because it was on fire.

The boy said he needed to find his cats first and shut the door. A few minutes passed, and Lott asked where he went. When told, he went in the house and found the boy wandering around, looking for the cats. Lott said the cats would be fine, and he needed to get out of the house.

One cat did run out on its own to the end of the driveway. The kitten ran out and then ran back into the house. Dorsey went in after it and brought it out.

“We all are the kind of people that will stop and do things to help out.”
Nick Lott
install and parts manager
Reliable Heating and Air

The boy didn’t know his mother’s phone number. It was stored on his iPad, which was inside the burning house. He told Lott she worked at the federal courthouse, so he called there. The court clerk didn’t know the boy’s mother. Lott told her she needed to find her because her house was on fire.

The fire department arrived after about 15 minutes. By then, the whole attic was engulfed in flames. The crew returned to the customer’s house and finished the installation.

“I don’t know if it was just my day, but I passed a car fire on the way back,” Lott said.

The house fire appears to have been caused by a burnt-out attic fan. The Newnan Fire Department reported minimal damage, but told a newspaper it could have been worse if it had gone unnoticed. A few years ago, an attic fire started in the middle of the night at another house in Newnan and a 91-year-old woman died.

Lott suspects wiring may have played a part. The house where the Reliable crew was doing the install had faulty wiring that the company’s electricians repaired that day. Lott said it’s possible several homes in the neighborhood, all built by the same developer, have similar problems.

Reliable has been serving customers in the area for more than 40 years. While this was an extreme case, Reliable staff often help drivers with flat tires or people in an electric wheelchair that stalls out.

“We all are the kind of people that will stop and do things to help out,” Lott said. “But that was my first house fire.”