Here at Fire & Ice Heating and Air Conditioning, we just started accepting Bitcoin for any and all services. You can now pay for a full system, ductwork replacement, IAQ products, maintenance and repairs … all with Bitcoin.

This is something of a novelty in HVAC, and the thought of it probably raises some eyebrows. Isn’t Bitcoin volatile? How can it be a viable way to conduct business? And how would I go about setting up a Bitcoin payment system, anyway? These are some of the questions we had to consider and that are probably swimming through your head as well.

I’m here to demystify the subject, though, and make the case that more contractors should consider accepting it as a form of payment.

Bitcoin is a cryptocurrency, which means it’s entirely digital. It’s been in existence since 2009, and unless you’ve been living under a rock, you’ll have heard of it in recent years. The currency is stored either in digital “wallets” in the form of apps and websites, or on physical hard drives. It’s traded on a public ledger known as the blockchain, which records transactions and can be downloaded by anyone; this provides security in the form of redundant confirmation of a transaction. 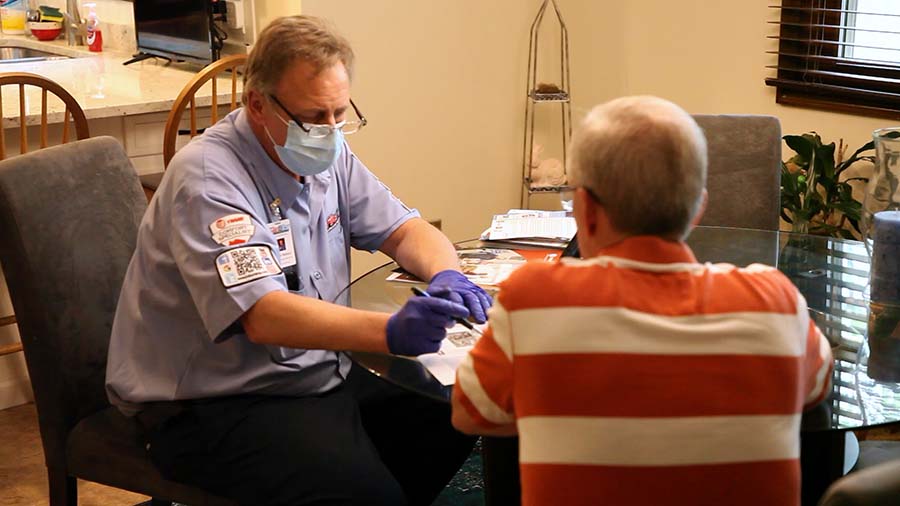 It can be traded publicly, and many businesses and individual vendors are beginning to accept it as a form of payment. Services like CoinMap now exist that will show you local businesses that will accept Bitcoin. The number grows weekly in any major metro area, and major companies like Etsy, Overstock, and Expedia are already able to accept payments in Bitcoin.

News articles about Bitcoin are usually sensationalistic. “Investors make billions on Bitcoin boom!” they’ll say. Ignore these. They’re clickbait and are largely removed from the systematic progress the currency has made. The appeal for businesses shouldn’t be to get rich quick, but rather to expand the types of customers a company can market to.

Why Accept Bitcoin as Payment?

The short answer here is that it will open your business to people who might otherwise struggle to pay for a new HVAC system. There’s a new generation of investors with cryptocurrency portfolios that rival or surpass their traditional savings and investments. Why limit yourself to your existing customer base?

The longer answer involves a number of less obvious benefits. For one, it can be good PR for a company, one that signals to local homeowners that your company is pushing the envelope and searching for new ways to provide valuable services.

The logistics of setting up and accepting payments are also not too hard to figure out. A competent accountant or dedicated individual contractor can establish a system of pay rather quickly.

Here at Fire & Ice, we use the BitPay app to manage transfers. This app quickly and easily facilitates the transfer of Bitcoin. There are a few more steps involved in paying with Bitcoin that’s stored on a physical drive, but we confirm the amount and transfer it into our BitPay account, from which we can access it and move it around.

BitPay isn’t the only option available to companies, though it’s a popular one. But the good news is that anyone who is prepared to pay in Bitcoin is already going to know as much or more about it than you will. Therefore, the education required to bring Bitcoin customers up to speed and facilitate a transaction is minimal or nonexistent.

Importantly, you don’t have to keep Bitcoin payments as Bitcoin. It’s possible to convert it to cash or deposit it into a traditional account almost instantly. Because of this, though, we don’t offer refunds in Bitcoin. If a customer pays in Bitcoin and later is eligible for a refund, the refund is through another method of payment.

What Are the Risks?

Nothing is fully removed from risk. While the blockchain has proven to be remarkably secure for logging transactions, websites have been hacked and hard drives have been destroyed or stolen. Traditional banking institutions have been hacked as well, so this isn’t unique to cryptocurrencies, but it’s always a consideration.

Bitcoin is also still volatile enough that it’s possible, though unlikely, that the price will change significantly between payment and cashing out. The currency’s long-term trend has been upward, but that won’t always be true in the short term. If you’re immediately cashing out, I wouldn’t consider this a large risk. But if you choose to keep a balance of Bitcoin long-term, you’ll be subject to the whims of its pricing movement and subject to additional risk.

The only other risk is in having a staff that isn’t knowledgeable enough to speak to customers about Bitcoin payments. Training for sales and service staff should be built into any plan to adopt Bitcoin.

I’d be lying if I say Bitcoin payments represent a large portion of our sales. They don’t — at least, not yet. So it’s tempting to think of this transition as merely a gimmick.

But when considering whether or not we’d do this, the question we asked wasn’t “Where is our customer base right now?” but rather, “Where is it headed?” Cryptocurrencies aren’t going away, and to ignore them is to ignore a growing market segment that can and will help the businesses who responsibly adopt it in the coming months and years.

HVAC Labor Management: Communication is Everything

HVAC Labor Management: Planning and the Value of Time

Automate to Dominate: How HVAC is Evolving

Is Your HVAC Company Ready for an Economic Downturn? Scott Merritt is the owner of Fire & Ice.