School looks for an efficient system to keep costs down

The campus saw massive growth during the 1990s with its endowment increasing by more than tenfold. It went from a small regional college to a nationally prominent university, even adding a campus — USU Eastern, located in Price, Utah.

As the main campus expanded, so did the need for cooling capacity. A central energy plant was constructed in the northern part of the campus. This facility provides cooling to the bulk of the campus. Since its construction, however, freezing ambient conditions have created maintenance and longevity issues for the open-loop cooling tower system at the university. As a result, USU looked for alternative cooling system options.

“Evaporative cooling capacity for the district system is provided by a six-cell, open-loop cooling tower capable of 6,000 tons,” said Reid Olsen, USU central energy plant manager, who has been at the university for 26 years. “This tower serves the condensers of the water-cooled chillers at the heart of the district cooling system. There are four chillers in all, two of which are rated for 1,800 tons each, and the other two are 900 tons apiece. The cooling towers reject heat from the condenser water loop via evaporative cooling, allowing the chillers to supply chilled water to the campus cooling loop.” 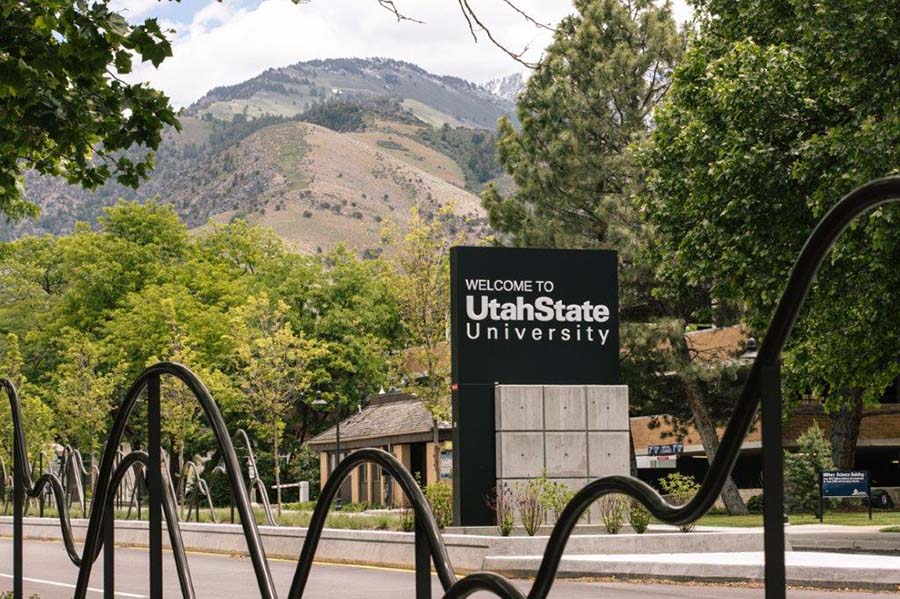 During heating season, the campus cooling load drops by more than 90%. For roughly half the year, only server rooms and a constant temperature room in the library call for cooling capacity. It’s during this time that the university’s maintenance crew battle to mitigate ice buildup damage to the 16-year-old cooling towers.

“We’re at about 4,500 feet above sea level here,” said Olsen. “It’s common that our outdoor ambient temperatures drop below -10°F and stay there for weeks at a time, and -30°F isn’t unheard of.”

Since they were constructed, the cooling towers have been a winter maintenance challenge. Fill media within the towers freezes solid, building up so much weight that ultimately results in damage to the units. After a decade of this, several of the cells required complete fill media replacement at a tremendous expense, despite efforts to combat the issue.

“We stopped using the tower unless absolutely necessary,” said Olsen. “Warming up the condenser water by turning the fans off only lessened the damage. What we really needed was an entirely different solution for the winter months — one that would allow us to completely shut down the cooling tower during the winter.”

Olsen and others on the maintenance crew began discussing alternatives to the open-loop cooling tower for the winter months. The cold, dry conditions are conducive to the use of a dry cooler, and there was still a bit of room on the central plant roof where one could be mounted. A dry cooler is a closed-loop system, which would offer additional benefits for cold weather operation. At the time of construction, the dunnage supporting the large cooling tower had been oversized for the possibility of adding a seventh cell, if the need arose.

Research began, and Olsen found information about several dry cooler models. One of these stood out because it was carried by a local manufacturer’s representative that did extensive work with the university in the past. 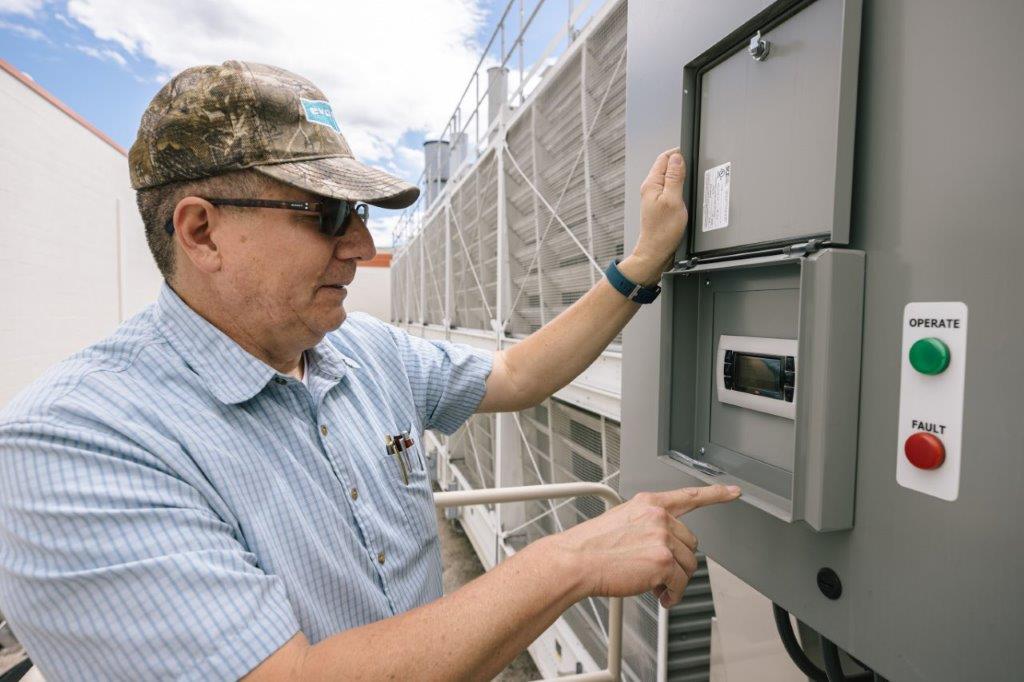 “I reached out to Midgley-Huber Inc. in March of 2019 and was put in contact with Conrad Campos, Midgley-Huber outside HVAC salesman,” said Olsen. “He visited the site, collected load information, and measured the physical space we had to work with on the roof. Much of the information needed by Campos had already been compiled by our consulting engineering firm, Thomas Engineering Co., including the size of all system components and general design.”

The university needs 250 tons of cooling throughout the winter. The biggest constraint was that the total length of the new dry cooler could not exceed 25 feet, which included space for circulation of air around the unit. Campos reviewed the information with Mihir Kalyani, assistant product manager of dry and adiabatic fluid coolers at EVAPCO, for possible solutions.

“Mihir was extremely thorough during the selection process,” said Campos. “We addressed each of the university’s questions and concerns. The goal was to have the ability to shut down the open-loop cooling tower for several months while ambient air temperatures are low enough to satisfy the cooling load with a dry cooler. The university wanted to remain in dry operation as long as possible.”

Meanwhile, the university sought other bids for dry cooler solutions and began early planning with Gary Stevens at Spindler Construction Corp. The company, out of Logan, Utah, was the general contractor on the project, providing coordination and full project oversight.

Ultimately, the decision was made to select an EVAPCO eco-Air series V-configuration dry cooler. The unit’s competitive price, the availability of stainless steel construction and correct physical dimensions, the provision of maximum cooling capacity, and the university’s familiarity with Midgley-Huber made it the winning combination.

“The fact that EVAPCO tests and rates their dry cooler performance per the newly-adopted Cooling Tower Institute (CTI) test code CTI ATC-105DS was also a determining factor for USU,” said Campos. “This means the performance of the unit has been verified, and EVAPCO offers a comprehensive performance guarantee.”

Stainless steel construction for both the structure/casing and coils was an option for the dry cooler, though it wasn’t originally specified. EVAPCO presented the option to A&B Mechanical, Salt Lake City, Utah, and the university recognized the longevity advantage over galvanized construction.

Installation of the new eco-Air fluid cooler took place in July and August of 2019. The campus was mostly vacant for summer break, simplifying crane and truck movement. Spindler Construction handled construction of the cooler dunnage and lifted the unit into place. A&B Mechanical Contractors provided expertise, and the manpower to install all associated piping.

The existing cooling tower dunnage was modified to allow the fluid cooler to be craned to the roof and mounted to maximize space. The closed-loop dry cooler utilizes a 40% glycol solution for freeze protection. As such, a large plate-and-frame heat exchanger was installed to separate the glycol solution circulating through the cooler from the chilled water loop. The plate-and-frame heat exchanger is sized for the maximum 650 gallons per minute (gpm), though it typically circulates at 500 gpm, providing roughly 375 tons of heat transfer capability.

The dry cooler and the heat exchanger together are only utilized for “free cooling.” When the ambient air temperature is low enough the chillers can be turned off and the dry cooler can satisfy the reduced cooling requirement during the colder months.

“Startup and programming of the controls was very intuitive,” said Olsen. “With the cooler set up, all my team needs to do is specify the leaving water temperature; usually about 38°F. Based on the incoming water temperature, typically about 48°F, the intelligent control determines the units’ fan speed. We could even set a maximum fan speed through the factory control if noise was a concern, but that’s not the case here.”

Once the controls were programmed, the unit was started and ran for several hours. It wasn’t actually put into full service until Oct. 1, 2019. Winter ambient temperatures and low cooling load mean the chillers can be bypassed, and the dry cooler can be used to provide the temperatures required by the chilled water loop, saving energy by not running the chillers’ refrigeration compressors. Fluid from the load side of the heat exchanger is pumped directly to the district loop.

“We were able to utilize the EVAPCO fluid cooler as our sole cooling source from October 1 through April 1,” said Olsen. “We’d been running the cooling tower unnecessarily for half the calendar year, and if we wanted to, we could probably push the dry cooler for another two to four weeks. Generally speaking, daytime ambient temperatures need to remain below 50°F for the dry cooler system to satisfy the load.”

For the university, avoiding freeze damage to the cooling tower was the No. 1 priority, but there were other benefits, as well.

Between October and April of the previous season, the open-loop cooling tower system consumed 871 megawatts of electric energy. During this past season, which was a milder winter than usual, the dry fluid cooler and associated components used 691 megawatts; a full 21% energy reduction.

Maintenance expenses fell as well. In addition to reducing damage to the cooling tower and wear and tear on chillers, fans and pumps, using the dry fluid cooler reduced man hours needed to monitor and tend to the cooling tower system. It also reduced the amount of water treatment chemicals needed for the open-loop tower.

“We’re fortunate in that Logan has cheap, ample water,” said Olsen. “We haven’t tracked our water savings through this improvement, but if we were located somewhere with scarce water, we’re certain that the new cooler would provide a significant fiscal and environmental improvement. We’ve also found that having the cooling tower off for half the year affords us plenty of time to conduct maintenance on the open-loop system.”