Cannabis farms are cropping up around the country, often encroaching on existing communities, and property owners are starting to complain about their distinct smell. In response to these complaints, local governments and municipalities are mandating new laws — or even suing the growers — to significantly reduce the smells emanating from these facilities.

This is an ongoing challenge for cultivators, many of whom are more familiar with growing high-quality cannabis than addressing odor issues. Fortunately, odor mitigation is possible with a variety of air cleaning technologies that are designed to alleviate the strong, pungent cannabis odors that can severely impact the property values in the surrounding community.

Cannabis grow facilities can produce a constant source of odors, but there are certain times in the plant’s cycle when odors are more pronounced, such as when the flower is budding, said Aaron Engel, vice president of business development at Fresh-Aire UV.

“The terpenes and terpenoids are typically the source of the odor and are produced by the cannabis plants,” he said. “Even the different types of cannabis can have different odor profiles. For example, Cannabis indica is often described as skunk-like, whereas Cannabis sativa is described as sweet or spicy. Although strains may vary, their complex chemistry makes odor control within the facility challenging.”

“Another challenge is that odor is usually not generated in just one location of the facility,” he said. “There are three sources of odor: the final weeks of growing, the drying process, and the trimming process, so the odor needs to be controlled at each of these stages of production.”

The type of structure involved can cause challenges, too, noted Thiel, as greenhouses are designed to breathe, which makes odor control more difficult.

The same is true for indoor operations that are housed in retrofitted buildings that are poorly sealed or have improper air balancing, which allow the odors to bypass the odor control devices and escape through fugitive routes.

While most cities, counties, or municipalities require grow facilities to have an odor mitigation plan in place before they will issue an occupancy permit, they rarely define which type of system a grower needs to utilize, said Gary Wintering, president of Fogco Environmental Solutions.

“They do require that the system work effectively, and they can shut down facilities that have an ineffective odor system in place,” he said. “Typically, the municipality leaves the choice up to the grower, although we have seen more municipalities asking us for specific documentation confirming our system’s effectiveness. Field-based testing is the only objective way to obtain this level of certification.”

There are various technologies available that can help address odor issues both inside the facility and, more importantly, those that may be exhausted to outside, said Engel. These typically include carbon filtration, masking or neutralizing agents, air treatment systems, and oxidation systems.

“Many facilities are not overly concerned about odors within the building but are very concerned about the odors being exhausted,” he said. “Depending on municipal regulations, the facility may require an in-line IAQ system to address the exhaust odors. Activated carbon and oxidation systems are ideal for addressing these odors.”

Care must be taken with high-output oxidation systems, noted Engel, as these produce ozone, which — along with other reactive oxygen species — should not be used within the envelope of the building, as the aggressive oxidizers may damage the sensitive plants. 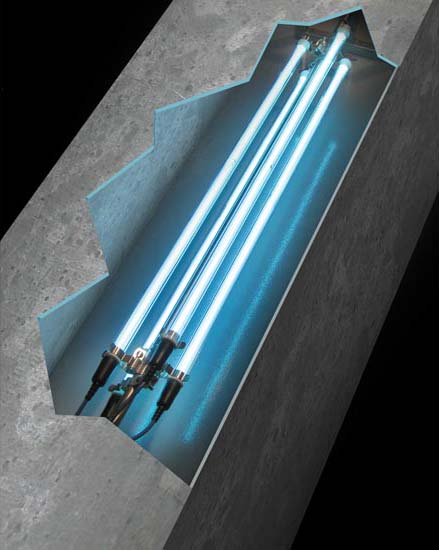 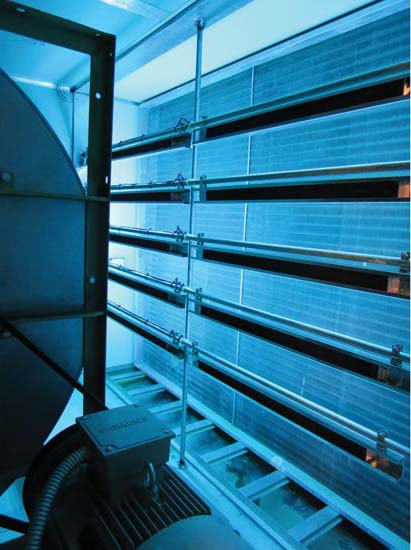 “For high-level odor control for exhaust applications, Fresh-Aire UV uses the Odor Exhaust Oxidation (OEO) systems,” said Engel. “These are specially designed high-output UVV lamps that produce ozone, oxidizing the outgoing air. What’s great about the Fresh-Aire OEO system is that it can treat the air with no airflow restriction, and the only consumables are the UVV lamp that needs replacement every two years. It’s a low-cost, easy installation that works exceptionally well.”

Odor mitigation systems using neutralizers are also used in cannabis facilities, and they can typically be classified into two different categories: perimeter treatment of a facility or point-of-source treatment of the odor, said Wintering. Perimeter treatment includes an oil-based neutralizer that is used with either a water-based evaporative system or a water-based high-pressure fog system. Point-of-source systems involve air filtration combined with water-based high-pressure fog and an oil-based neutralizer. 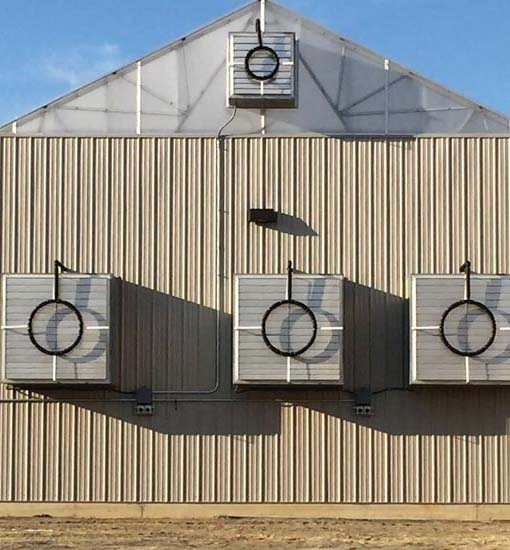 POINT OF SOURCE: The majority of Fogco systems utilize the point of source odor elimination concept, so they are incorporated into the operation of the exhaust fans of a facility.

“The newest technology for point-of-source odor mitigation is the use of a vaporized oil-based neutralizer,” he said. “The advantage of this technology is that is does not involve the use of water, so it is better suited for environments where freezing can occur.”

It is important to note that the oil-based neutralizers offered by Fogco are not a masking agent, said Wintering; instead, they eliminate odors through a process called subtractive odor control, which simply means changing the way a given odor smells.

“Essentially, when these oils are dispersed within the fog or vapor system, they come into contact with the odor molecules, and through a combination of chemical reaction, antagonistic pairing, and absorption/adsorption pluralistic effects, the odor is neutralized and eliminated as the air exits the facility,” he said.

For indoor growing facilities, another odor control option is the molecular filter, considered to be a gas phase air cleaning device, said Thiel. Molecular filters contain a media designed to adsorb a specific subset of molecules to eliminate odors, irritants, and toxic or corrosive gases. In this case, they target beta-myrcene, which is the terpene (aroma-producing organic compound) most frequently found in cannabis.

Molecular filters are typically incorporated into an HVAC system, and they can either be initially supplied with the system or else retrofitted at a later date. In an exhaust system, a face velocity of 250 fpm is desired for maximum lifetime and removal efficiency, said Thiel. However, if 250 fpm is not achievable, a maximum face velocity of 500 fpm cannot be exceeded.

“It is recommended that a minimum of MERV 9A particulate prefilters be installed ahead of a molecular filter to ensure that the active sites are not unnecessarily filled with particulate,” he said. “A dusting filter is not necessary unless there is a concern for activated carbon dust from the exhaust stream.”

For greenhouses, molecular filtration may not be enough on its own, said Thiel, so the recommended method is to combine two technologies: molecular filtration deployed in a recirculating air cleaner inside the greenhouse and a dry-vapor system that neutralizes the fugitive emissions externally. This type of system is offered by Byers Scientific & Manufacturing, which treats over 9 million square feet of canopy throughout North America, including the world’s largest permitted cannabis facility in Canada.

“The Byers’ system uses patent-pending technology to emit an odor neutralizer formulated specifically for cannabis around the greenhouse or other grow environment, such that the airborne cannabis gases emitted from the facility mix with the neutralizer, thereby eliminating the odor,” said Marc L. Byers, owner of Byers Scientific & Manufacturing. “We employ Camfil scrubbing media as part of a comprehensive approach: vapor for the outdoor applications and Camfil molecular filtration on indoor applications in order to fully sequester terpenes wherever possible.”

Thiel added that for odor control, customers should be encouraged to purchase equipment that offers proof of performance. Molecular filtration solutions, for example, should have their performance validated in accordance with ASHRAE Standard 145: 2015 and/or ISO 10121: 2014, which are recognized test standards for gas phase air cleaning devices.

As can be seen, there are a variety of methods available to control odors in cannabis grow facilities. For HVAC contractors just starting in this market, the choices may seen daunting, but they don’t have to be, said Wintering.

“Look for vendors with backgrounds and experience in industrial odor control who have also been involved in the cannabis industry for at least the last five years,” he said. “Do your homework. Talk to growers. And finally, get input from multiple odor mitigation suppliers to be sure you are getting what you need.”