Distributors prepare for a year of success

“Study the Present, Influence the Future.”

The top line at the website for Heating, Air-conditioning & Refrigeration Distributors International’s (HARDI’s) 2019 event represented truth in advertising. That mission ran through a diverse set of breakout sessions and keynote speakers over four days in downtown New Orleans last December.

The consistent focus extended through a comprehensive app to help attendees plan, track, and follow up on content they found interesting. Members, in turn, responded positively and came to engage, as evidenced by a packed ballroom for an early Sunday morning breakfast in a city that lends itself to early-morning no-shows.

He was joined by a panel of the association’s own Tim Fisher (leader of market intelligence) and Dan Vida (unitary market analyst) along with Deepa Raghavan (senior analyst, Wells Fargo Securities).

Their extensive look into the size and state of this channel wrapped up by asking one question: What drives value in the eyes of contractors and suppliers today? Here are some of the panel’s observations. 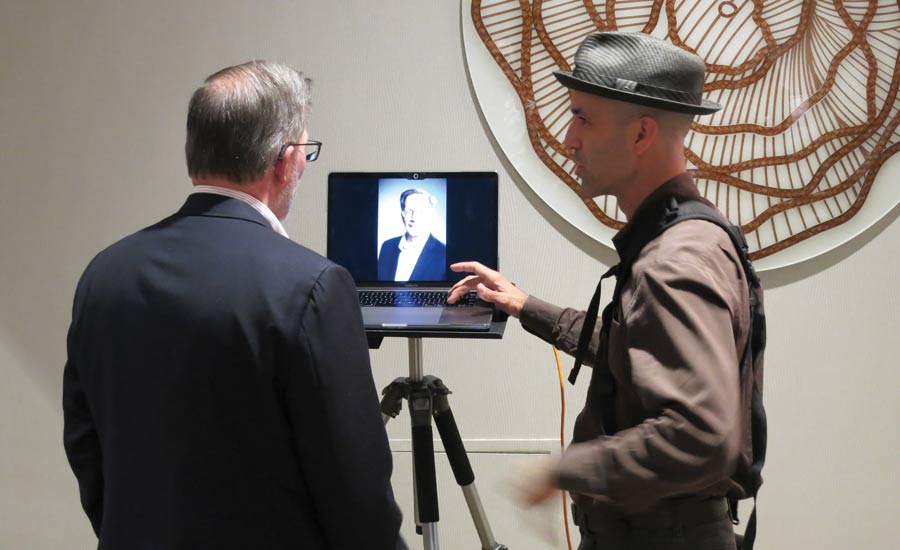 IMAGE ENHANCEMENT: One bonus for attendees mingling between sessions: a photographer offering free headshots to use for promo and marketing.

IoT is here. Distributors must proactively solve challenges that IoT presents in residential and light commercial. However, the common theme in controls channel is “mistrust” — between suppliers, distributors, and contractors. Lack of collaboration translates to the least efficient and most messy way of doing business.

Elsewhere, feedback indicates that product availability is the most import factor for contractor buying patterns and should be the No. 1 value proposition for distributors. Gee noted that in an attractive lending market, it’s easier to have larger inventory and to look better on that front.

Related, their research found that a contractor’s loyalty to a distributor could be hanging on a single point of contact and their availability at a given moment. Basically: “We love John/Jane, but if they’re not there, I’d rather go somewhere else.” 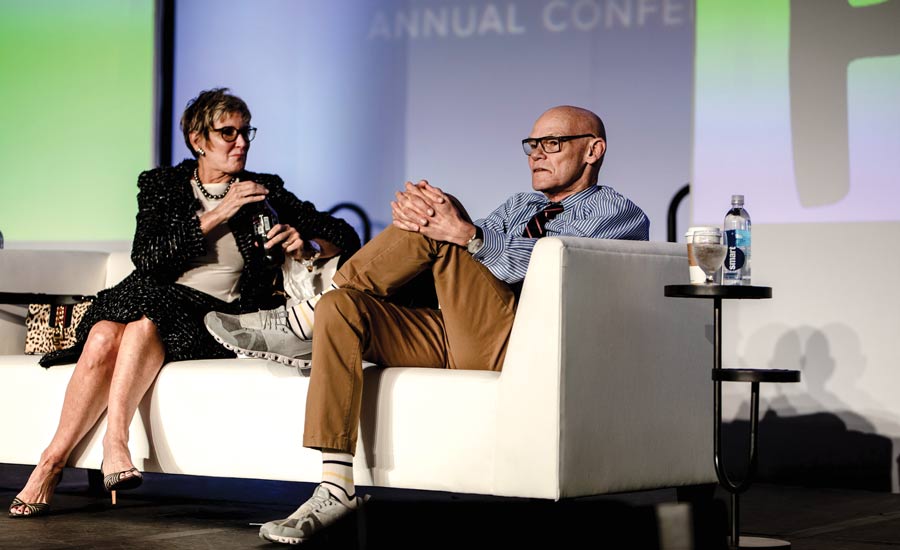 PUNDITRY POWER COUPLE: Mary Matalin and James Carville flashed some socks and witty banter about the politics of the day for the crowd at Tuesday’s midday session. PHOTO COURTESY OF NICOLE LEONÉ MILLER

The panel concluded that too many distributors are too reliant on a few stars in key positions, adding that such a strategy may also be insufficient in a tight labor market.

Finally, the HARDI staff said, contractors are not valuing organized training, but they are expecting on-demand expertise and technical support. There is clear conflict between manufacturers’ expectation for training delivery and contractors’ appetite for it, the research suggested. This discrepancy came up elsewhere at the conference, and distributors may naturally find themselves in the middle of the challenge to bridge that gap.

Gee finished by identifying controls as a channel containing more than its share of confusion, rising in his estimation from a lack of proactivity by nearly everyone in it. Gee sees controls as an area where distributors can step up, and where manufacturers rely on them to have the pulse of what’s going on in the field.

While attendees at Pulse 2019 were a polite and patient bunch, one session did focus on how to get medieval on the competition. “Commercial Product Moats: How To Create Demand As A Channel” featured a panel conversation hosted by CFM Distributors vice president Brad Telker, using the “moat” concept to explore the core question. Chris Forth of JCI Ducted Systems framed it as, “How do we work together as manufacturers and reps and contractors to build moats to protect all of us?” 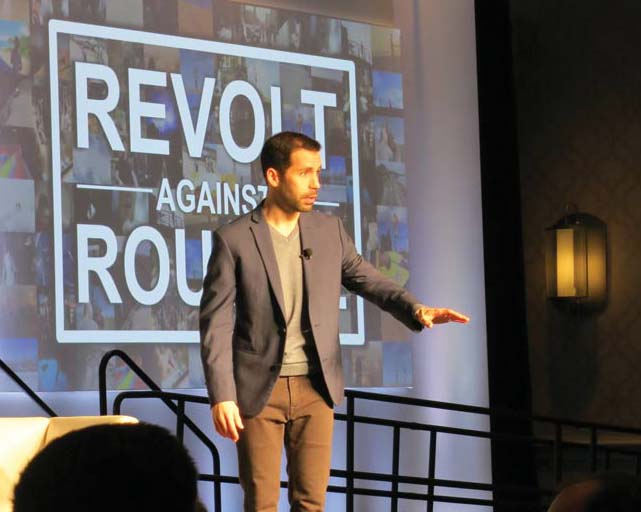 CHANGE IT UP: Marketing “chief troublemaker” Dustin Garis delivered a keynote focusing on creating life experiences and how disrupting daily routine can benefit employees, customers, and the bottom line.

One metaphor still recognized by a room of distributors is the VCR. Its product lifecycle curve showed that a business enjoyed a lot of margin if it got into the VCR business in 1975, whereas the margin decreased considerably if you entered that area a few years later. Why? Because the first group enjoyed the added fruits of “demand creation” — presenting a solution that customers didn’t know they needed.

Joe Nichter, president of Comfort Systems USA, Southwest, offered an example that has worked for his team: kitting. Mechanical piping is 40 percent more efficient to do in the shop, he said. So a team does kitting and pre-packaging in the warehouse to improve productivity in the field.

“It’s getting more expensive to have people in the field,” Nichter noted. He would “rather them not be ripping up and breaking down boxes, as opposed to doing actual installing.”

Expanding into an underserved commercial sector can represent another moat for distinguishing and diversifying a company. 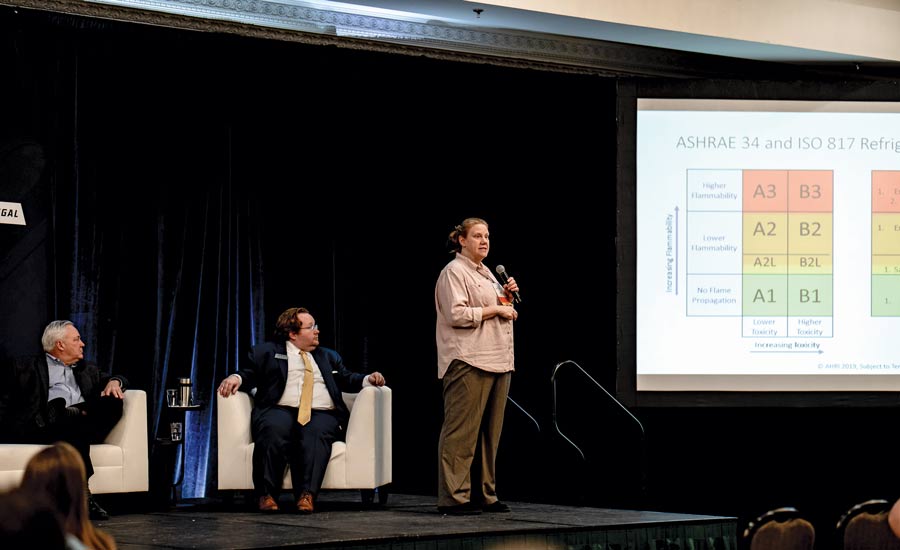 HOT TOPIC: AHRI vice president of regulatory affairs Helen Walter-Terrinoni offered a part refrigerant primer, part current affairs update about the evolution of flammable refrigerant use in the U.S. and what it means for the industry.

Start small, and go out to contractors to see what they need, advised the group, including Scott Pierson, business leader at HAVTECH/THERMALTECH, and Andy Armstrong, vice president of sales and marketing for Fujitsu General America.

In their experience, the distributors that succeed in this effort chose an incremental step to pursue that “doesn’t change your whole world.” Then they ask what-if’s and look for gaps to take another step, and then another into that space.

Another tip: “Focus on the unitary rooftop market.”

It doesn’t require getting overly technical in a lot of places, and it includes the upside of millions of units out there needing work or maintenance.

THE FUTURE BY THE NUMBERS

Businesses like certainty, and that includes “knowing” what the future holds whenever possible. Two speakers gave the attendees a healthy serving of predictions and generational comment along with their lunch. 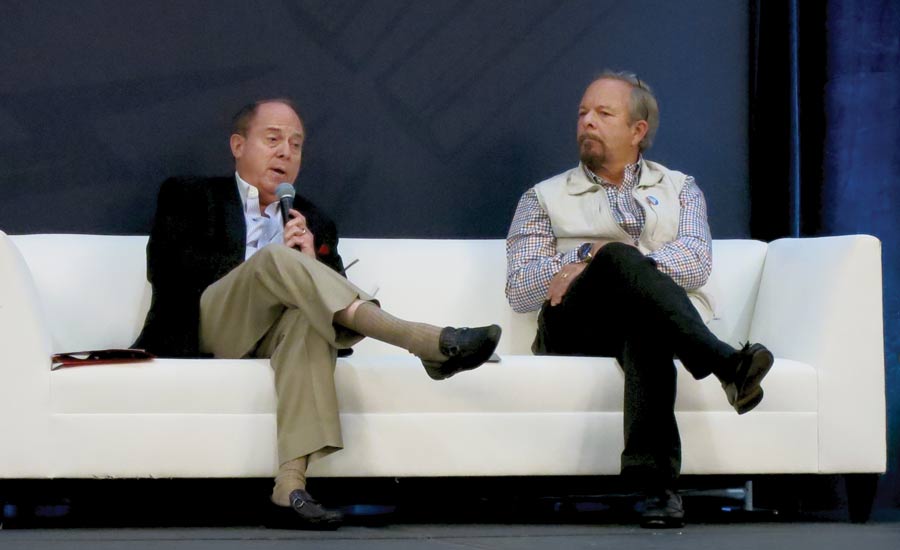 CONTRACTOR CHAT: Part of the effort to improve understanding between distributors and contractors involved an ACCA-sponsored panel. Here, Lee Rosenberg of Rosenberg Indoor Comfort and Lanny Huffman of Hickory Sheet Metal talk about what they value most in a distributor relationship.

A “basset hound” is the thing your business does that it should stop doing, explained Alan Beaulieu, president of ITR Economics. Millennials, also referred to as Gen Y, are the best at identifying basset hounds in an organization, he advised, because they think differently.

As for the economic future, Beaulieu offered a raft of graphs, offering that while manufacturing may continue to muddle along in the first half of 2020, the macro conditions in general bode well for HARDI this year. Longer term, Beaulieu expects some level of recession around 2023 and then a serious depression, falling coincidentally a century after the Great Depression of the 1930s.

In another fast-paced presentation, demographer and author Ken Gronbach challenged a general session to use population changes as a sort of blunt but effective instrument for understanding events both in and out of the industry.

HARDI members, he predicted, will “have all the business you can handle” in coming years, and moreover, “all the labor you will ever need.”

He said that he accordingly does not expect a recession, especially in this sector, because 88 million Gen Ys will need somewhere (or somewhere nicer) to live and “we are 25 million housing units short” of that increase in demand for housing.

Speaking of that generation, Gronbach was emphatic in his advice to hire Gen Ys. He listed some prevalent Gen Y positive characteristics, such as flexibility, integrity, and technology competence. Plus, he added, they will tell you what to say and how to sell to other Gen Ys. What they will not do, he warned, “is work for mean people.”

In addition to noting how homogenous the crowd was as a whole, Gronbach later offered up a statistic that a woman is 10 times less likely to commit a crime than a man.

“Remember that,” he told the room, “the next time you hire a CFO.”

Recipients were chosen based on engagement with the HARDI organization in the three respective areas. Recipients included: