Using (or Abusing) the R-22 Phaseout as a Sales Tool

Some contractors selling equipment on fears that refrigerant will be illegal

As of January 1, 2020, it will no longer be legal to produce or import virgin R-22 in the U.S., but that does not mean the refrigerant will be unavailable, unaffordable, or illegal to use. It just means that after that date, contractors who service R-22 systems will have to rely on existing stocks of virgin refrigerant or else use reclaimed refrigerant, both of which should be readily available (and affordable) for a long time, according to industry experts.

Those facts have not stopped some contractors from trying to convince their customers that they need to replace their R-22 systems, even though they may be working just fine. In fact, some are advertising that the use of R-22 will be illegal — or prohibitively expensive — after this year, so homeowners need to buy an R-410A system now before that happens. Not helping the situation are local newspapers that are publishing articles containing misinformation, such as “if your unit breaks down or runs out of refrigerant after January 1, you can expect to spend a good chunk of change, as new R-22 will be illegal to obtain,” or “[homeowners should] bite the bullet and get a whole new system, which could set you back anywhere from $8,000 to $12,000.”

Scaring consumers into buying a new cooling system is not helpful for the HVACR industry, particularly when most contractors work hard to establish their reputations as being honest and trustworthy. That’s why technicians at Fox Family Heating and Air Conditioning in Sacramento, California, spend a lot of time debunking the myths associated with the phaseout of R-22, said owner Greg Fox.

“Our techs let customers know that R-22 is being phased out and that in 2020 manufacturers simply can’t produce any more virgin R-22,” he said. “Unfortunately, some companies are telling folks they either can’t work on their R-22 system anymore — or else they have to buy a new system — because R-22 is going to be ‘illegal starting in 2020.’ Either technicians are being misinformed by their companies, or they are blatantly lying to get the new equipment sale.” 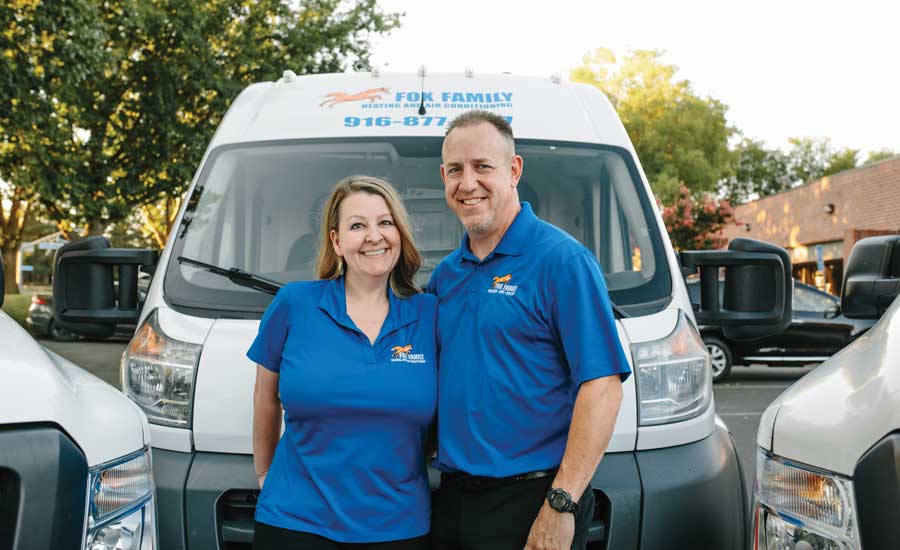 DEBUNKING MYTHS: Greg Fox, shown here with his wife and vice president of the company, Melissa Fox, said that their technicians spend a lot of time debunking myths surrounding the R-22 phaseout.

About 50 percent of customers at Fox Family Heating and Air Conditioning still have R-22 systems, and Fox does not believe it is a good idea for contractors to scare homeowners into replacing these systems based on the upcoming phaseout.

“If any of our techs misled one of our customers by suggesting they replace their system, say on a preventive maintenance or HVAC or home inspection, it would not be in line with what we’re trying to do here at Fox Family,” he said. “We feel that if customers are ready to change out their systems, we’ll be here for them. But if they are only looking for a repair, we’re here for that, too.”

This issue has become such a big problem that ACCA felt the need to release a statement saying that there will be enough stockpiled and reclaimed R-22 to allow for a smooth transition period. The organization added that refrigerant manufacturer Arkema (one of ACCA’s corporate partners) estimates that there is sufficient R-22 to serve the market needs for at least five years.

Jay Kestenbaum, senior vice president of sales and purchasing, Aspen Refrigerants, agrees, noting that “R-22 is readily available now and will be readily available well after 2020. While virgin production and importation is ending this year, the industry has a level of stockpiled R-22 available, as well as a robust reclaimed R-22 supply pipeline, which is anticipated to meet market demand for decades to come. As an industry, we’ve been here before, with the production phaseout of R-11 and R-12, and both refrigerants are still available today in ample supply via the reclaim market.”

That means there is no need for consumers to proactively replace their R-22 systems, provided they are happy with their performance and the equipment is still working well.

However, customers are listening to the news reports, and some are contacting their contractors to find out how the upcoming R-22 phaseout will affect them. Kellie Loudin, vice president of Rumer-Loudin Inc., which has locations in St. Clairsville, Ohio, and Barnesville, Ohio, recently received a phone call from an elderly customer who thought she heard on the news that she had to replace her air conditioner because the refrigerant would not be available next year.

“I also had a friend living in the Washington, D.C., area express concern because her contractor told her that her air conditioner would only be repairable for another year because the refrigerant would not be available,” said Loudin. “Neither of these beliefs are true. I am concerned that misinformation and unscrupulous contractors will twist the true state of refrigerant supply, especially R-22. To make people believe there are no other options available borders on dishonesty.”

About 65 percent of Loudin’s residential customers still have R-22 systems, most of which are in good working condition. That said, she strongly believes in educating her customers, so when technicians are servicing a unit, they explain the upcoming phaseout, the cost of R-22, and provide a quote for a new unit, if that’s what the customer desires. 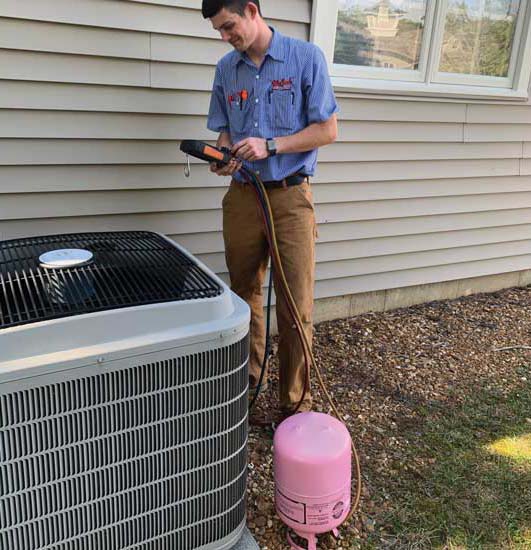 LEVELING UP: Service technician Garrett Vancil from Welsch Heating and Cooling Co. checks refrigerant levels in a system. About 25 percent of their customers still have R-22 systems.

“We believe in full disclosure, not misinformation,” she said. “We have some customers who proactively approach the situation, but rarely do we remove a working unit. Instead, we are often asked to ‘just get the unit through another year.’ People seldom plan ahead for such huge expenses, so they nurse it along until it is no longer financially smart to keep putting money into their current system.”

About 25 percent of customers at Welsch Heating and Cooling Co. in St. Louis, Missouri, still have R-22 systems. On service calls, their technicians take the time to explain the R-22 situation and discuss the pros and cons of replacing a unit, but the majority of customers will wait until there is a failure and/or a leak that would require an expensive repair, said service manager Denise Webb.

“We have to be very careful in this regard, as our company does not want to be considered ‘pushy’ — we don’t want the customer to feel that we are pushing them to make a purchase they may not feel is necessary,” she said. “A few customers have contacted us regarding the phaseout, and when that happens, the sales department is careful not to give the customer the impression we are pushing them into buying something. In other words, we just explain the facts and let them decide.”

The phaseout has been mentioned in Welsch’s newsletter that is sent out to its 16,000 customers; however, Webb said that it was for educational purposes only — it was not used to give the impression that the “sky is falling” if customers don’t replace their R-22 units. 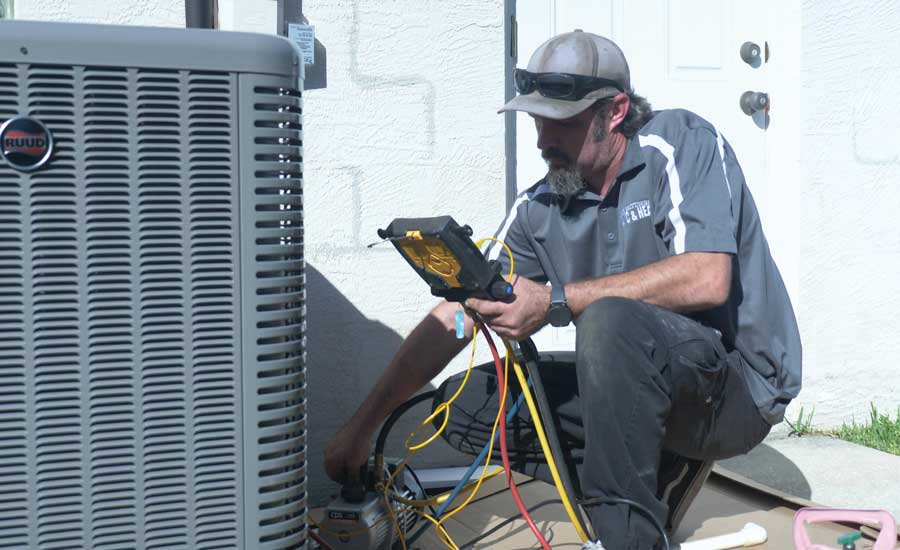 Customers have not yet contacted William Brittingham, vice president of Jerry Brittingham A/C & Heat Inc. in Daytona Beach, Florida, about the upcoming phaseout. About 20 to 30 percent of his customers still have R-22 systems, but virtually all of these units are 10-plus years old, and given their regular exposure to salt air, most are considered to be at or near the end of their lifespans anyway.

“The vast majority of homeowners just don’t seem to be concerned with the type of refrigerant they are using,” he said. “It only becomes a concern when their repair requires R-22; then there is a conversation about the cost to make the repair versus the cost to replace the system.”

Assuming the R-22 system is running safely and efficiently with no signs of any impending leaks, Brittingham said his technicians would not encourage a homeowner to replace the unit.

“To me, that’s like replacing your roof because they discontinued your shingles — even though you don’t need any shingles right now,” he said. “Alternatively, if the system has signs that it may leak or have major problems in the near future, it is our job to inform the customer of the condition of the system and their options, regardless of the refrigerant type.”

For now, R-22 remains relatively easy to obtain, and its cost has actually decreased over the last year. That’s what homeowners with R-22 units need to know, but they may not be getting that message if some companies are dishonest about the phaseout.

“Telling a customer that it’s illegal to service an R-22 system on a false premise — such as the company could lose its state license as a result — is not only misleading, it just adds to the already-sketchy reputation of our industry as a whole,” said Fox.