This website requires certain cookies to work and uses other cookies to help you have the best experience. By visiting this website, certain cookies have already been set, which you may delete and block. By closing this message or continuing to use our site, you agree to the use of cookies. Visit our updated privacy and cookie policy to learn more.
Home » Offer Ductwork Maintenance as a New Service, Source of Revenue
Indoor Air QualityVentilationDuct CleaningDuct Products

Offer Ductwork Maintenance as a New Service, Source of Revenue

Air distribution systems come in many shapes and sizes, each with their own benefits and maintenance protocols. Proper installation is imperative, but once initial setup is complete, that doesn’t mean the contractor’s job is done. Although ductwork doesn’t require quite as much maintenance as other HVAC equipment does, there are steps to be taken to ensure its longevity, safety, and efficient operation. Some of these steps may even have the possibility to yield new revenue streams for HVAC contractors.

Metal ductwork is a common choice for air distribution. It can be made of many different materials and used in diverse applications. According to Chip Parsley, national sales director for Eastern Sheet Metal, Cincinnati, metal ductwork is dependable and durable. The company manufactures spiral, oval, and square ductwork and says the only areas that need to be regularly monitored with this type of ductwork are cleanliness and possible joint air leaks.

“Over time, ductwork can get a buildup of dust that might need to be cleaned out,” said Parsley. “Also, you would need to check the canvas connections to make sure they are not cracking or leaking air.” 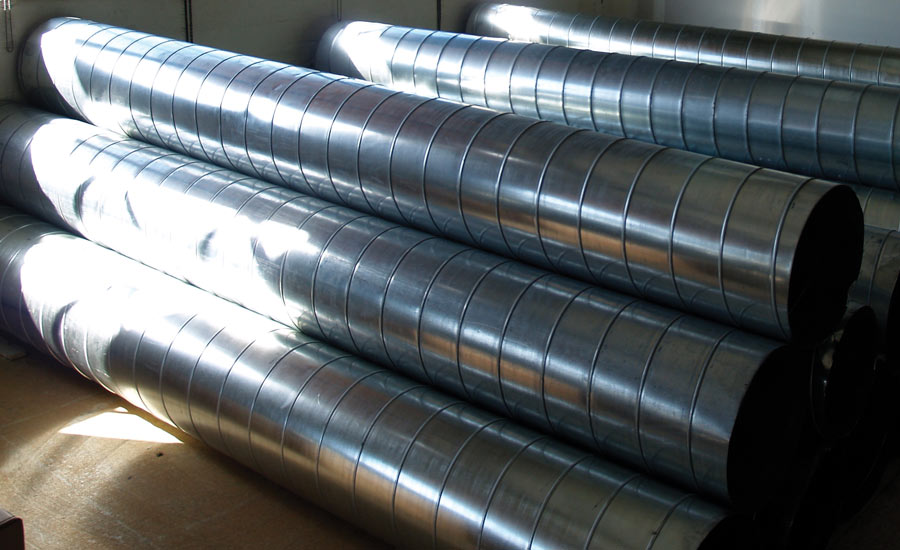 CLEAN IT UP: The best way to clean metal ductwork is to hook up a commercial cleaning vacuum and push all the dirt and debris back toward the vacuum.

Parsley explained that the best way to clean ductwork is to hook up a commercial cleaning vacuum and push all the dirt and debris back toward the vacuum.

“If the filters are kept up to date, you might go the whole life of the HVAC system without needing to clean the duct,” he said. “Usually, the only systems that need to be maintained or cleaned are the ones that move product like corn or wood chips in an industrial setting.”

Despite low maintenance requirements, there are still installation and safety matters that should be considered. When it comes to installation, Eastern Sheet Metal asks that contractors follow the standards set by Sheet Metal and Air Conditioning Contractors’ National Association (SMACNA). Varied applications create variable support requirements based on the size of the ductwork, all of which are outlined in the SMACNA standards. As for safety considerations, Parsley said that securing ductwork properly, especially right at the air-handling unit where the ductwork weight can be substantial, is important.

A post-installation revenue stream from this type of ductwork isn’t common, but Parsley suggested that contractors explore damper maintenance for an air-handling unit for financial possibilities.

“As time passes, outside air and return dampers lose their ability to seal, so they will need to be replaced after approximately 10 to 15 years in service,” Parsley said. “This could be done by going to older buildings and working with maintenance staff to sell them this service.”

Flexible ductwork tells a different story about best practices than metal ductwork. Although relatively maintenance-free, the installation and replacement of this ductwork are crucial to its functionality. 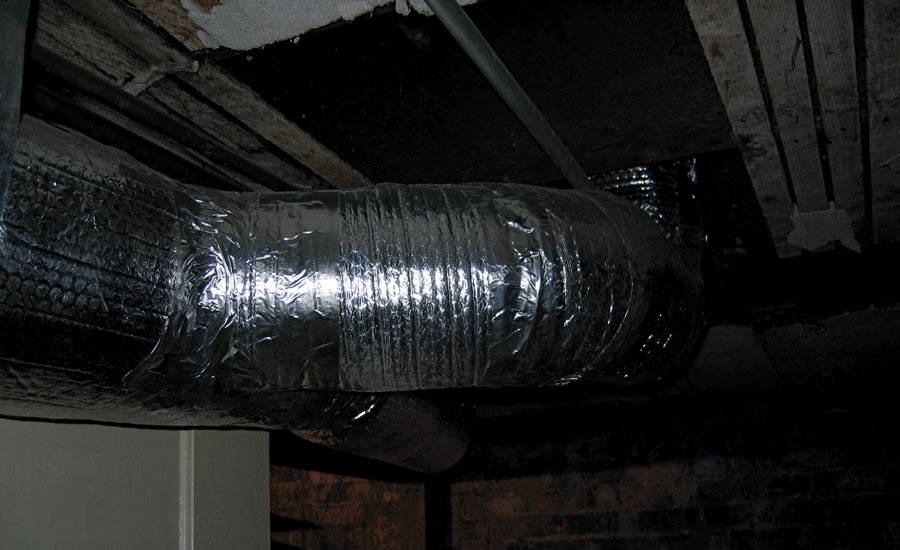 “If the duct is compressed by 15 percent, the friction rate doubles; a 30 percent compression increases the friction rate by four times,” he said. “This leads to a poorly performing air distribution system, but the issue can be simply corrected by pulling the duct taut and cutting the piece to the correct length prior to installing.”

Two other common mistakes, according to Shelton, are snaking and severe bends. Snaking is defined by the Air Duct Council (ADC) as making unnecessary direction changes that produce excess pressure drop. This practice not only adds to installation cost, but it also increases the friction and subsequently the operational costs while decreasing performance. Shelton suggests that contractors take the most direct route. Severe bends in the flexible duct have much the same results as snaking and not fully extending the ductwork.

“The bend radius of the duct should be, at a minimum, one duct diameter,” he said. “For example, a 10-inch duct should have a 10-inch bend radius. This can be easily corrected by starting the bend sooner and making it more gradual.”

JP Lamborn Co. is a member of the ADC and when asked about the cleaning of flexible ductwork, Shelton referred again to the ADC. The council states in best practice documents that it does not recommend that flexible ductwork be cleaned, which the association defines as dust and debris removal. In fact, it advises those who believe their flexible ductwork is in need of maintenance to consider replacing it instead.

“Whenever dust and debris removal is considered, the owner should consider flexible duct replacement, especially if the air distribution system is 15-plus years old,” Shelton quoted the ADC. “The opportunity to replace a duct system using new ducts that meet or exceed current R-value insulation requirements and much tighter installation methods would not only provide clean ducts, but also provide lower energy costs to operate the system.”

Shelton agrees with the ADC that revenue streams can be found in reminding homeowners of the benefits of upgrading their ductwork when replacing their old and worn out a/c unit.

Fabric ductwork focuses on proper design when it comes to achieving maximum efficiency and minimal operational costs. According to Nick Kaufmann, director of manufacturing and engineering for Ductsox in Dubuque, Iowa, the No. 1 mistake that needs to be addressed is poorly designed systems.

“The amount of air available for delivery out of registers is based on the amount of cfm and static pressure,” said Kaufmann. “The more static pressure a system has, the more air is pushed out of each register. If all these factors are not calculated properly, a system can easily have too much air coming out of one end of the system.”

The company stresses that once designed, contractors should always follow manufacturer installation instructions. Maintenance for the fabric ductwork is twofold — hangers and fabric. When it comes to the hangers, Kaufmann explained that the hanging devices should be reviewed every couple of years. As for the fabric itself, cleaning is only suggested every five to seven years and can be accomplished in multiple ways. The first is to use a vacuum or compressed air to remove dust and debris. According to Kaufmann, this type of cleaning can be done on a more regular basis if desired. The second type of cleaning is the actual removal and washing of the fabric ductwork.

“Instead of needing to clean them at ceiling level, fabric can be easily taken down and washed in commercial washing machines,” he said. “With this in mind, a contractor could invest in washing machines for cleaning fabric ductwork as a new revenue stream.

“Out-of-the-box thinking will land clients that others may be overlooking,” he added.