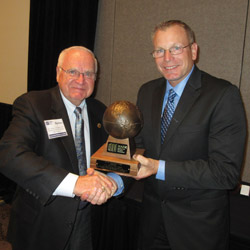 H. E. “Barney” Burroughs was presented with the National Air Filtration Association’s (NAFA) Lifetime Achievement Award by Chris Zaker, incoming NAFA president, at the organization’s annual conference. Burroughs has been in the filtration and air cleaning industry since 1965 when he took over the market development project at the Marbon Chemical Division of Borg-Warner to introduce a new patented gas phase sorbent developed at York, which he helped name Purafil. Two years later, he started his rep firm in Atlanta, H. E. Burroughs and Associates, which later became Filtration Engineering Inc. He represented Purafil, as well as Flanders and Roto-Aire (a spin-off of Farr) in the southeastern states with an office in Puerto Rico, as well.

In 1969, he acquired the Purafil patent and related business from Borg-Warner and founded Purafil Inc. He led Purafil to become an international leader in gaseous filtration and protection of equipment, components, occupants, documents, and objects d’art from contaminants of hostile environments. After being acquired by the Larkin Group in 1986, Burroughs left Purafil to take a leadership role in ASHRAE, where he was elected president in 1987.

After 9/11, Burroughs represented the interests of filtration technology on a number of task groups and presidential ad hoc committees dealing with available and appropriate responses to accidental, criminal, or terrorist activated challenges to the indoor environments of buildings. This culminated in the development of ASHRAE Guideline 29 on Building Security and Protection. Burroughs represented filtration and air cleaning on a blue-ribbon task force to develop the IAQ best practice manual and authored the chapters on filtration and air cleaning as well as the application of the IAQ procedure. Most recently, he participated in the development of an ASHRAE position document on filtration and air cleaning that will provide guidance to users as well as researchers on needs of ASHRAE.

Through his company, he was a corporate manufacturing member of NAFA in its early formative years and has been a professional member since the early 1990s, having given several technical presentations at annual and technical meetings. He chaired the filtration section of the ARI-sponsored research activity (CR-21) and managed laboratory research projects regarding the efficacy of UVGI for coil cleanliness and the role of MERV efficiency in coil cleanliness and energy conservation.

“Through Barney Burrough’s efforts and commitment to the air filter industry, we are all more knowledgeable, further along in development and better and more professional as an industry,” said Harry Allen, outgoing president, NAFA.