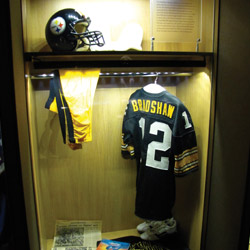 Bradshaw will serve as the spokesperson for Ferguson’s contractor business, which consists of commercial and residential plumbers, HVAC contractors, waterworks contractors, builders, and remodelers.

“When choosing a spokesperson, we wanted someone who could easily relate to our professional trade customers,” said John Gillespie, Ferguson’s director of marketing. “Terry is an excellent fit because of his winning record on and off the field, and his professional yet humble style.”

The partnership will kick off with the launch of a new rewards offering for Ferguson’s customer loyalty program, Ferguson PRO Plus™. Bradshaw will appear in all Ferguson PRO Plus promotional materials, including print, online, and national radio advertising.

“I’m really looking forward to partnering with the fine folks at Ferguson,” said Bradshaw. “They strike me as a company that does what they say they’re going to do. They act with integrity and treat their customers and fellow associates like family. These are values that are important to me too.”