The electrification of commercial buildings has been a major environmental trend for the last few years, but expect that to become an even larger issue in the years to come. That’s because legislation at both the state and federal levels is offering a number of financial incentives that are designed to encourage building owners and operators to replace their gas-fired space heating appliances with electric alternatives such as heat pumps.

As end users look to take advantage of these financial incentives, they will turn to HVAC contractors to help them decide which electric equipment makes the most sense for their facility. This will present a prime opportunity for contractors to expand their businesses and deepen their relationships with customers who are counting on them to lead them on a successful journey to electrification.

Building owners looking to replace their gas-fired heating units have a wide range of electric HVAC equipment from which to choose. However, certain factors such as geographic location, building size, and existing equipment will determine the type of new system that will best serve a building’s needs, said Rob Landes, product manager for Daikin Applied.

“Geographic location will drive what medium you want to get the heat from,” he said. “For example, in a cold climate, it’s more challenging to get heat directly from the outdoor air, so a partial or full water loop that draws from geothermal or recovered process heat may work best. That said, there’s an industry movement to create better performing air-source heat pumps for cold climates, so there will be a lot of advancements in this arena.”

As for the size of the building, Landes said that this comes into play particularly with larger-scale buildings such as big hospitals or campuses. For schools, rooftop equipment might make the most sense, he said, whereas with office buildings and hospitality spaces, water-source heat pump terminals might be a better option.

The existing equipment also plays a role, he said. 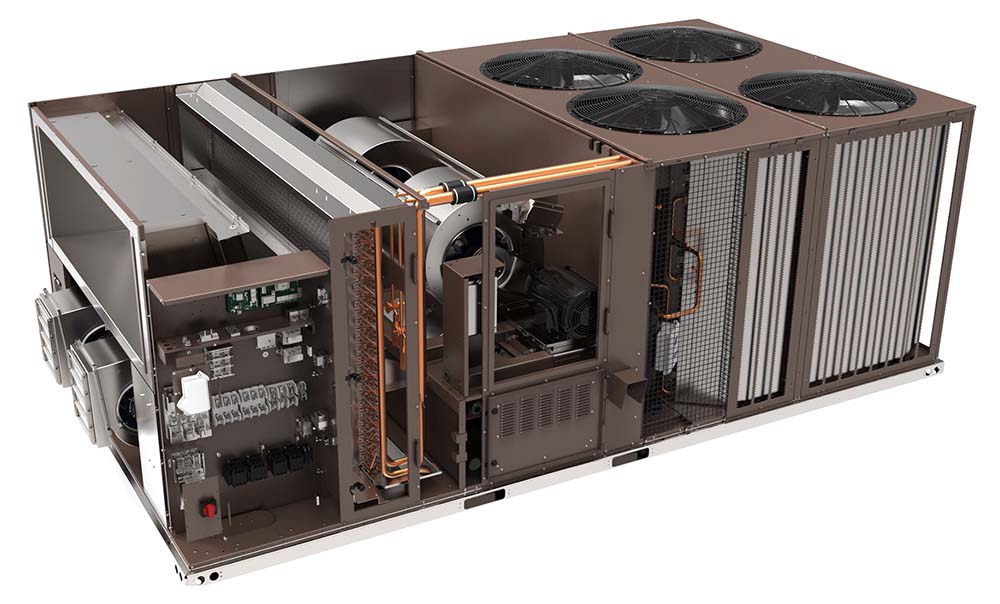 HARMFUL EMISSIONS: York’s Choice rooftop units can use electric heat instead of gas combustion, which can help to reduce harmful CO2 gas emissions. (Courtesy of York)

“For example, if you replace a gas-heating rooftop unit with an all-electric heat pump, this may pose a challenge due to the electrical characteristics increasing. The required wiring and breakers might be larger, which you have to account for when considering the infrastructure for the replacement.”

Another consideration with existing equipment is that older buildings with boiler-based hydronic heating systems are designed around higher hot water temperatures, usually around 180°F. While there are heat pumps that can deliver higher water temperatures, they are generally designed to deliver 120° to 140°F water, said Brian Dail, segment marketing manager of air conditioning at Danfoss. This can make existing piping and heat exchanger sizing a challenge that could require new radiators/fan coil units or at least a change in water flow pumping and balancing, he said.

“In addition, forced air heat pumps generally require more heating capacity than they do cooling, especially in northern climates where heating loads will be substantially larger than cooling loads in most applications,” he said. “The existing ductwork should usually be sufficient to handle vapor compression heating compared to a gas-fired furnace, but buildings may need to upgrade their electrical service for electrification of heating. That’s because the electrical power requirements for a building will jump substantially as the fossil fuel-based heating systems are switched to electric.”

Mark Lessans, senior director of sustainability and regulatory affairs at Johnson Controls, agrees that replacing traditional gas-fired boilers and water-cooled chillers with hydronic heat pumps presents a significant opportunity for decarbonization but can require additional design and engineering work, because the systems are more complex.

“Commercial heat pumps are truly remarkable machines in their ability to provide hot and cold water suitable for decarbonized space conditioning,” he said. “It is critical to have an understanding of how to balance your heat sink and heat source when you size a hydronic heat pump to avoid having water that is either too hot or too cold for the system, thus maximizing operational savings and limiting the use of backup equipment. [As noted above], buildings with older steam or hot water systems will often require water in the 180°F range to meet occupant heating demands. Some heat pumps can supply hot water temperatures close to that range, which can go a long way toward replacing the boiler.”

When replacing fossil fuel-fired heating equipment with electric alternatives, it is not as simple as, say, replacing a gas boiler with an electric resistance boiler. As Lessans noted, this type of like-for-like retrofit can result in higher operating costs, higher source emissions, and place a huge strain on the electric grid — sometimes referred to as “inefficient” electrification. Instead, heat pumps should be considered, as they can be over three times more efficient than electric boilers, thus delivering customers more benefits from electrification, he said. 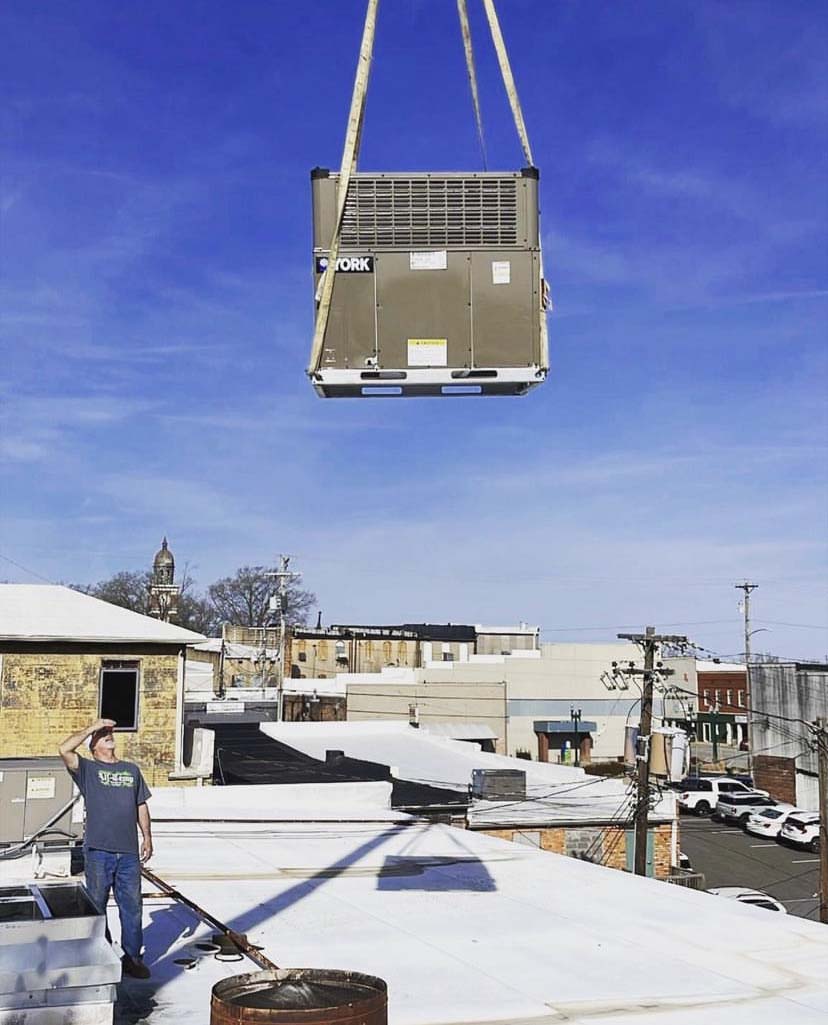 EQUIPMENT CHOICE: Equipment choice in retrofit applications is driven by what was installed previously, so that ductwork or hydronic distribution can continue to be used. (Courtesy of All Temp Heating & Cooling LLC)

Landes noted that in Europe on the chiller side, building owners commonly combine heat pumps with boilers. The chiller produces hot water almost all the time, but on the coldest days when the chiller can’t keep up, the gas-powered boiler kicks in.

“The building owner gets a substantial reduction in carbon footprint but also has a workaround for the Achilles’ heel of the heat pump in cold weather,” he said. “With legislation in the U.S. leaning more towards a ban on natural gas hookups, hybrid systems may not be as prevalent here, at least not with gas-fired boilers. Electric boilers would still be possible, though more expensive.”

Dail agrees that in many cases, fossil fuel-based heating equipment will be replaced by electric-powered heat pumps, either hydronic or forced air. He noted that hydronic heating is typically used in large buildings where a central heating and cooling plant is economical and is also common to more northern climates and older building construction.

“Forced air heat pump systems supply air conditioning in the summer and heating in the winter,” he said. “They can be used anywhere, but the efficiency is greatest in milder climates, where heat pumps can easily exceed a COP of 3, compared to even the most efficient gas furnace only having about a 98% efficiency. That is a massive gain in efficiency. However, when temperatures drop below freezing, air-to-air or air-to-water heat pumps will need to defrost their outdoor coils. At colder temperatures, the ability of heat pumps to maintain capacity also drops, and supplemental heat can kick in to ensure there is no loss in comfort. Colder climates adopting a hybrid gas/electric system could allow for a substantial reduction in emissions without bringing major changes to the electrical infrastructure and the costs associated with it.”

Speaking of cost, Landes noted that it will likely not be possible to purchase a heat pump system for less than the price of a gas boiler; however, the heat pump has efficiency and climate-impact-reduction advantages.

“The cost will come down to regional factors and how much heat you can source from the heat pump,” he said.

Electrification and decarbonization represent an opportunity for contractors to increase the value proposition they can make to their customers.
Mark Lessans
Senior director of sustainability and regulatory affairs
Johnson Controls

The good news about electrification is that it offers many opportunities for contractors. For example, in cold-weather states and cities moving in the direction of electrification, hybrid systems could definitely become more popular, particularly as a first step, said Landes.

“Hybrid system installation is work that has to be done by contractors, so overall, electrification will likely bring more work to the table for contractors,” he said.

“These same contractors should then understand the efficiency gains and incentives (both federal and local) for electrification that may be able offset many of these costs to their customers,” he said. “There will be more work than just replacing like-for-like, and electrification has the potential to bring in more work for the contractors who are able share the whole picture with their customers.”

Many customers are eager to electrify their space heating, especially if they have set commitments to decarbonize their operations, said Lessans. Reducing on-site fuel combustion is often a core part of that strategy.

“In fact, 35% of facility managers interviewed for the latest Johnson Controls Energy Efficiency Indicator Survey said they plan to install heat pump technology in the next 12 months, an increase of 7% over those who said they already had in the past 12 months,” he said.

The bottom line is that electrification and decarbonization represent an opportunity for contractors to increase the value proposition they can make to their customers, said Lessans. To prepare for this opportunity, he noted that it’s important for contractors to understand the local policies and/or decarbonization targets driving customers to pay closer attention to on-site fuel use. In addition, they need to be able to explain in layman’s terms the practical heat pump applications for their building type and the long-term benefits they can provide.

“Innovation in heat pump technology is unfolding rapidly, and heat pumps are able to address an increasing share of heating loads,” said Lessans. “As we continue the buildout of a smart, zero-carbon electricity system and buildings-to-grid infrastructure, I can envision a future where full electrification makes sense for all buildings.”

And that’s a tremendous opportunity for HVAC contractors.