Almost every HVAC contractor in the nation says hiring good technicians is the top priority. Not Robbins Heating and Air Conditioning in Farmington, New Mexico. The firm doesn’t have a problem hiring techs because it doesn’t hire techs.

Today, only four of Robbins’ 24 employees came from the HVAC business. Instead, the firm hires for value and character, then trains staff in the necessary technical skills. It’s not an easy process. Each job candidate goes through several interviews before getting an offer. Then there are three levels of classroom training along with in-field experience.

When the Robbins made the switch, co-owner Steve Robbins handled the training. Steve Robbins studied HVAC at a technical college after graduating from high school. He returned to his hometown and worked for an HVAC contractor for four years. In 2003, he and his wife Michelle struck out of their own. 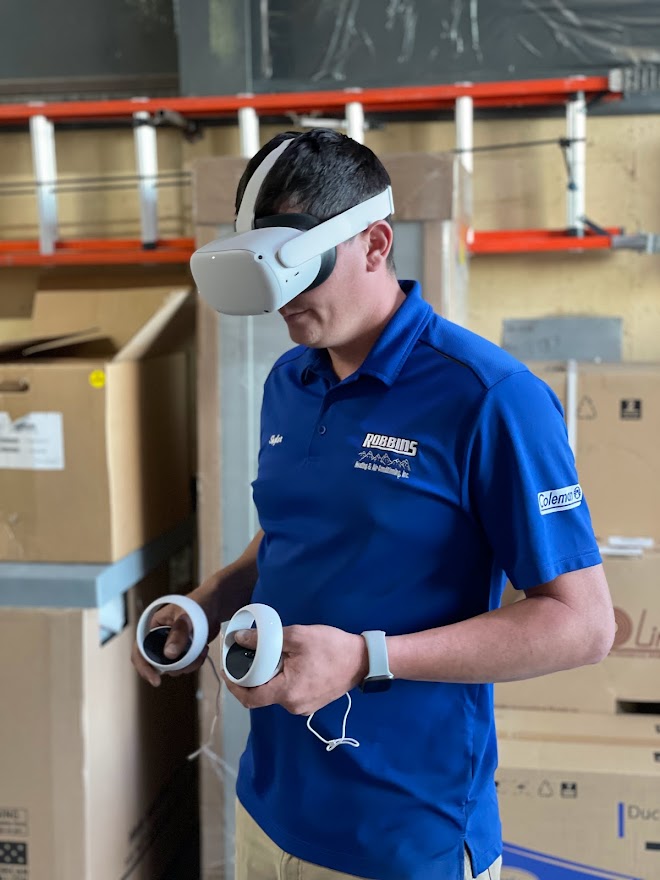 NEXT LEVEL: Install manager Heath uses a virtual reality set during a training session. Robbins hires for personality and then trains on technical skills. (Courtesy of Robbins Heating and Air Conditioning)

Today, the classes are taught by install manager Skyler Heath and service manager Drew Antonini. Antonini is a product of the training system himself. He joined Robbins seven years ago after working in the oil and gas business. He wanted a job that would allow him to spend more time with his family.

Some in the HVAC business might find such a switch an odd way to gain more life-work balance. But Robbins offers a plan that does just that. Techs work four 10-hour shifts each week and are on-call another day. No one at the firm works Sundays, so techs are always guaranteed two days off.

Robbins dispatchers work to schedule calls so that techs avoid driving more than 30 minutes. The goal is saving them 10 minutes a day, said lead dispatcher Brenda Spires. Techs also start or end their days near their homes. 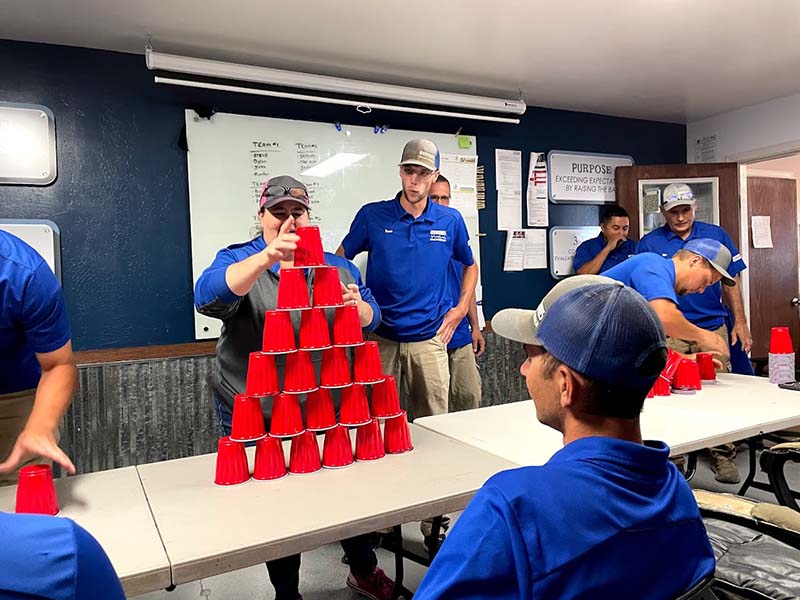 In 2003, the Robbins did pretty much everything themselves. Today, they depend on a management team that includes Heath, Antonini, Spires, and lead comfort advisor Richard Williams.

“That’s made a huge positive difference for us,” Michelle Robbins said.

Farmington enjoys all four seasons, but they tend to be mild. Before the pandemic, Michelle Robbins said, people often put up with cooling or heating issues during the fall and spring. When they started to spend all their time at home, they started to pay more attention to these discomforts.

“Now, it’s not an option,” Michelle Robbins said. “It’s miserable when they stay there all day.”

“I feel like we’re definitely the first phone call in our community.”
Michelle Robbins
Co-owner , Robbins Heating and Air Conditioning

Buying in Bulk to Avoid Shortages

Robbins promotes a range of IAQ products as well as duct cleaning. The firm offers techs spiffs for promoting IAQ products, as well as maintenance agreements, and often runs contests around these. Michelle Robbins said the firm also focuses a lot on mini splits. These work in well in the area because many of the homes lack either an attic or a crawl space.

Robbins technicians also do light commercial work. Antonini said they can work on equipment up to 20 tons. Most of what they do, however, is 15 tons and less.

Like most HVAC contractors, a lack of parts and equipment challenged Robbins this year. Michelle Robbins said she ordered furnaces in the spring and it took six months for them to arrive. She’s been buying in bulk to ensure they have needed inventory.

“We’re buying things by the truckload if necessary,” she said. “If you can find it, you have to get it.”

“I feel like we’re definitely the first phone call in our community,” she said.

The firm also promotes customer reviews. Robbins pair ReviewBuzz with its dispatch software. This sends texts and emails asking for reviews from each customer. Technicians also ask for reviews at the end of each call.

The business met expectations this year, Michelle Robbins said, but she expects a slowdown in the coming months. Consumers have made a lot of repairs and upgrades, and now inflation is making money tighter.

“Were definitely expecting a lull,” Michelle Robbins said. “The surge of people being home has run its course.”

The management team went off-site to a cabin in southwest Colorado in mid-November to develop a plan for next year. Michelle Robbins said they do this every year, although it’s not also as far as this trip. It gives them a chance to focus and think differently about the business.

No matter what the market ends up presenting next year, Michelle Robbins said the company will continue to focus on creating the best customer experience. That’s how Robbins Heating and Cooling differentiates itself.

“Anybody can make the air blow through the holes, but we like to make a difference in people’s day,” she said. “It’s a pleasant experience and it’s easy.”