HVAC technicians often joke online by putting up a picture of a senior citizen and labeling it as a 30-something tech. The truth behind the humor is that the kind of work HVAC technicians perform on a daily basis places tremendous strain on their bodies. One contractor has made a major investment in helping his staff avoid injuries and recover more quickly if they do get hurt.

Josh Savage and his wife, Sheree, own Hero Plumbing, Heating and Cooling in Minneapolis. The couple bought the firm from his father, who in turn had bought it in 1982. Hero’s history traces back to 1914. When the Savages took over, the firm had four employees and did about $1.8 million in business. Today, Hero staffs 150 employees and does a little over $40 million in business.

The firm moved into a new facility last year and the Savages dedicated 4,000 square feet to a new business, Peak Health Lab. Peak offers performance and recovery services to the general public while providing a perk for Hero employees. The services include cutting-edge therapies, such as cryotherapy, as well as an in-house chiropractor.

Peak has attracted some high-profile clients since it opened, including a couple of hockey coaches from the University of Minnesota and NFL cornerback Marcus Sherels. But Josh Savage is most proud of being able to offer this level of care to his employees.

“The whole intention behind it is to be able to take the same kind of modalities that would be available to professional athletes and Olympians and make them available to plumbers, HVAC technicians, electricians, and office staff,” he said.

Opening a fitness facility during the coronavirus pandemic proved challenging. Josh Savage said they closed it off to the public a few times and even getting staff inside was challenging. It’s been worth the effort, however, for several reasons, he said. One is that performance is a passion for the Savages. Josh Savage said both he and Sheree have personally seen the benefits and want to share those with others.

Then there is the staff. Josh Savage said Peak is a way to show Hero’s employees how much the owners care about them. Avoiding or recovering quickly from injuries keeps employees working, which means it keeps them earning. That’s one benefit, Josh Savage, but the bigger issue is their quality of life outside of work. An injury keeps them from playing softball or spending time with their kids.

“When your back hurts or your knees hurt or you’re having some other physical issue, you won’t be able to engage with them any more than you’re able to effectively put a water heater in,” Josh Savage said. “When you’re physically hurt, not only are you not able to work, you’re just not able to participate in life.”

Technician John Nelson knows that firsthand. Nelson remembers hearing about all the aches and pains of his coworkers in their 50s when he was in his 30s. Now that he’s that age, he feels the effect of years of clearing drains. 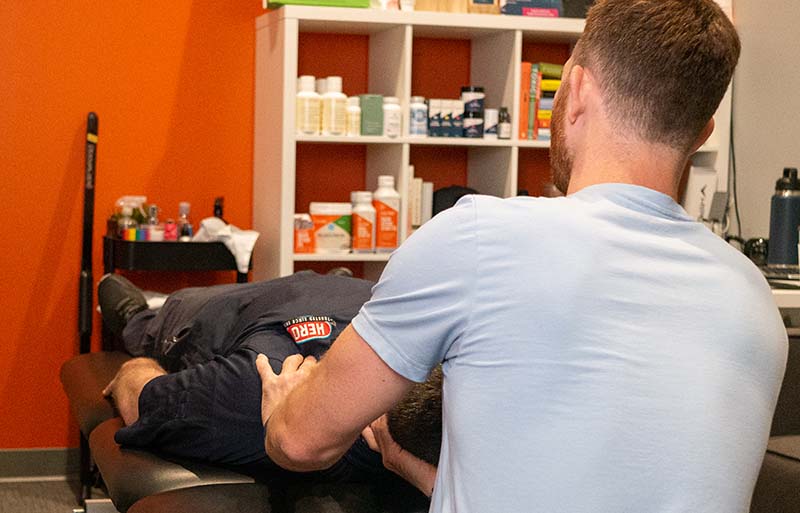 MAKING ADJUSTMENTS: Linstad gets a treatment from Andy Secour, the in-house chiropractor at Peak Health Lab. Treatment at the facility can cut recovery time in half. (Courtesy of Hero Plumbing, Heating and Cooling)

“A lot of what I’m doing is hauling a 250-pound machine up and down stairs all the days that I work,” Nelson said. “That does take a toll on my body.”

It was actually a fall in the parking lot last winter that finally brought him into the Peak Health Lab. Nelson was out of commission for two weeks following that, but he believes it would have been a lot longer without the treatment he received. Now, he’s a regular user. He does two sessions a week with the electric pulse machine.

Another reason for having the Peak Health Lab on-site: It works as a recruiting tool. Josh Savage makes it a stop on the tour for all job candidates. He said they often say they’ve never seen anything like that at any other firm. Nelson can believe that. He said friends are shocked when he tells them how his company offers his benefit to its employees.

“Josh is the kind of owner I’ve never come across before,” Nelson said.