Vehicles rank among the largest expenses for HVAC contractors, and right now they cost more to purchase, insure, fuel, and maintain than they have in recent years. HVAC contractors need to make an effort to contain these costs in any way, including how they shop for vehicles and how they use them on a daily basis.

Prices of both new and used vehicles have been going up due to a lack of supply. On the new side, factories face constraints due to shortages of materials, labor, and, most importantly, chips. Today’s vehicles are essentially computers on wheels. The auto industry is facing a crippling chip shortage due to the coronavirus pandemic.

Charles Chesbrough, senior economist for Cox Automotive, said auto manufacturers are focusing on their more profitable vehicles as a result. This means those bought by consumers rather than commercial clients. For example, Ford Motor Co. idled Transit van production at it Kansas City, Missouri, plant the week of March 22 to free up resources for other vehicles.

The lack of supply comes at a time of higher demand. New-vehicle sales started growing year-over-year in September. High demand and tight supply means higher prices. And that’s true for both new vehicles and used vehicles.

Although new-car sales have been stronger lately, they remain below the latest peak of 17.5 million, reached in 2016. That means a shrinking inventory of used vehicles and higher prices for those that are available. The General Motors strike in 2019 and the pandemic only made supply tighter. Now an influx of stimulus money and tax refunds will add even more demand, Chesbrough said, driving prices higher. 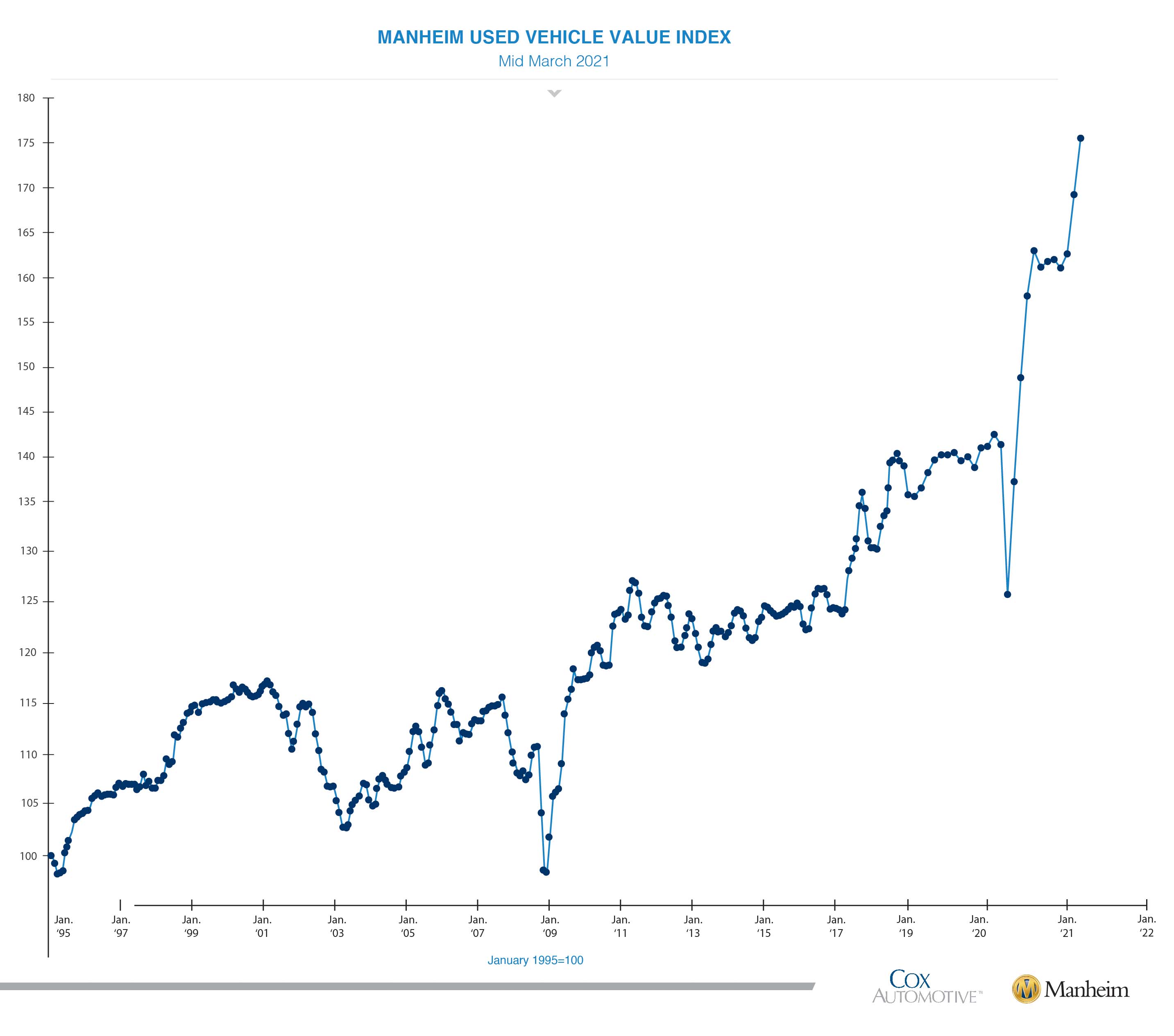 SHARP SPIKE: The Manheim Used Vehicle Value Index shot up to an all-time high in mid-March.

Widening the Search for Vehicles

Nick Lamb, principal and vice president of Butler Heating and Air Conditioning in Dayton, Ohio, recently purchased three used Transit vehicles. Lamb always buys used because he considers it a better deal, even with the discount he gets from being a Carrier dealer. The vehicles are often already fitted out for trade work. 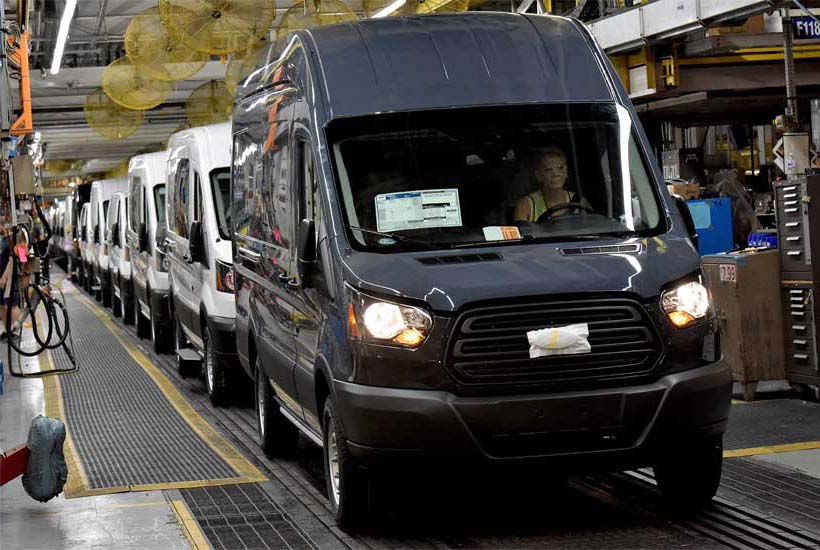 Lamb pays between $19,000 and $23,000 per vehicle. Wrapping the vehicles adds a few thousand more to the overall cost. This time, Lamb stayed in budget, but finding the Transits took a greater effort. None of the local dealers Butler usually works with could find the right vehicles at the right price. One even tried to source them from the wholesale market with no luck. Lamb finally found two Transits at one dealership and bought the third from another.

Butler owns a fleet of 25 vehicles. Most are Transits, along with some cargo vans and a couple of cars and a pick-up truck for sales. All are Fords. Lamb said the firm tried different vehicles but found Ford provided the most value. Other brands have a better reputation for reliability, but when something does go wrong, the repairs are more expensive.

It almost always costs more to replace a vehicle than to keep it running. That’s why more commercial vehicle owners are focusing on maintenance, said Terry Rivers, vice president of maintenance at Dickinson Fleet Services. The goal is keeping vehicles out of the garage.

“A lot of times, the wait costs more than the service does,” Rivers said.

The time keeps growing as auto repair faces the same challenge as HVAC — a lack of skilled technicians. A repair shop may have five bays but only staff for three of them. If the workforce challenge is the same, so is the solution HVAC contractors tell their clients — preventive maintenance.

New Strategies to Use Less Fuel

A trip to the mechanic is avoidable. A trip to the pump is not, and fuel prices are climbing. Gas prices exceeded $3 a gallon in many parts of the country at the end of March. Market observers expect prices to remain elevated through the summer.

This has HVAC contractors looking for creative solutions. Lamb started training his technicians and his dispatchers so he can deploy the techs in such a way as to reduce fuel usage.

“Instead of sending specific service techs to specific types of applications, we’re doing more cross training and lining up our service techs so they are more regional,” he said.

Steven Wells, founder of ClearPath GPS, said he knows of one contracting firm who changed its system for getting supplies. By analyzing data, management found it was cheaper to have one employee in a small pick-up truck do all of the runs and bring them to the job sites.

Wells’ company has seen an increase in demand for its products due to requirements from insurance providers. It was once a way to get a discount on a premium, he said, but now it’s often a requirement to get the insurance in the first place.

Auto insurance is rising for a number of reasons, but the biggest driver is jury awards. Wells said there have been several massive jury decisions against insurers in California, where he lives, that have increased prices everywhere.

Some HVAC contractors received a credit from their insurers last year because more drivers put fewer miles on their vehicles. However, that was a one-time occurrence. Higher prices are the norm, especially if one of an HVAC contractor’s drivers has an accident.

“You just cannot afford to have an insurance claim right now,” Wells said.

He sees more contractors installing dash cams in their vehicles to provide a defense in case of an accident. Wells know of multiple recent incidents in which drivers were exonerated by this evidence. This is crucial because attorneys seek businesses that can afford to pay in accident cases.

“These guys get blamed for everything when they have a big logo on their truck,” Wells said.

So vehicles today cost more to own and operate. The good news, Chesbrough said, is HVAC contractors get more for their money than ever before.

“These are the finest products that have ever been put out there,” he said. “Even though prices are higher, that doesn’t mean that the industry isn’t providing tremendous value.”