“Passive house” can rank pretty far up the list of inadvertently misleading phrases. Realizing the momentous energy-saving potential of this approach requires plenty of active effort on the part of designer, the builder and tradespeople, and even the eventual occupant. The strategy has also succeeded well beyond single-family dwellings.

How much energy savings, exactly?

Dynamic Air Corporation (DAC) is a manufacturer’s representative firm in Boston with experience in this area. DAC wrote a few years ago that “buildings designed and built to the PHIUS+ 2015 Passive Building Standard consumed 86 percent less energy for heating and 46 percent less energy for cooling (depending on climate zone and building type) when compared to a code-compliant building.”

PHIUS is not a misspelled jam band or earth-friendly automobile. The acronym stands for Passive House Institute US. The organization works to provide principles, modeling tools, other information, and community to architects and engineers working on passive house projects. Its standard has updated to PHIUS+ 2018.

PHIUS lists five “necessary criteria” for passive building design. They are worth contractors’ attention, since those principles inevitably have a deep impact throughout a project’s design, equipment selection, and installation. Quoting from the PHIUS website, the organization lists them as:

As DAC’s Carol Meader wrote in 2017, the continuous insulation’s intent is to eliminate thermal bridging. The window item and general airtight principle typically translates to triple-paned windows and high-performance doors.

The idea is to manage the resulting solar gain to provide comfort more efficiently in both heating and cooling seasons.

PHIUS sums up a difference between traditional and passive designs this way: While it’s “HVAC” in most settings, the reality in passive design environments is better expressed as “hVac.” The other components’ energy footprints are minimized as much as possible, and “balanced ventilation that delivers fresh air and removes stale air from the living space is a primary design focus.” 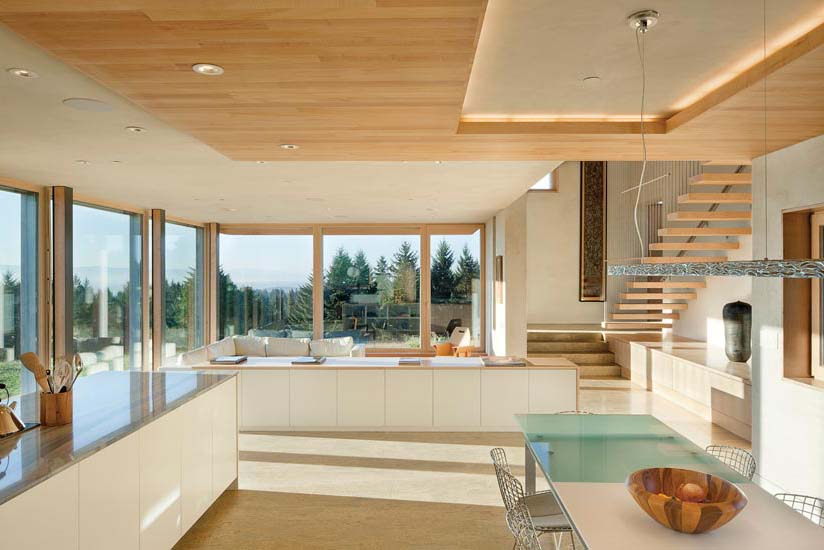 LIGHT AND THE LOAD: Triple-glazed windows change the heat load profiles for warmer and cooler seasons, raising the comfort stakes for a project team especially in kitchen and primary living spaces. Photo courtesy Passive House Institute US and Hammer & Hand.

Greg Davenport is a performance construction manager with Mitsubishi Electric Trane HVAC US (METUS) with significant experience with passive design.

“Cooling loads in passive homes can be relatively higher because of internal gains and improved envelopes in comparison to a standard build home,” he said.

While standard homes might have an airtightness of 4-6 ACH 50 in most regions of the U.S., Davenport said that passive home ACH 50 is .6 or less. That difference is where the high-performance ventilation priority comes into play, and the result is not the usual HVAC design.

Contrary to the common philosophy of adding fresh air into space conditioning ductwork, Davenport sees some manufacturers trying to add space conditioning to ventilation ductwork in homes with very low load. This, he said, requires careful duct design on a level that is unfamiliar to most HVAC contractors.

Cold climates may make radiant heat connected to air-to-water heat pumps an “incredibly energy efficient” approach. However, Davenport said, it can also be comparatively expensive and another strategy that many contractors would need to get more familiar with in practice.

DAC’s Meador explained that a passive house HVAC design will commonly “use some form of balanced heat- and moisture-recovery ventilation and a minimal space conditioning system.”

Energy recovery ventilators are another type of equipment more often incorporated in passive design. As an example, DAC represents a manufacturer called Swegon, which makes a unit with a track record in European passive projects.

Nearby Engineers in New York provides a range design and analysis services for clients. On its website, engineer Michael Tobias listed some passive design cons to accompany the documented pros. Two of the potential cons include that occupants need to learn how to operate controls (more than in a typical situation), and a backup system is often needed for shoulder season or supplemental performance.

That need for transitional help — and/or the fact that the radiant/heat pump system Davenport described for colder regions provides no cooling — has raised the profile of mini splits as a frequent starter in the passive design lineup.

Their appeal and geographical reach has grown thanks to performance improvements in low temperatures, but of course the core appeal is their ability to respond to needs common in shoulder seasons.

“However,” Davenport cautioned, “a mini-split system can also be oversized. Multi-zone mini-split systems are often grossly oversized for low load homes. HVAC contractors should look at using 1:1 systems in passive homes whenever possible.”

Multi-story residential or nonresidential passive designs have to avoid stack (or “chimney”) effect. The taller the building, the more of an obstacle it is to contend with.

Klingenberg described Plan B as semi-decentralized balanced-ventilation units placed on each floor. In addition to maintaining zone control, Klingenberg wrote that “centralized dehumidification can be installed from the VRF system after the air has passed through the ventilator,” a plus in more densely populated buildings.

One homeowner devoted a blog at http://passivehousepa.blogspot.com to the process and occupancy of what he described as the first single-family passive house in Pennsylvania. 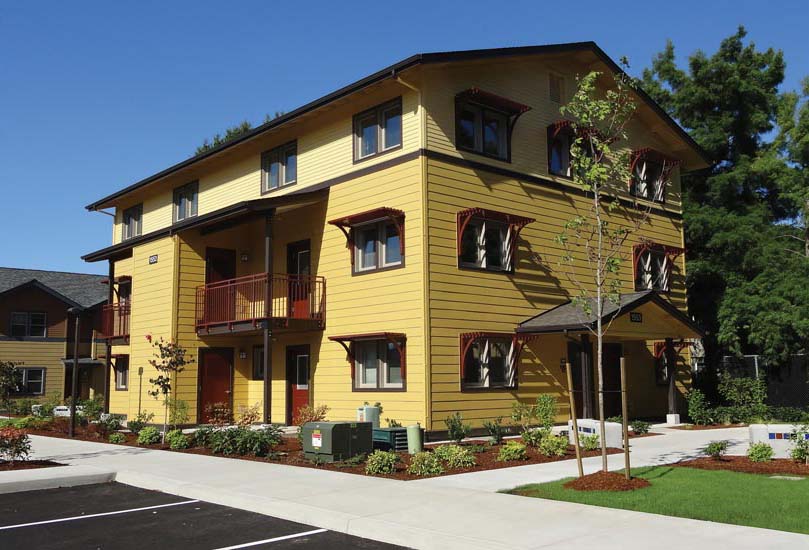 ODDS ARE ON 'EVENS': A 1:1 ventilation approach, where possible, can offer multistory buildings like this multifamily complex a stronger defense against stack effect. Photo courtesy Passive House Institute US and CPHC Win Swafford.

Even after consultation and design, he still found he had trouble spots back in 2013. His house was unusually large for passive design, but its challenges were due more to the multistory nature than its size. In his case, he eventually split up what had been a pair of minis splits in a family room, moving one to the basement. The overall equation of considerations definitely registered as more complicated than the typical HVAC challenge, but that move helped some. He still expected more tinkering would be needed, and he noticed that temperatures stayed more even when room doors remained open.

“This experience has taught me that strategic placement of your mini splits within the context of your mechanical ventilation configuration is as important as properly sizing your heating and cooling system,” he said.

Davenport’s team suggested a revision to a 1:1 approach with four smaller outdoor units and corresponding small multi-position air handlers inside the home.

That strategy delivered better shoulder season performance as well as true space heating/cooling independence. According to Davenport, the architect and general contractor gave the idea high marks, as it also did not increase the budget.

“It’s crucial for a high-performance HVAC contractor to be able to test for leakage, airflow, and air balancing,” said David Paschall, another METUS performance contracting manager.

In particular, Paschall mentioned the following a necessary for the successful passive house contractor’s toolbox:

Much as Rob Minnick emphasized collaboration for successful home performance contracting elsewhere in this issue, Paschall said that “having a strong network is equally important.”

He encouraged HVAC contractors to establish good working relationships with a project’s HERS rater and with PHIUS professionals. Paschall describes those sorts of connections as very valuable when navigating the “nuances and rigorous requirements of a passive house build.”

Many contractors are familiar with Manual J calculations, but Paschall had some bad news.

That is all the more reason, he said, for contractors to avoid adding their own padding. After all, “correct Manual J designs cover at least 99 percent of the year.”

Elsewhere in the Manual alphabet, Paschall advised getting familiar with the software and tools to do Manual S (equipment selection), Manual T (air movement), and Manual D (duct design) calculations, along with energy modeling programs such as EnergyPlus.

He compared Manual D’s calculation of pressure drop and resistance to plumbing or electrical design calculations to ensure delivery of the right amount of water or power to the point of use.

The constant goal: taking a systems-based approach at every step for high performance.

“Each of these are used in tandem to construct a more durable, high-performing climate control system to meet the passive home goals,” Paschall said.

Another piece of software specific to passive house design is WUFI®. This energy modeling tool — not to be confused with dedicated HVAC design software — is tailored specifically for projects in North America.

Depending on the specific project and the personnel involved, the contractor may be working with an outside designer’s system plans. Either way, HVAC contractors working on passive house projects can succeed by understanding the underlying objectives of the passive house philosophy and the tools to best ensure the desired results on site.

Passive house demands and projects’ particular locations may add up to a new set of mechanical challenges for contractors, too, like using the same deck of cards to play a different game with different rules. But the process can expand skill sets for even accomplished HVAC contractors, and the payoffs in terms of energy efficiency can also venture into new territory.