Federal legislation to create an orderly phasedown of HFC-based refrigerants has finally seen the light of day. After months of intensive work among industry stakeholders and government representatives, Sens. John Kennedy (R-Louisiana) and Tom Carper (D-Delaware) introduced Senate Bill 2754, The American Innovation and Manufacturing (AIM) Act of 2019, on November 1.

How much of a bipartisan unicorn is a federal HFC phasedown in the conventional political universe? Enough that S. 2754 enjoys full support from the National Resource Defense Council while coming to the Senate floor, thanks to Sen. Kennedy, a man whose League of Conservation Voters’ “environmental scorecard” rating looks more like a polling margin of error.

STEADY AS SHE GOES

The entire cooperative effort between the HVAC industry and Congress to get this far was necessitated by the Environmental Protection Agency’s opinion that it wasn’t authorized to regulate such things, contrary to previous conventional wisdom.

That disposition coincided with the arrival of the Trump administration, which has publicly neither discouraged that attitude nor given any assurance Trump would sign a bill like this one. In the simplest terms, stakeholders who worked on S. 2754 took pains to craft a bill that is marketable to Republican members of Congress on competitive business grounds and to Democrats from a climate responsibility perspective, all while staying limited and specific in the latitude it grants the EPA to address HFCs.

HARDI CEO Talbot Gee said earlier this year that he thought HFC legislation could become a reality in 2019, as long as all participants understood that they couldn’t get everything they want. The Senate’s version seems to have stayed true to many of the industry’s major preferences, most recently endorsed in a letter that 32 CEOs wrote and submitted to Congress.

Slater pointed out that the bill’s phasedown schedule is identical to that of the Kigali amendment to the Montreal Protocol. An ACCA statement noted that the U.S. is not party to the Kigali Treaty because both Presidents Obama and Trump have declined to submit it to the Senate for ratification. However, participants in the current effort agree on the benefits of aligning the U.S.’ schedule with that of Kigali signatories abroad. 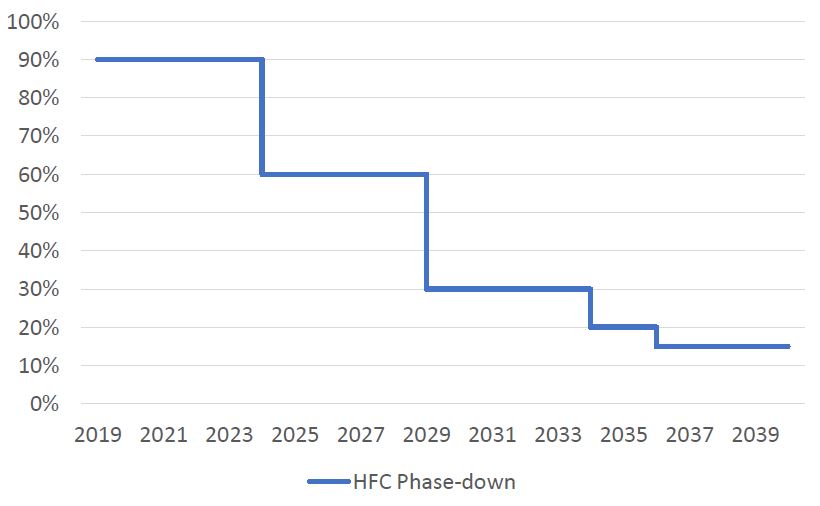 DOWN AND (GRADUALLY) OUT: The Senate bill’s HFC phasedown schedule would mirror the Kigali amendment’s timeline. Already widely adopted elsewhere, it includes two steep reductions over the next decade with a few years in between each dropoff. PHOTO COURTESY OF HARDI

Accordingly, the sponsors outlined that the bill opens the door for the EPA to administer the phasedown of HFC use over 17 years. The organized pivot toward a new generation of refrigerants is equally important. 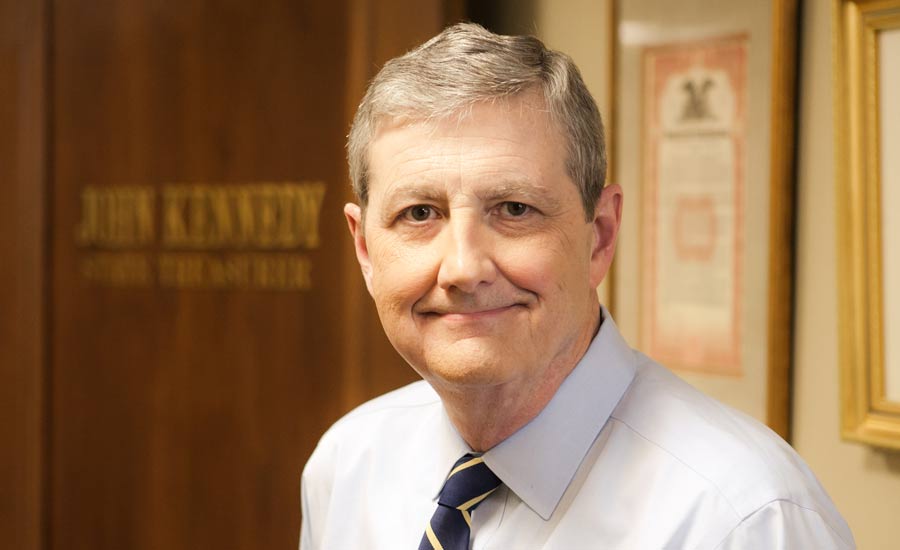 UNIQUELY BIPARTISAN: Republican Sen. John N. Kennedy of Louisiana introduced the bill along with Democratic colleague Sen. Thomas Carper of Delaware. Not only do they represent both sides of the aisle, but the 21 total co-sponsors bring equal support from both major parties. PHOTO COURTESY OF LOUISIANA DEPARTMENT OF THE TREASURY, CC-BY-2.0

“The world is moving away from HFCs, and the U.S. is in danger of getting stuck at the starting gate,” said Sen. Kennedy. “We want these new refrigerants to be produced in the U.S., not in China. We want to export these new refrigerants, not import them. That won’t happen unless we give companies in Louisiana and across the U.S. much-needed certainty to create thousands of new jobs.”

Specifically, the bill estimates 150,000 new jobs created directly and indirectly as a result of its contents, generating an estimated $38.8 billion in economic benefits by 2027 if enacted. Sponsors point to a recent industry study finding that the effects would include 33,000 new manufacturing jobs.

As for the NRDC, “The American Innovation and Manufacturing Act shows that industry, environmentalists, and lawmakers can work together to phase down harmful HFCs and help the United States maintain its leadership in replacing them with climate-friendlier alternatives,” said David Doniger, the Council’s senior strategic director.

“The world is moving away from HFCs, and the U.S. is in danger of getting stuck at the starting gate. We want these new refrigerants to be produced in the U.S., not in China. We want to export these new refrigerants, not import them. That won’t happen unless we give companies in Louisiana and across the U.S. much-needed certainty to create thousands of new jobs.”
— Sen. John Kennedy (R-Louisiana)
Co-sponsor of S. 2754

The bill’s “Sense of Congress” section takes a moment to specify that the EPA “should provide for a safe hydrofluorocarbon transition by ensuring that heating, ventilation, air conditioning, and refrigeration practitioners are positioned to comply with safe servicing, repair, disposal, or installation procedures.”

Further down, the bill “has some very strong language in it that would require the EPA to establish safety and training and certification programs that are recognized by the industry,” said Todd Washam, ACCA’s vice president, public policy and industry relations.

That, Washam explained, is to maximize the recovery of refrigerant along with ensuring safe handling by trained professionals. This goal echoes earlier AHRI assessments that refrigerant leaks and lost recovery opportunities are the primary (and often under-the-radar) culprits in today’s refrigerant environment.

ACCA supports not only the concept of certification for refrigerant handling but also keeping relevant skills fresh by requiring renewal of that certification.

“Our membership has said that renewing it every three to five years would be good for the industry,” Washam reported.

That level of specificity, he said, usually gets handled at the regulatory level. However, ACCA would like to see that type of language codified in the legislation itself, to remove another layer of possible interpretation differences or debate later.

With the understanding that the industry’s embrace of some A2L refrigerants has been more of a “when” and “how” issue rather than an “if” question for some time now, ACCA is also nearing the release of its own flammable refrigerant training program. The association has yet to announce details, but it will represent roughly three years of work and technical review for ACCA, which already enjoys ANSI approval as a standard development association.

This legislation is the result of industry-wide desire to avoid the oft-mentioned “patchwork of regulations” as individual states move in different ways to fill the void created by an apprehensive EPA. However, the Senate’s bill does not include federal preemption, a component that would have prohibited any state from going beyond the measures in the legislation. As such, S. 2754 does not technically rein in an aggressive plan like that of California and the California Air Resources Board.

In ACCA’s view, industry stakeholders believe that even states that have acted on their own might still adhere to this outline, should it become law. Some states’ legislation mirrors this bill in the critical areas anyway. Other states may discuss or pursue a more aggressive agenda, but even then, carrying out those programs represents a significant investment of resources. The belated introduction of a federal plan is expected to give those states pause about their own plans and slow the movement of any initiatives in other states.

Back in Washington, AHRI hopes to see a strong number of co-sponsors enlisted by the end of the year, according to Slater. They would join original sponsors Kennedy and Carper (who is the ranking Democrat on the Senate’s Environment and Public Works committee) and 19 subsequent co-sponsors split evenly along party lines.

Slater does expect a House version to develop and match S. 2457 on the most substantive elements, if not in every detail.

She also expressed optimism that Congress would be “eager to show they can legislate and do the work of the American people” during any impeachment proceedings that arrive in one chamber or another.

Finally, should the Senate and presumed House versions pass and reconcile as needed, the final legislation would proceed to a White House, where the administration has not tipped its hand on the matter.

The difference now would be the presence of a formal plan, an economy-based argument in its favor, and a coalition of rare diversity standing behind it. Then again, all of that has only been necessary because the administration and its EPA have taken a steadfastly hands-off approach to the topic.

“We hope the Administration would be open to a conversation about an industry-supported bipartisan legislative pathway,” Slater said.