This website requires certain cookies to work and uses other cookies to help you have the best experience. By visiting this website, certain cookies have already been set, which you may delete and block. By closing this message or continuing to use our site, you agree to the use of cookies. Visit our updated privacy and cookie policy to learn more.
Home » Uponor Aims to Save Time and Labor for Hydronics Contractors
HVAC Commercial MarketBoilers & Hydronics

Uponor Aims to Save Time and Labor for Hydronics Contractors

Making PEX to copper transitions without a flame

ATLANTA — Tools were whirring at the Uponor booth throughout the AHR Expo, as Daniel Worm kept busy demonstrating the company’s new transition fittings. Booth visitors looked on as he expanded a plastic pipe and, using the newly launched Uponor ProPEX LF Brass Copper Press Adapters and the M18 ProPEX Expansion Tool from Milwaukee Tools, created a PEX-to-copper transition — without the use of a flame.

“With these new transition fittings, it’s safer and easier than ever to incorporate PEX piping into existing copper systems with our flameless solution,” said Doug Fulton, senior director of segment, portfolio, and innovation marketing. “They also incorporate a patented design for securely fastening the pipe and fitting together, eliminating the need for a stainless steel ring.”

Worm, the one running the demo, walked his audience through the process.

“A lot of our customers are using copper press systems, for the larger diameter pipes especially,” he said. “Once you get into those 2½-inch and 3-inch sizes, pressing copper makes a lot more sense than sweating copper or brazing copper, like a lot of people used to do. Also, there’s a big push toward getting flames and hot work off of job sites, especially on wood frame buildings. We have a lot of customers who do re-pipe work on old, historical wood buildings — and obviously, wood and fire do not mix very well. This allows us to really round out our transition fitting offerings. We had copper sweat adapters previously. This allows that flameless transition, so they don’t have to have the hot work on there.” 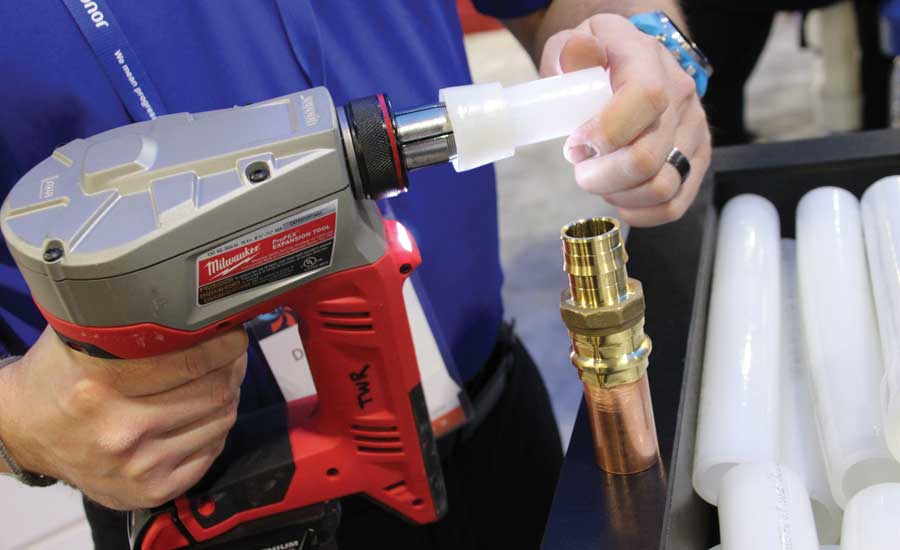 HEAT FREE: Using the Uponor ProPEX LF Brass Copper Press Adapters and the M18 ProPEX Expansion Tool from Milwaukee Tools, a PEX-to-copper transition can be created without the use of a flame, glues, or solvents.

With this application, it doesn’t really matter which connection is done first, because there are no torches involved.

“Once you have the press adapter side done, you can do the ProPEX side of it,” Worm said. “Here, you have PEX-A pipe with a ProPEX ring on the outside of the pipe. The ring goes on, and then we have the expansion tool that Milwaukee makes for us, and we’re actually expanding the pipe. The pipe has a shape memory to it, so it contracts back down.

“There’s no heat,” he added. “It’s purely mechanical. And you can pressure test these pretty soon after you’re done making the connection; no wait time.There’s no flames, no glues, no solvents, and we’re able to connect copper directly to Uponor PEX.”

Across the booth, a model radiant system demonstrated another Uponor piping innovation: Radiant Rollout Mats. Uponor does the legwork to lay out the prints and to label the plan and the product, and as the name implies, installers simply roll it out and hook it up. 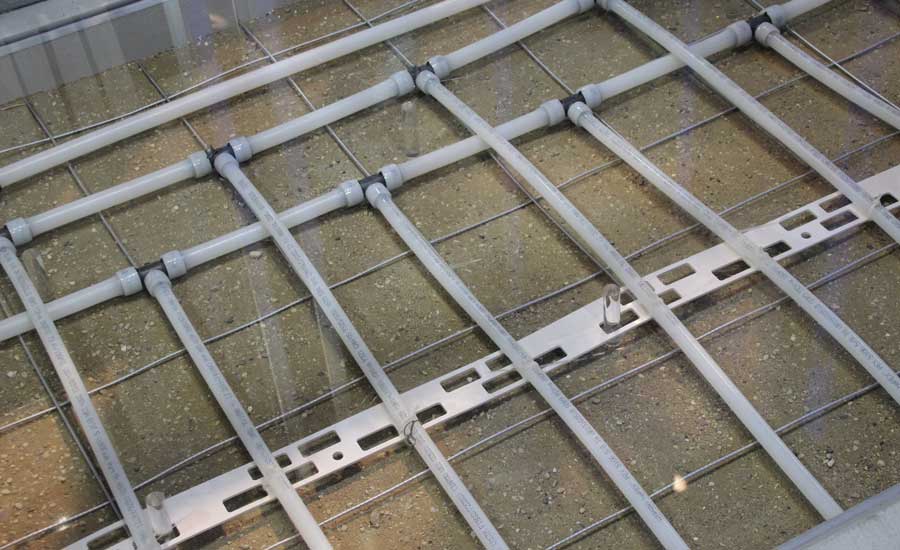 “Radiant Rollout Mats are a little bit different from the traditional way that we’ve installed radiant flooring,” said Kevin Hoffman, external corporate communications manager, Uponor North America. “It’s prefabricated at the factory, designed in reverse return, and it comes bubbled up per section, so it’s already bagged and tagged to be installed. So if the building’s really big, you have quadrants: a north, south, east, west sort of idea.”

Within the last year, Uponor completed a project with its rollout mats at Cleveland Clinic, reoprting work rates of eight times faster than a traditional radiant installation.

“Really, the only thing you can impact is productivity on a job site,” Hoffman said. “So anytime you can coordinate material to be on the job site at the right time, coordinate what the layout’s going to be, it’s a huge labor savings. And with the lack of skilled labor in the market, the more we’re able to pre-kit this stuff and have it figured out ahead of time, so they’re not having to assemble it on the job site or do hot work … that just makes it easier for the contractor at the end.”

Scarcity of resources, urbanization, an aging population, and new technologies are transforming the construction industry, Fulton said. So are new energy efficiency requirements, and radiant can help address those, Hoffman asserted.

A radiant system drops the boiler set points and brings the chiller demand down, Hoffman said, thanks to the supplemental cooling.

“[But] we still need air exchanges to handle relative humidity, so we’ll always need both systems,” he said.

Radiant can handle a building’s full heating load, but in most instances, it’s just for supplemental warming in the floors.

He gestured to the warehouse-sized showroom at the Georgia World Congress Center.

“In a big space like [the AHR showroom], the heat’s going straight up to the ceiling,” he said. “We’re lucky to be standing on a mat. But if that’s all exposed concrete on the floor, the colder it gets outside, the more we’re going to feel it inside, and that’s where we’re going to get uncomfortable: from the feet up. It’s a better footprint, not only for the human but for the environment, because we’re able to save energy by reducing the set points of boilers.”