This website requires certain cookies to work and uses other cookies to help you have the best experience. By visiting this website, certain cookies have already been set, which you may delete and block. By closing this message or continuing to use our site, you agree to the use of cookies. Visit our updated privacy and cookie policy to learn more.
Home » Executive Order Aims to Lower Health Care Costs
HVAC Residential MarketHVAC Light Commercial MarketHVAC Commercial MarketRefrigerationStandards & Legislation

Last October, President Trump surprised many when he announced he would sign an executive order allowing trade associations to sponsor health care coverage that could be sold across state lines. The reason for this decision, noted Trump, is to increase competition and choice as well as improve access to lower-priced, high-quality health care options.

“Large employers can often obtain better terms on health insurance for their employees than small employers because of their larger pools of insurable individuals across which they can spread risk and administrative costs,” said Trump in a news release. “Expanding access to association health plans (AHPs) can help small businesses overcome this competitive disadvantage by allowing them to group together to self-insure or purchase large group health insurance.”

While there are still many obstacles to overcome before AHPs become a reality, many in the industry think it’s a good idea. However, some are skeptical about whether it would really help reduce the increasingly expensive cost of health insurance.

“If this moves forward, it will definitely be a good thing for the industry,” said Todd Washam, director of industry relations, ACCA. “I think this would be a fantastic benefit for ACCA members because it would create a nationwide pool of businesses that we could use to negotiate better health care plans, similar to what the federal government does. They have such good health care because they have such a massive pool of people to negotiate with.”

Most ACCA members currently offer health insurance to their employees, but it is often the biggest burden for their businesses, noted Washam.

“Some of our members say their premium increases are in the double digits for 2018,” he said. “We haven’t yet done a nationwide survey of our members, but all of the contractors I’ve spoken to want to see this move forward, so ACCA can offer a health insurance plan.”

Of course, the gears in Washington, District of Columbia, grind slowly, and this executive order is just the first step in what is going to be a long regulatory process. While being able to offer health insurance is exciting to many associations, Washam is particularly happy about the rest of the order, which directs agencies to clarify rules to make it easier to reimburse employees for health care.

“That’s a big win for us and other associations that represent small businesses, because Obamacare penalized small businesses that reimbursed employees through health care exchanges or accounts,” said Washam. “ACCA fought that for years, and, finally, in 2016, we got it passed through Congress, and President Obama actually signed legislation to overturn that part of Obamacare. The Trump executive order directs agencies to work on expanding those arrangements and clarify any confusion that is prohibiting them from being used more widely.”

Associated Builders and Contractors Inc. (ABC) is also pleased with the executive order, noting it is a critical first step toward providing more affordable health care options and flexibility to small employers and their employees throughout the country.

“We are optimistic that it would be very beneficial for contractors, especially subcontractors with fewer than 50 employees,” said Sam Melamed, CEO, ABC Insurance Trust. “Currently, small subcontractors are penalized by Obamacare, because insurers that offer health plans are not allowed to take employee gender and employer SIC [standard industrial classification] codes into account, and they can only have a limited look at employee ages, all of which hurts male-dominated blue collar employers.”

More than 90 percent of ABC members offer health insurance to their employees, but they are generally frustrated with the few options they have, said Melamed.

“If we can aggregate small employers into one ABC pool and help them be treated fairly based on their underlying risk, we are confident that many of our members would love the opportunity to participate in an AHP.”

“But we are looking closely at the opportunities that might arise after the Department of Labor [DOL] determines the feasibility of AHPs,” said Melamed. “The executive order was a very positive first step, but it merely directed the Secretary of Labor to examine the issue and try to find ways to make these plans feasible. There is much to the process that still has to play out.”

Liz Patrick, vice president of strategic alliances, Service Nation Inc., agreed, noting with any group decision or purchase, there are going to be difficulties in implementing a program, especially one in which volume is a concern for reaching scale in terms of cost effectiveness.

“But using the buying power of our association to lower costs of health insurance would be beneficial to our members and fits with our mission of helping contractors grow profitably and develop a successful exit strategy,” she said.

It is something Service Nation intends to explore further.

“Every business owner would like to offer health insurance to their employees and families; it is a benefit that helps keep quality employees,” Patrick continued. “Orchestrating a group buy-in with a membership base our size would be interesting.”

Most contractors seem to like the idea of AHPs, but they are skeptical about whether they would actually work well in practice. Jaime DiDomenico, president and owner of CoolToday/PlumbingToday/EnergyToday, Sarasota, Florida, and chairman of Nexstar Network, is one of those contractors. According to him, the idea is great, but the environment and application would be difficult and likely yield poor results. 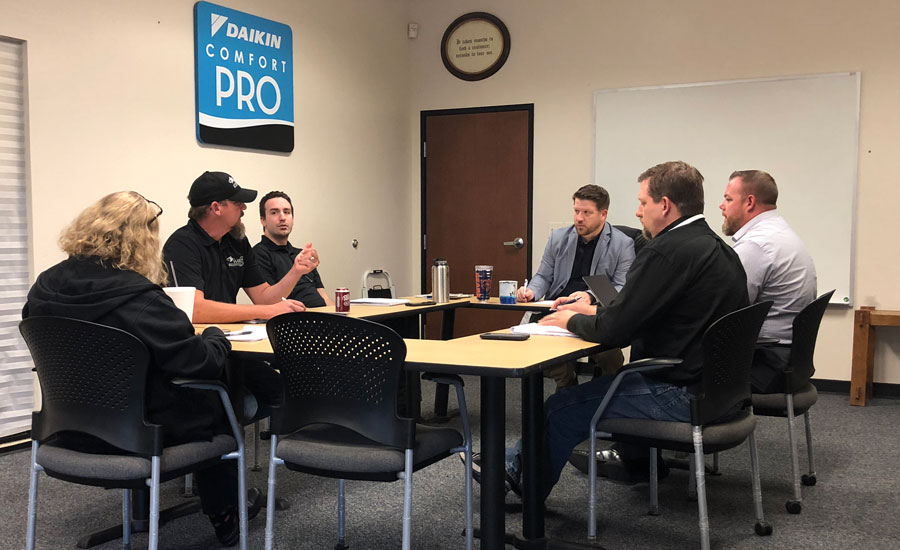 DIFFICULT DECISIONS:Paul Kuiper (in jacket at head of table) offers employees at Wolff Mechanical health, dental, and vision insurance but noted it is increasingly difficult to find the right plan.

“Until they remove interstate legislation on health care providers and streamline regulation at the state level, getting national coverage for independent small groups will be a challenge,” DiDomenico said. “I think any attempt to band larger groups together is a great idea, but insurance companies — and frankly, there are seven that control 85 percent of the markets — will not stand for lower rates when they could keep it smaller and leverage the independents.”

DiDomenico has always provided health insurance for his 220 employees, and after 60 days on the job, they have a choice of a PPO, an HMO, or an HSA. He is generally unhappy with how the health insurance process works, though, noting that even if claims are kept to a minimum, insurers continue to raise rates.

“Our average increase has been 12 percent annually, and premiums will increase at least that much in 2018,” he said. “We have to shop around every year to avoid a 25-percent-plus increase (regardless of claims), and I feel like the plans get watered down every year, which is why we now offer an HSA plan.”

The 350 employees at Isaac Heating & Air Conditioning, Rochester, New York, can choose from two high-deductible health insurance plans, as well as participate in an HSA to help with out-of-pocket costs. Employees pay a $1,500 deductible for a single plan or $3,000 for a family plan. The company pays the majority of the single plan premium and about 70 percent of the family plan premium.

“Every year, we do an employee satisfaction survey, and health insurance is traditionally the lowest scored area,” said Eric Knaak, vice president and general manager of Isaac Heating. “The cost of insurance has been skyrocketing for more than a decade, and everyone has issues with the cost. We are more or less self-insured, so our cost increases have been in the 7- to 8-percent range each of the past three years, with this year being around 3 percent.”

Even though costs keep rising, Knaak is uncertain whether AHPs would actually help slow the increases. “There is a risk when it comes to being part of a group because although the expenses are shared, the exposure for catastrophic occurrences increases. However, for the smaller company buying on the open market, being part of a larger group could have benefits, especially if administrative costs are shared.”

Dan Weis, vice president and co-owner of Weis Comfort Systems, Fenton, Missouri, is also unsure whether AHPs would be beneficial.

“If you have a healthy group, affordable coverage is usually available,” he said. “However, if associations could find a way to offer competitive rates and break down the barriers for shopping for insurance across state lines, that could yield a more positive result for contractors and other small business.”

Still, Weis is happy with the current health insurance options, noting the average cost increase over the last three years has been about 8 percent. One of the reasons for the single-digit increases is that the company decided to partner with the payroll company, ADP, as a co-employer.

“The healthcare savings, the favorable rates for worker’s comp, and the HR [human resources] benefits allowed us to offer our current insurance plan at considerable savings — even with their administrative fees,” Weis explained.

Shopping for affordable health insurance coverage has become an annual event at Wolff Mechanical, Phoenix. The company offers health, dental, and vision plans to its 85 employees, covering 50 percent of the single coverage premium.

“We shop every year, and it’s becoming much more difficult to find the right plan,” said Paul Kuiper, general manager at Wolff, who is not particularly happy with the quality or cost of his health insurance options. “With the cost, support should be much better, but it is not even adequate or average. Our health insurance makes every procedure very difficult outside of normal doctor’s visits, and even then there have been many snags in approvals for prescriptions and other normal events. Costs continue to increase and will again in 2018.”

Kuiper likes the concept of AHPs and would consider them for both Wolff Mechanical, as well as Simply the Best, another company he operates.

“I would like to help us, as the employer, as well as our employees, find a financial win without losing quality,” he said.

Brian Schutt, owner of Homesense Heating and Cooling, Indianapolis, does not currently offer health insurance to his 16 employees but is hopeful that AHPs will help him provide that benefit in the future.

“It seems that creating larger buying pools among associations could be a great idea to increase the number of contractors that would be able to offer health insurance,” he said.

Offering health insurance is also becoming a more significant recruiting tool, said Schutt. “Ultimately, it’s our goal to offer health care plans to our employees,” he said. “As the macro workforce challenges mount in HVAC, we will have to continue to grow our benefits package to attract the best and brightest to our industry.”