The Professor: Symptoms of Air in a Refrigeration System 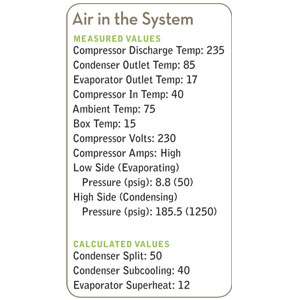 If air gets into a system, it will collect in the top of the condenser and be trapped. Air is a non-condensable and cannot be condensed like refrigerant vapors. The liquid seal (subcooled liquid) at the bottom of the condenser will prevent air from leaving the condenser. Air will cause a reduction of condensing surface area and cause high condensing (head) pressures.

The symptoms of air in a refrigeration system are:

Let’s take a closer look at each of these.

High Compression Ratios — The higher condensing (head) pressures will cause the compression ratio to increase, causing low volumetric efficiencies and loss
of capacity.

Normal to Slightly Higher Evaporator (Suction) Pressures — A system’s thermostatic expansion valve (TXV) will control superheat as long as the pressure ranges of the valve are not exceeded. It takes a very high head pressure to exceed the pressure range of most TXVs. The TXV may overfeed a bit on its opening strokes because of the greater pressure difference across its orifice, giving it a slightly higher capacity. This may give the evaporator a suction pressure that’s a bit higher than normal.

If the amount of air in the condenser is extreme, the compression ratio will skyrocket and cause very low volumetric efficiencies. This will cause a low capacity, and the box temperature may rise. This added heat in the box may cause evaporator pressure to increase because of the added heat load.

Normal Superheats — As mentioned earlier, the TXV will try to maintain evaporator superheat as long as the valve’s pressure range is not exceeded. The opening strokes of TXV may momentarily overfeed the evaporator, but it will start to gain control shortly afterwards.

High Amp Draws — The high compression ratio will cause a greater pressure range for the suction vapors to be compressed. This will require more work from the compressor and increase the amp draw.