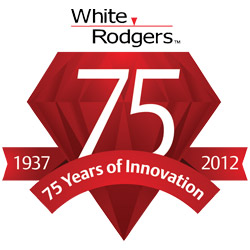 ST. LOUIS — In 1936, a small group of engineers from Emerson Electric developed a new hydraulic action temperature-control device for use in thermostats, stacks, and other heating ventilation applications. This group formed Missouri Automatic Controls in 1937 and soon became White-Rodgers Electric Co., named after principal engineers Jim Rodgers and Chesterfield White.

Now, in 2012, the company is proudly celebrating its 75th anniversary.

“So much has changed in the HVACR industry over the past 75 years. The changes in controls and equipment have been dramatic,” said Craig Johnson, White-Rodgers president. “White-Rodgers engineers have always been at the forefront of technology, designing and producing the most easy-to-use and energy-efficient controls of their time.”

“White-Rodgers is a proud controls supplier to OEM manufacturers and applies that expertise to universal replacement controls sold to the aftermarket,” said Johnson. “We want to thank everyone associated with the HVACR industry for their continued support and confidence through our first 75 years. Going forward we will strive to maintain that trust as we enter these new and exciting times.” For more information, visit www.emersonclimate.com.