Over 400 members attended the 19th annual event earlier this month

Red carpets, dancing, education, networking: these are just a few of the things attendees of this year’s Women in HVACR (WHVACR) 19th Annual Conference got to experience early November in Phoenix, Arizona at the Arizona Grand Resort. The conference was their largest event to date, breaking attendance records with 405 attendees and 45 exhibiting sponsors. In addition, WHVACR also celebrated its 20th anniversary as an organization. 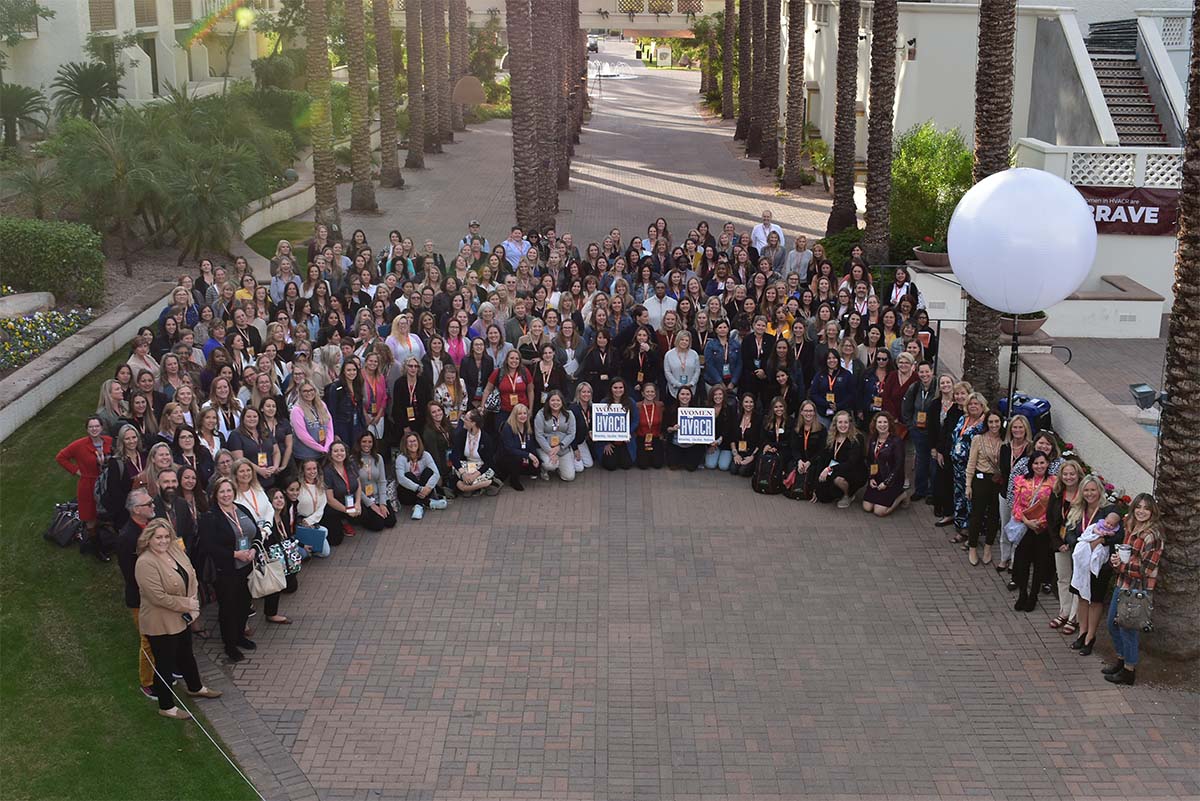 ALL TOGETHER: Attendees of WHVACR gather outside for a group photo. (Courtesy of Lance Lackey and Pixster, click to enlarge.)

“One of the most surprising and exciting things … was the complete shift in age demographic in the majority of the attendees. Not only did they see the return of their long-time members in attendance, but there was an entire new group of women under 30," said Colleen Keyworth, president of WHVACR and sales and marketing director for Online Access Inc. 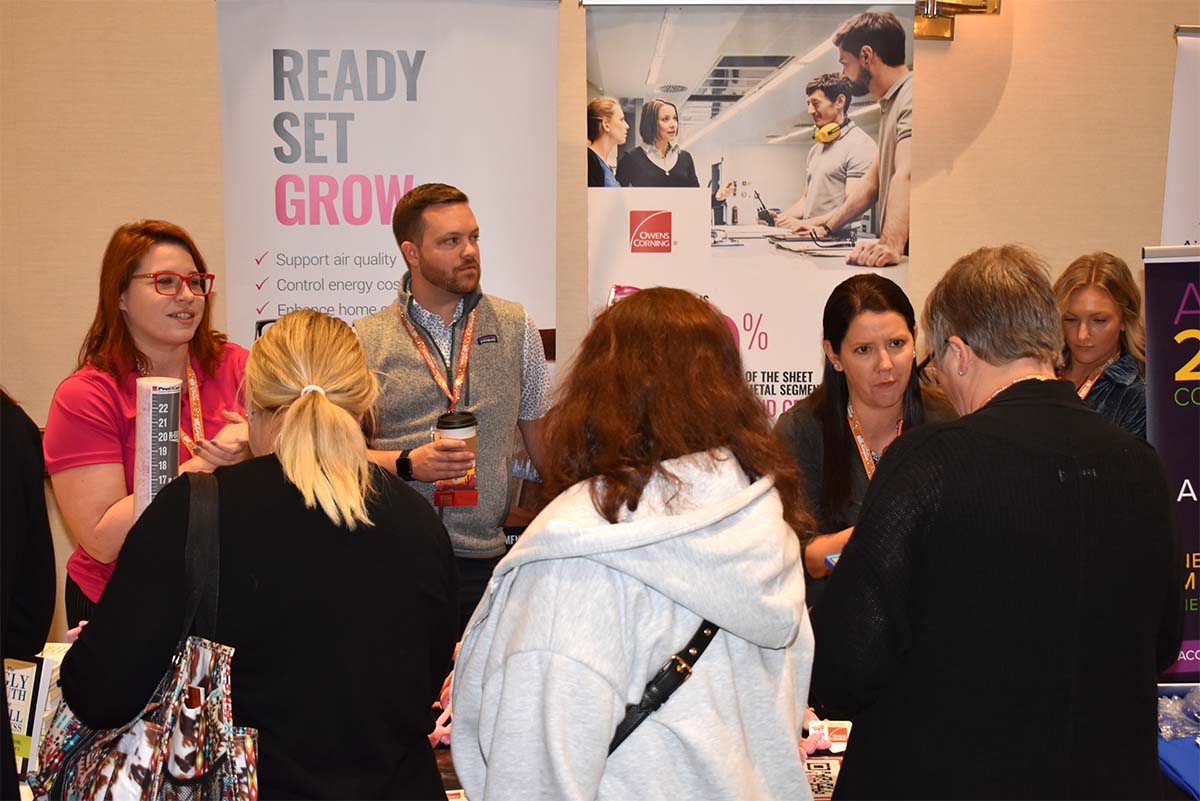 Ryan kicked off the first full day of the event by discussing with the attendees gratitude strategies to boost their business and their life. She shared three gratitude practices, one of which was “the ABCs of gratitude.” The exercise intends to calm those voices many people hear before going to sleep. She encouraged attendees to start with a letter of the alphabet and go down the line listing things they are grateful for that begins with each letter.

“You’re going to give those voices something to do,” Ryan said.

Ryan also shared that for every five minutes someone spends in anger, the effectiveness of their immune system is reduced for up to six hours.

“Those people who you are letting live-rent free in your head are killing you,” Ryan said.

During the conference, attendees had the opportunity to attend a myriad of roundtable sessions covering topics such as networking, business hacks, conflict resolution, contractor training, regulatory changes, sales and marketing, communications, and more. During these sessions, communication and both problem-sharing and -solving was encouraged.

In the “Machiavelli For Women” keynote, Vanek Smith discussed the most successful tools and techniques that women can implement to move up in the workplace, negotiate pay and benefits, mentor others, and stand out, sharing advice such as to take action.

“Insecure people waffle. Confident people act. They’re less worried about failing and less scared to try something new. So push yourself to act … [Things] like speaking up in a meeting, or asking for a raise or promotion, or pitch an idea you have … take some kind of action,” Vanek Smith said.

During this year's conference, WHVACR also started a new form of partnerships with industry podcasters. 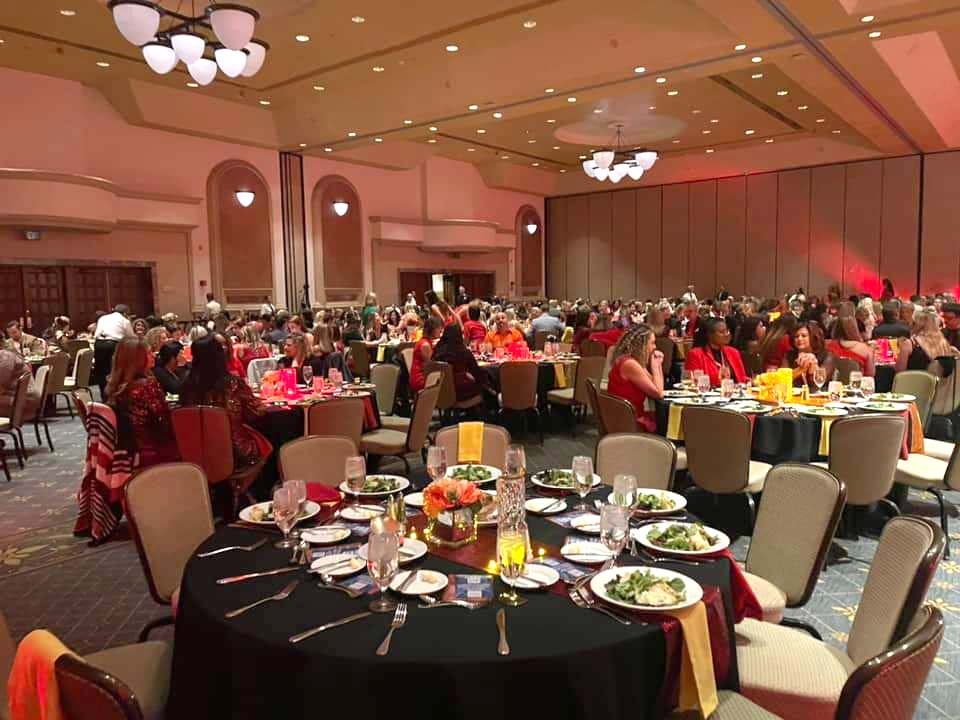 To celebrate its 20th anniversary, WHVACR held its Ignite Gala during the last night of the conference. The theme this year was fire and attendees were dressed to the nines in the colors of flames as they walked the red carpet and took their seats. At the Gala, WHVACR recognized its 2022 scholarship winners: Nicole Boyette, Nicole Brown, Syreeta Greer, Glenda Lane, Becki Maitland, and Rebecca Thorstad. 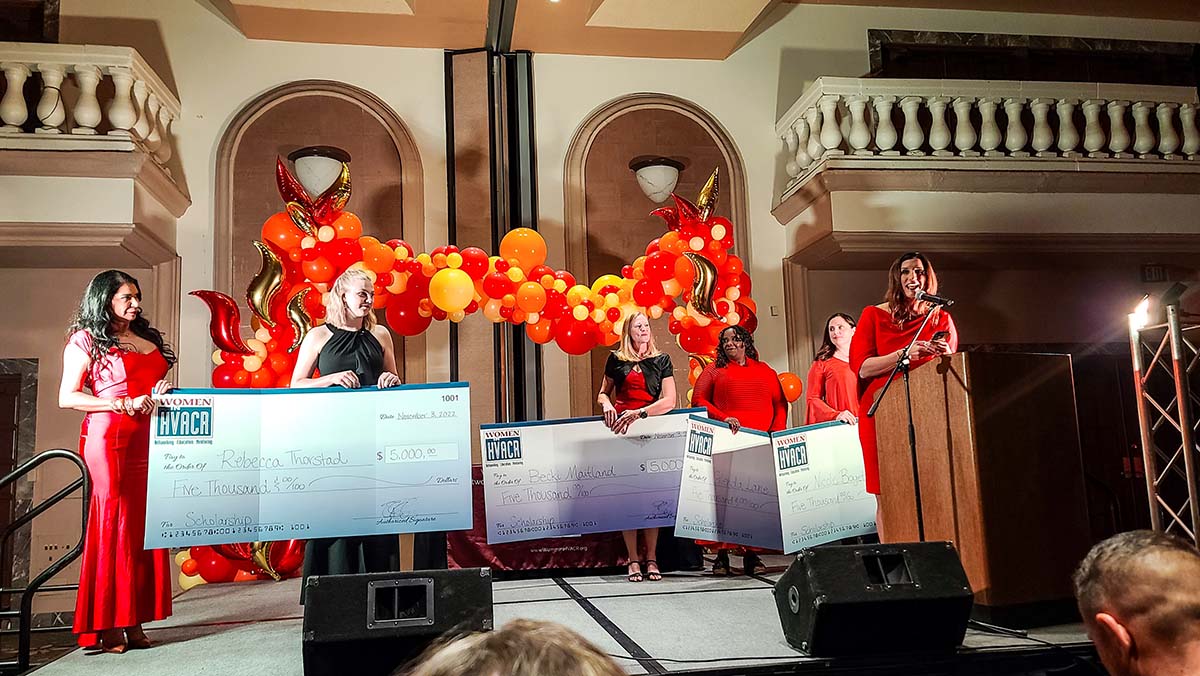 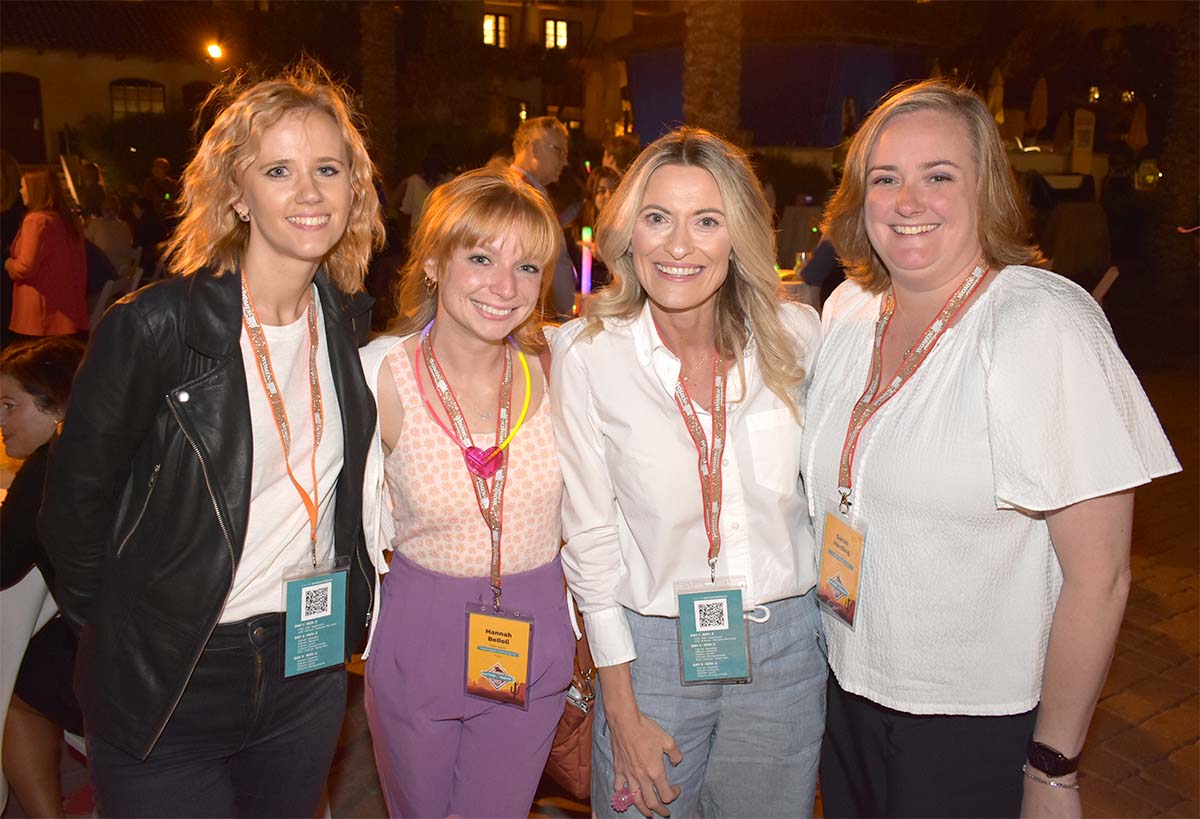 THE NEWS: From left to right: The NEWS’ Maria Taylor, Hannah Belloli, Carrie Halbrook, and Sarah Harding at WHVACR’s glow in the dark pool party. (Courtesy of Lance Lackey, Pixster, and Colleen Keyworth)

Also recognized during the Gala was Service Nation’s Women of the Year, Lori Tschohl, and WHVACR founder Ruth King. King was recognized as, “the spark that ignited the blaze of Women in HVACR” and was presented with a crystal flame award “for her visionary guidance and exceptional leadership over the last two decades,” Keyworth said. 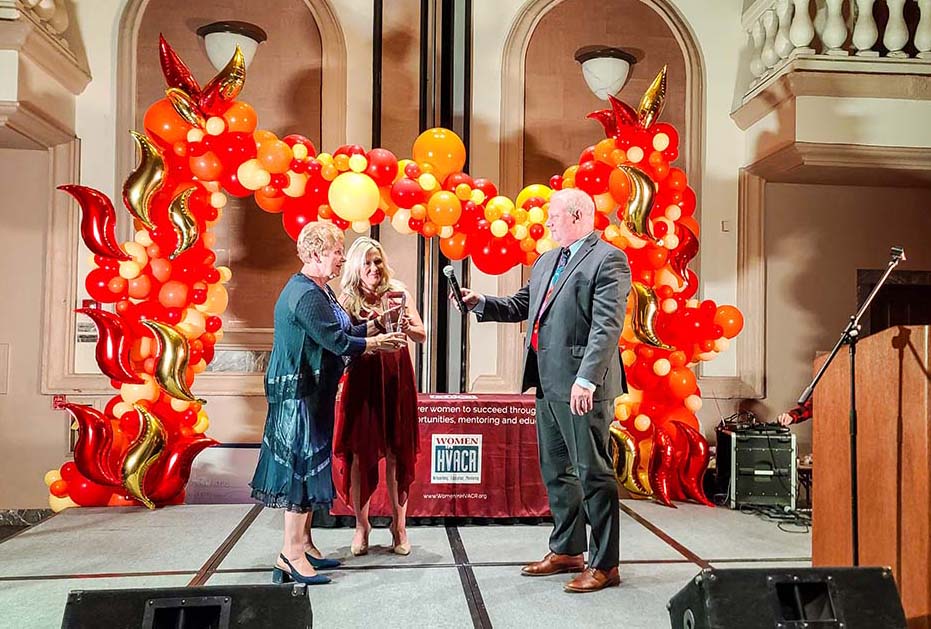 A. WOMAN OF YEAR: Lori Tschohl is recognized as Service Nation’s Women of the Year. (Courtesy of Lance Lackey and Pixster

B. THE SPARK: Keyworth and Ruth King, the “spark that ignited the blaze of WHVACR.” (Courtesy of Lance Lackey and Pixster) 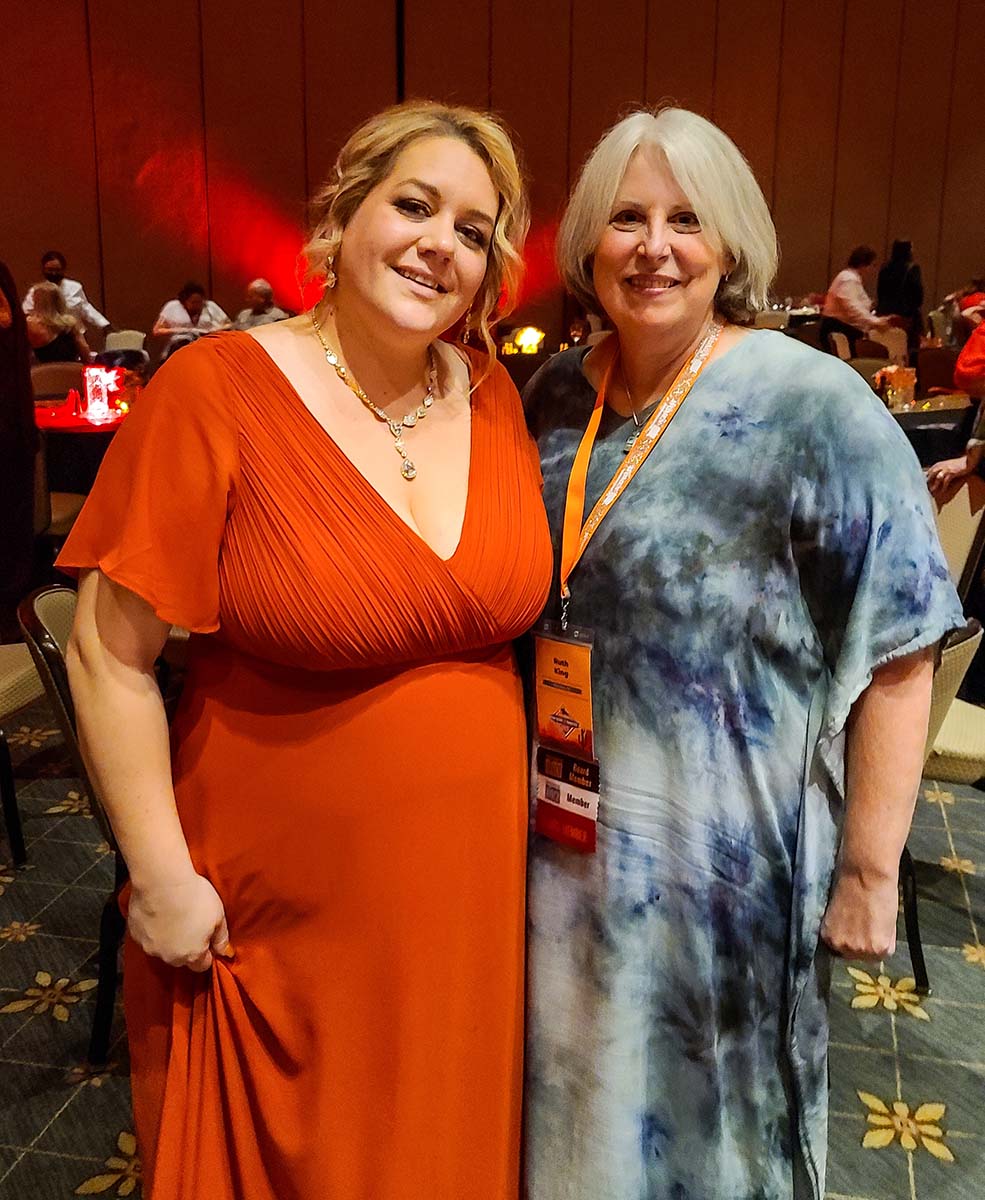 Stephen Gill, from WHVACR’s partner organization The International Network of Women in Cooling (INWIC), took center stage at the Gala to remind attendees of all WHVACR has accomplished since their fruition. What started with just a few members has now grown to 900. And through WHVACR’s new Endowment Fund Initiative, they intend to continue to continue growing while also building their scholarship fund to award bigger scholarships to more and more deserving women each year. 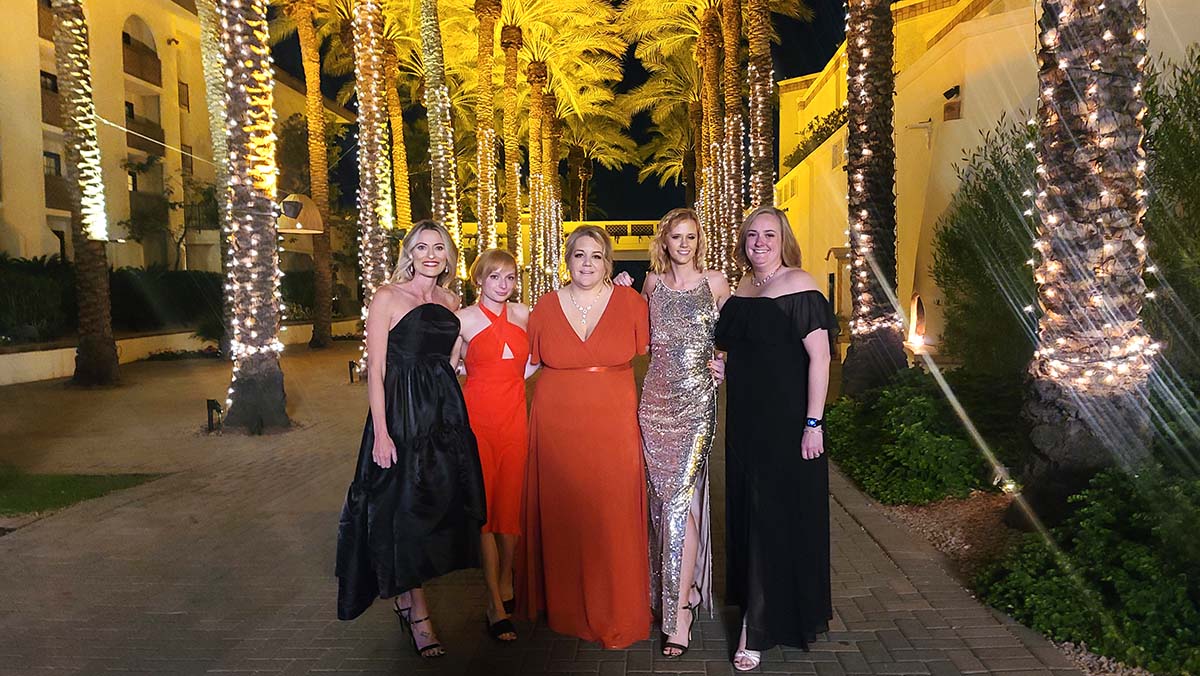 WOMEN IN HVAC: The ACHR NEWS team gathers with Keyworth at the end of the Gala. (Courtesy of Lance Lackey and Pixster)

KEYWORDS: Awards in HVACR Conferences in HVACR Events in the HVACR Industry Women in HVACR