For Federal Contractors, Vax Requirement Extends Through a Company and Beyond

MCAA webinar covers potential logistical impacts, what to ask for before signing a modification

The Biden administration’s proposed COVID vaccine requirement for businesses with over 100 employees is drawing most of the headlines as the judicial system determines its fate. However, companies doing work for the federal government face a separate requirement, courtesy of the White House’s Executive Order (EO) 14042.

For these contractors, the terms are stricter, the workforce impact can be surprisingly broad, and a Jan. 4 vaccination deadline for qualifying employees is not far off.

Easier to Ask Everyone

The testing opt-out alternative is perhaps the most immediately notable difference between the private-sector OSHA standard and the terms of EO 14042. For federal contractors, qualifying employees do not have the option of weekly testing.

Management for federal contractors must check employee vaccination records for qualifying employees and must designate an individual to coordinate vaccine implementation.

Contractors must also comply with CDC masking and social distancing requirements as well as with federal worksite restrictions.

The Mechanical Contractors Association of America (MCAA) hosted a webinar in November to discuss the order and its impacts on federal contractors. Lori Ann Lange and Lauren Rayner Davis, two attorneys with Peckar & Abramson, PC, were featured presenters.

Lange parsed which contracts and which employees are covered by the executive order. Basically, it applies to new contracts on or after Nov. 14 that arose from solicitations before Oct. 15, as long as the contract exceeds $250,000.

The EO covers any contract extensions and renewals in that timeframe. Indefinite duration, indefinite quantity (IDIQ) contracts are also covered.

Some contracts may remain unaffected based on those terms. However, Lange cautions that many agencies are issuing blanket requests to adhere to the EO and modify existing contracts accordingly regardless of contract date or type.

An example of an unaffected contract might be a supplier contract, since the EO focuses on service and construction. A supplier still may see an email or call asking for modifications.

An East coast contractor that does significant federal work and was not part of the MCAA webinar reported that they had not encountered any modification issues so far. Communications hurdles have been another story.

“At the beginning of the pandemic and up until very recently, interactions with federal contacts had been incredibly difficult,” said the contractor, who asked to remain anonymous. “Working from home for many of them became challenging, and phone calls and scheduling became near impossible. After the Federal government instituted the mask and vaccine mandates and return to work dates for many sites, we have found it much easier to reach our federal contacts.”

EO 14042 takes an aggressive approach to which employees of a federal contractor must get vaccinated. Many federal contractors may have to rethink employee working locations as a result, and the effect is compounded by EO language that extends these requirements to a qualifying contractor’s subcontractors as well. 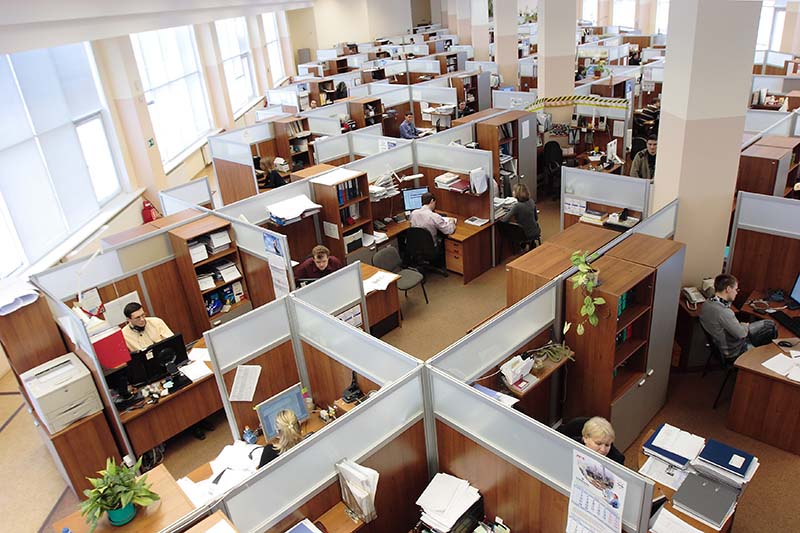 ALL OF THE ABOVE: If an employee in one corner works on a federal project, does the Executive Order require them to get vaccinated? Yes. What if they don’t work on the project directly but provide legal support? Yes. What about everyone else who only shares a workspace and does entirely unrelated work? Also yes. (Courtesy of David Marks / Pixabay)

As with the previous scenario, Lange said that the requirements do not have to be “flowed down to suppliers who are not performing labor in support of the contract.”

And as with the previous scenario, it is simply easier for an organization to issue blanket requests to all of their partners than weed through who is and isn’t affected. Lange has seen larger contractors trying to flow the requirement down to all of their suppliers anyway.

Whether working for contractors or subcontractors, employees are subject to the EO if they work directly on the covered contract. That’s the easiest part to determine.

The vaccination requirement extends to those who work “in connection with” the contract. Lange explained that duties necessary to the performance of the contract but not directly performing the specific contract work may include areas such as administrative, human resources, billing, and legal. It’s a wide net.

The final component is potentially the most disruptive for a business. The EO also covers “employees not working in any connection to the contract but who are working in a covered contractor workplace,” Lange said.

Basically, this means that any employee, regardless of duties, must also get vaccinated if their workday simply puts them in any shared space with any other employee working on a contract covered by the EO.

So, Lange said, some of her clients have looked into sending folks to work at home, or to WeWork type spaces, or to the project site itself. Employees would be exempt if they do not work on, or in support of, a covered contract and they also work in locations with zero contact with such employees.

Lange cautioned that the definition of shared space extends well beyond an actual office or workspace. Even parking lots, parking garages, and common indoor spaces where qualified employees temporarily mix with other staff would pull all of those employees into the vaccination mandate, too, even if they work in different buildings.

Lange reminded the audience that for government contracts, modifications are bilateral, with both parties consenting and signing.

She said it is still unclear if the government has the right to unilaterally modify a contract, but even if it can, it would likely have to give a change order to add such a clause.

Given the habit of some agencies to send blanket modification requests regardless of whether a given contract is covered, a contractor’s first step is to determine if the contract qualifies.

However, Lange warned, refusing to modify because the contract is not subject to the EO can still have drawbacks. She said several agencies have advised that refusing contractors may have more difficulty receiving time extensions for current work, and their evaluations may note that the modification was refused.

“I believe they would have difficulty” enforcing any actual penalty against the contractor, Lange said, but such pressures may arise.

Lange had some practical advice for contractors who do agree to a modification, regardless of whether the contract qualified or not:

Of all these considerations, Lange expects conflicts with lower-tier subcontractors over the vaccine mandate to generate the most headaches for contractors.

The anonymous East coast contractor has found that to be the case so far.

“We have definitely felt the impact on our subcontracted work. As services are needed, we find that many of our subcontractors are having issues obtaining vaccinated workers. This, in turn, is causing delays in the services we are required to provide. Because the mandate has not yet taken effect, we have not felt a monetary impact.

“However, if subcontractors continue to have issues getting their workers vaccinated, we risk some hefty contract modifications and fines that could negatively impact our bottom line. We could also see negative comments in our contract performance assessments that could cause us to lose out on future opportunities.”

Lange concurred about the difficulty of replacing subs (while staying on schedule). She surmised that the government may direct a contractor to simply terminate or lay off employees or subcontractors who refuse.

When an attendee asked if the government could cancel if the contractor refuses to sign a modification on a qualifying contract, Lange said, “Yes, they have the right. And maybe for default as well as for convenience.”

David added that unions will have many of the same tasks as other management in terms of establishing detailed policies regarding vaccines and vaccination documentation management.

Some states may include booster shots in the paid leave requirement. Some employees may provide fraudulent materials as proof of vaccination. Some contractors may ask for reimbursement for extra administrative costs.

Collective bargaining and labor issues like these will need to be sorted out. A vaccinated workforce solves or skirts many potential problems, but the reality — especially in construction — remains that a substantial group will not, at least not at first.

In the meantime, Lange says contractors working on federal property can expect requests for lists of employees who need access and their vaccination status. The government may prefer to ask for the list, relying on the contractor’s word to avoid managing those workers’ vaccination cards itself.

She also reported a number of lawsuits opposing the executive order.

“I personally believe some aspects are too broad and may be constitutionally challenged,” Lange said. Emphasizing the speculative nature of the comment, she suggested a 50/50 chance of a temporary restraining order against the EO.

Subsequently, a U.S. District court in Kentucky did block enforcement of the requirement for vaccination clauses in new federal contracts. That preliminary injunction only affects contractors in Kentucky, Ohio, and Tennessee while litigation continues.

Still, “I would not encourage people to stop taking steps to implement it on the hopes” that a court challenge will succeed.

“Right now, the focus is on workers' safety and getting people vaccinated by any means necessary.”

So, You Received an Exemption Request

In the recent MCAA webinar, Peckar & Abramson’s Lauren Rayner Davis delved into medical and religious exemptions and how to handle them.

She did note that objections regarding “personal liberties,” “fear or distrust of the government or vaccines,” or that “some vaccines are only approved for emergency use” do not qualify for a special accommodation.

For medical requests, she reminded employers to follow ADA requirements and to seek medical documentation supporting the request.

Religious exemptions get into Title VII of the Civil Rights Act. Davis said employers are not required to have a discussion with an employee before making a determination, but it is best practice.

Employers may make limited factual inquiries into the circumstances of an employee’s claim of sincerely held religious belief, she said, if the employer has doubts. She encouraged businesses to have established procedures for dealing with such requests and to consult counsel before turning down a request.

Options may include masking and distancing; remote work; reassignment; or unpaid leave, which she framed as a last resort.