This website requires certain cookies to work and uses other cookies to help you have the best experience. By visiting this website, certain cookies have already been set, which you may delete and block. By closing this message or continuing to use our site, you agree to the use of cookies. Visit our updated privacy and cookie policy to learn more.
Home » HVAC Contractors in Oregon and Washington Deal with Record-High Demand
HVAC ContractingNewsBusiness ManagementHVAC Residential MarketHVAC Light Commercial MarketAir Conditioners

HVAC Contractors in Oregon and Washington Deal with Record-High Demand

Customers and contractors feel the heat in the Pacific Northwest

“A normal day, we book 40 to 50 calls,” said Travis Smith, owner of Sky Heating & Cooling in Tualatin, Oregon. And how was it at the peak of the heat that blanketed the Pacific Northwest at the end of June?

The company faced a deluge of phone calls, emails, and online bookings as the temperatures escalated over the course of a weekend. By Sunday, Smith’s online booking vendor told him that he had broken the record for the Schedule Engine software for bookings in a single day even though Sky Heating & Cooling is a fraction of the size of some larger customers.

Smith’s company was not alone. He knew of another local contractor who said they received more calls in a seven-day span than they did in all of 2020.

Which is where the situation enters “too much of a good thing” territory.

“All my friends were like, ‘Oh, that’s amazing,’ but 1,100 calls is bad. That’s to the point where you’ve passed through the good, and you’re back to bad again.”

Looking over two weeks out for new appointments, Sky Heating & Cooling eventually added a message to its home page to let the public know they were not accepting new customers at that time.

Extreme heat is no stranger to certain parts of the U.S., but the timing and the location of this event added new hurdles for local contractors and of course created uncomfortable and sometimes fatal conditions for residents.

When Angie White, director of human resources and customer service at Mercurio’s Heating & Air Conditioning in Tacoma, Washington, was asked about the heat wave’s impact on demand for repairs, she said it was at an all-time high. Asked about system replacement demand, she pointed out how location put a twist on the situation.

“The word ‘replacement’ is a bit of a misnomer for what is actually happening here,” she said. “In reality, over half of the homes in our area don't have air conditioning. While some people have asked us for proposals on replacing their system, the vast majority of bid requests have been to add air conditioning. This heat wave is a huge motivating factor for people to finally take the plunge on adding A/C to their homes.”

It also disrupts what has often been a gentle rhythm of work for contractors. White said some joke that June is really more like “Juneuary” for its frequently cloudy, cool days. As a result, conventional wisdom is that summer doesn’t really “start” until after July 4.

Because of this gradual easing into summer, “air conditioners and heat pumps normally have a several-month timespan to break down,” she said.

This June’s heat wave served to concentrate many of those annual breakdowns into a very short period of time.

In Oregon, Smith estimated that 40% of homes don’t have air conditioning. The region has traditionally benefited from significant temperature drops at night, even in warmer stretches. This time around, exceedingly warm overnight temps meant there was no respite for anyone.

At Mercurio’s, White recruited extra staff for a “Heat Wave Dream Team” and worked considerable overtime herself as the company accommodated many more of that weekend’s callers than they would have otherwise been able to help.

Still, there are limits, and technicians are not immune to the temperatures, either.

“We pulled back and made the decision to move people into standard [scheduling] windows,” Smith said. Sky Heating & Cooling did not book much overtime, reasoning that if one tech goes down, “that’s 20 people they can’t serve because we served two extra people one night.”

Smith tried to get technicians out of the field by five o’clock with the only exceptions granted for some maintenance agreement customers. The heat wave represented added value for those customers since the company stopped offering quotes for new equipment to the general public, given workload realities.

Demand Up, Supply Down

White observed that the heat wave was only going to worsen existing supply chain issues caused by the pandemic and other contributing factors.

“Everyone will be wanting the same parts and equipment, and we'll have to see how this plays out in the upcoming weeks and months as the backlog just gets longer.”

One such shortage is portable air conditioners, which some contractors in other parts of the country have occasionally used to offer customers interim comfort until a repair or replacement can be made.

Contractors in the Pacific Northwest have never had to keep those on hand, White said, and now there are none to be found even if contractors wanted to buy them.

“We’re out of flex duct,” he reported a few days after the worst of the heat. Some duct materials are out through August, if not longer. Smith had just gotten word that they were out of one of their more popular systems and another type of air conditioner.

“A couple of friends said that every area distributor is out of capacitors right now,” he added. That said, Smith was thankful for making it this long. Contractor friends in other parts of the country had run out of “random stuff much sooner than we have.”

Receiving priority status might look like the biggest win for Sky Heating & Cooling’s maintenance agreement customers in an extreme heat event like this, but it wasn’t.

The real upside for those customers is that their cooling systems weren’t breaking down.

That fact surfaced during a Sky Heating & Cooling team meeting when they were discussing all the breakdown calls. The data showed that their maintenance agreement customers were responsible for only around one of those calls per day.

Smith explained the truth behind such a powerful if inadvertent case study.

“Even in this heat, our maintenance customers aren’t breaking down. Because they know when to change their filter. They get reminders. Everything’s been tuned up, and they say yes to the necessary repairs.”

On the other end of the information spectrum, contractors in regions like this must face not only overwhelming demand in a heat wave but a significant need for education among some customers who have not had air conditioning that long or in such circumstances.

“We received many phone calls from people who thought that their fully functional air conditioning was broken,” Mercurio’s White said. “We had to do a lot of education about why homes won’t cool to 60°, why an upstairs might be warmer than downstairs, or why waiting to turn air conditioning on until your home is hot is a bad idea.”

So many Pacific Northwest residents had to deal with unprecedented discomfort until temperatures eased. Some died. Looking beyond the immediate crush, is not hard to imagine that this experience might motivate more people to prepare their homes and systems next spring.

Of course, contractors there — or in other unsuspecting areas of the country — can’t necessarily rule out another event before the summer is out, either. 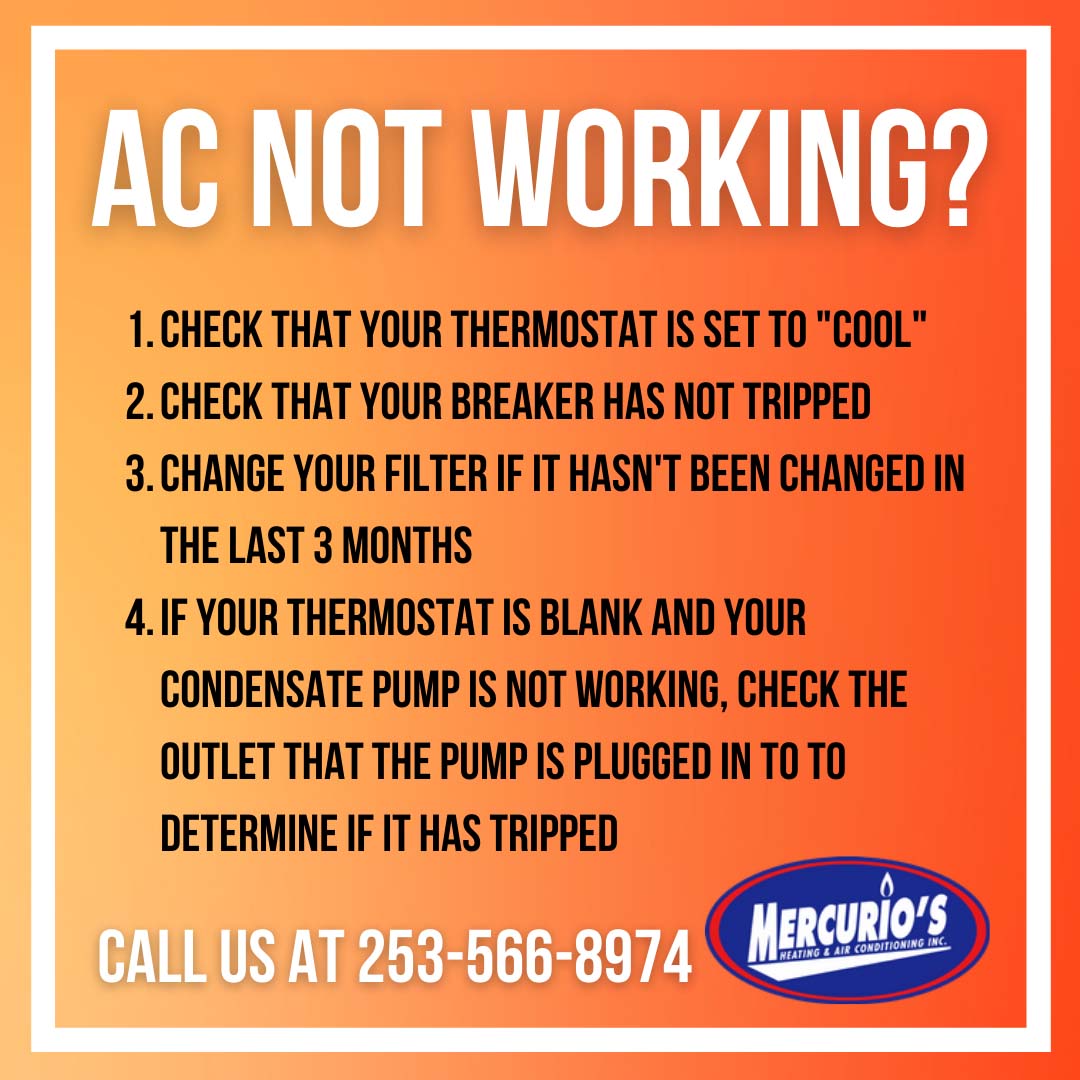 START WITH THE BASICS: The Northwest has many homes with no air conditioning and many more with owners new to managing the equipment. Deluged with calls, Mercurio’s educated many customers whose systems were actually fine.