This website requires certain cookies to work and uses other cookies to help you have the best experience. By visiting this website, certain cookies have already been set, which you may delete and block. By closing this message or continuing to use our site, you agree to the use of cookies. Visit our updated privacy and cookie policy to learn more.
Home » HVAC Industry Grapples With Shortages, Indoor Air Quality Claims
NewsDistribution TrendsIndoor Air QualityFiltration and UVHVAC Distribution News

Those working in the HVAC industry should be thrilled, as they have successfully made it through a year of unprecedented economic shutdowns that led many to believe a recession was imminent. Instead, the exact opposite happened, as demand for HVAC equipment exploded, and manufacturers struggled to keep up amid supply chain disruptions caused by the pandemic. 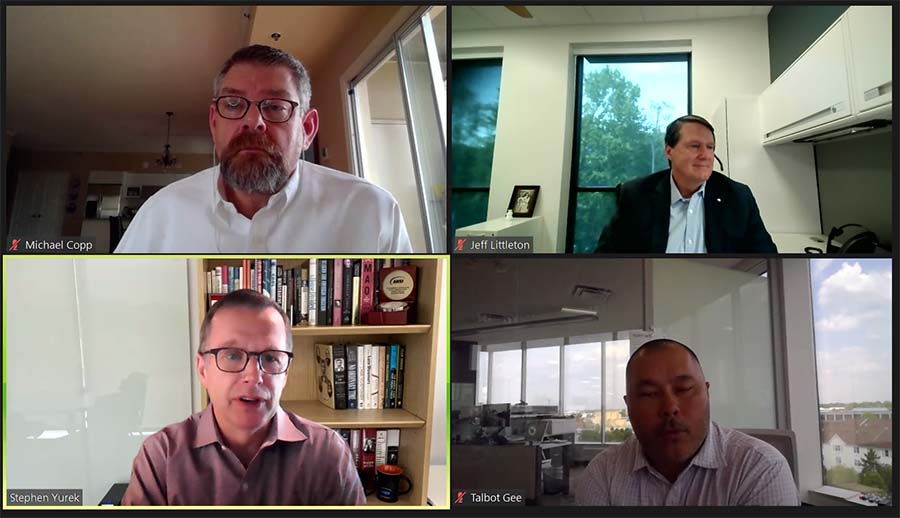 At a recent webinar, AHRI’s Stephen Yurek (lower left corner) asked experts from PHCC, ASHRAE, and HARDI about their concerns for the HVAC industry. (Staff photo)

Indeed, many contractors, distributors, and manufacturers reported record sales during the second half of 2020 and the first half of 2021, and there are no signs that momentum is slowing down. Some say sales could have been even higher had more equipment been available, but shortages of various units and components have been a problem for much of last year. And according to experts participating in a recent AHRI webinar (below), supply chain issues could continue to be a problem for the rest of the year.

“As long as demand stays strong, we're going to have these shortages,” said Talbot Gee, CEO of HARDI. “And this is not unique to our industry. Every vertical is having supply chain issues, which means I have to tell my distributors that their suppliers and manufacturers are having the same supply issues as they are. Everyone is assuming this is going to take at least the full calendar year to work itself all the way out.”

Part of the problem is that manufacturers are continuing to struggle with production issues, said Gee, as they are having trouble finding enough people to work in the factories. But a bigger chokehold is actually transportation logistics, from a shortage of shipping containers to backlogged ports to a lack of truck drivers. He said that some of his distributor members have ordered products and have no timeline on when they’re actually going to arrive. In addition, there are varying shortages causing intermittent problems throughout the supply chain.

“There is no singular trend,” said Gee. “The semiconductor shortage has a real impact, but it could also be a component that is disrupted somewhere or has a shipping issue, and then it negatively impacts a whole class of products. Sometimes it could be condensing-type products. We've even had copper disruptions, and simple things like line sets can be a big issue. I will say the furnace shortage is the one we're most concerned about, because it inhibits system sales going forward. And if we're late and behind in summer, imagine how late and behind we'll be in the winter. There is also a macro concern about ductless heat pumps, since so many of them are imported, and those imported products, on average, are the ones that have the most unreliable lead times for the most part.” 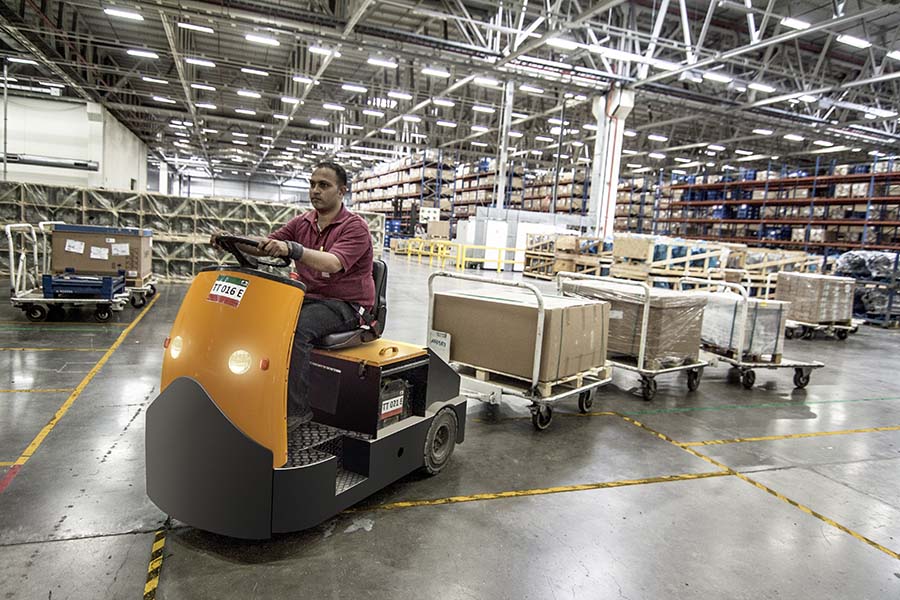 Inventories are fairly high at the moment, as HVAC distributors are carrying well over the normal levels, just to make sure that they'll have products for summer. (Image by Pashminu Mansukhani from Pixabay)

Even so, inventories are fairly high at the moment, as distributors are carrying well over the normal levels, just to make sure that they'll have products as demand continues to rise through the summertime, said Gee.

“Right now on average, we're looking at inventory levels somewhere between 15% to 25% higher than normal for this time of year in a normal year,” he said. “And most are projecting that their inventory levels will remain double digit higher than normal. For the most part, turn and earn is not going to be a key metric for a lot of distributors these days; it's going to be about preventing stockouts.”

“In California, construction costs are up 9% and in Seattle they’re up 5.2%, just in one quarter,” he said. “That's going to have an impact. I think we’re going to see a tug of war between projects that have been delayed and will be restarted — and that could be delayed further until the supply chain and its impact on construction costs begins to normalize.”

Supply chain slowdowns, rapid and unpredictable price increases, and the ability to get HVAC equipment are also some of the current concerns for contractors, said Michael Copp, executive vice president of PHCC National Association.

“In our recent survey, contractors indicated there were issues regarding supply chain shortfalls, commodities volatility, and also longer lead times to get materials so that they can complete their work,” he said. “While manufacturers were being very creative and working with contractors to find alternative products, in a lot of cases, they just weren't available. HVAC equipment is often just very late due to factory production issues.”

In addition to equipment shortages, lack of labor and employee absenteeism are major concerns for contractors, said Copp. “A number of our contractors have said they just can’t find technicians, and they are having a hell of a time with that,” he said.

While furnaces and air conditioners have been in high demand over the last year, IAQ products including MERV 13 filters, air cleaners, UV lights, and bipolar ionization have also become increasingly popular. These come with their own sets of challenges, though, and they may not always be well suited for each application.

“Everyone's defaulting to MERV 13 or, in some cases, HEPA filters, particularly in the education market,” said Littleton. “A lot of our design engineers are being asked by their clients to retrofit existing systems to put MERV 13 filters in, and the pressure drop behind the filter can be an issue. You have to be really careful, because a key part of fighting COVID 19 is to reduce the concentration of pathogens in the occupied spaces. If you get less ventilation flowing through that tighter MERV 13 filter, you can end up with a bad situation.”

While the demand for IAQ devices continues to be high, there is a lack of research and standards regarding the efficacy of the equipment. ASHRAE is planning to rectify that situation by developing test and design standards for various types of IAQ products; however, determining the appropriate methods can be a time-consuming and complicated proposition.

“Just think about UVGI and what kind of tests are needed for determining dosage curves for specific pathogens across a specific light spectrum, for example,” said Littleton. “And how does that apply to various mediums like aerosols or large droplets or dry and wet surfaces? And how do you commission a UV antimicrobial system in a new or existing facility? In an air handling unit or in ductwork? So a lot of standards, and a lot of research is frankly needed for all of those systems.”

To that end, ASHRAE’s Board of Directors recently approved the title, purpose, and scope (TPS) for a new standard, entitled “Method of Testing In-Room Devices and Systems for Microorganism Removal or Inactivation in a Chamber.”

While that is a good first step, Gee is concerned that the standards process will take too long to address some of the problems that are a major concern right now.

“Our distributors are bombarded daily by new sales pitches on new products or improved products in the IAQ space, and their No. 1 frustration is that they need some way to evaluate the claims of all of these products,” he said. “It’s easy to do for energy usage on a system, but it's almost impossible to do for IAQ systems. We don't have a great way of figuring out which of these IAQ technologies is the real deal versus snake oil. My concern is, we have a generation of contractors who won't touch IAQ with a 10-foot pole, because they're afraid of getting caught up in something that gets misrepresented or just doesn't perform to its stated claims.”

To combat that issue, Gee would like to see some kind of certification program for IAQ products or a credible seal of approval that would be based on performance metrics.

“The standards that ASHRAE is working on are going to be fantastic, but it's still holistic, and it doesn't necessarily specifically help contractors make a buying decision on a specific product,” he said. “We need that next mile to get done — and frankly, anything that can be done to accelerate it. I fear that this is kind of like the pet rock fad — there was a short period of time to sell the pet rock before it was gone. I'm afraid if we drag our feet too long, that some of these IAQ technologies might go that route, and we will have missed our window and not had a chance to really grow in that sector of the economy.”

Littleton agreed with Gee’s assessment but added that the focus on IAQ will continue to be strong even after the pandemic.

“Memories tend to be short, but I do think in terms of the impact of the pandemic, the increased focus on life safety issues and health issues — as it relates to IAQ — has legs. It's going to have a long-term impact — a permanent impact on the way we design systems for buildings,” he said. “ASHRAE’s method of test standard will define how to test the efficacy of some of this [IAQ] equipment. Then you do the research, and after that is done, we’ll develop design standards that define what is the best way to deploy some of this equipment based on its efficacy and its strengths and weaknesses, and so on.”

Due to the increased interest in this particular standard, Littleton noted that ASHRAE is considering allocating additional resources to accelerate its development, so that it could be available sooner rather than later. Still, he noted that even if its timeline is moved up, the standard will not be finished in time to help people designing buildings next year.

“I don't think it's a surprise to anyone that ASHRAE is not the fastest standards developer on the planet, but we’re very, very thorough,” he said.