From Texas, California, Washington, and Maine, panelists offered legislation insights in the second installment of the AHRI Spring Webinar Series.

State legislators past and present were joined by one lobbyist. The quartet’s video call highlighted marked differences in their states’ politics and their immediate agendas for industry-relevant legislation. However, the distinctions served to raise a theme hinting at how energy policies may develop on a broader level.

Washington was one of the states to pursue its own HFC phasedown schedule in the policy vacuum preceding the AIM Act. Representative Joe Fitzgibbon got into state politics primarily “to fight climate change” and has sponsored two phasedown-related bills. He chairs the state’s House Energy and Climate Committee.

He mentioned that his state has also passed a cap-and-invest bill. Late April’s Climate Commitment Act approved a carbon pricing market and makes Washington only the second state to set an economy-wide cap on greenhouse gas emissions. Its goal is net-zero emission for the state by 2050.

Looking ahead, one priority for Fitzgibbon is a program to deal with “end of life” refrigerant management and disposal. He would like to see an organized strategy for air conditioners and refrigerators to avoid large amounts of vented HFCs when units are discarded.

The legislator expects a recommendation for designing that program next year. In the meantime, this year the legislature also approved more frequent inspections for larger equipment.

In the “words matter” department, Washington also changed relevant mission statements from a duty to provide “electricity and natural gas” to providing “energy.” This, he said, reflects that the means is not as essential as the people’s need to have their air and water heated.

At this point, residential buildings are the largest emission sector that doesn’t have a broader decarbonization policy in place, Fitzgibbon said. He expects that maintaining a technology neutral attitude will help the effort.

While electrification is often most efficient, he said, everything from renewable natural gas to renewable hydrogen and other options can play a role in that mix.

In Texas, state senator Nathan Johnson had recently partnered with AHRI to update code legislation paving the way for A2L refrigerant use. 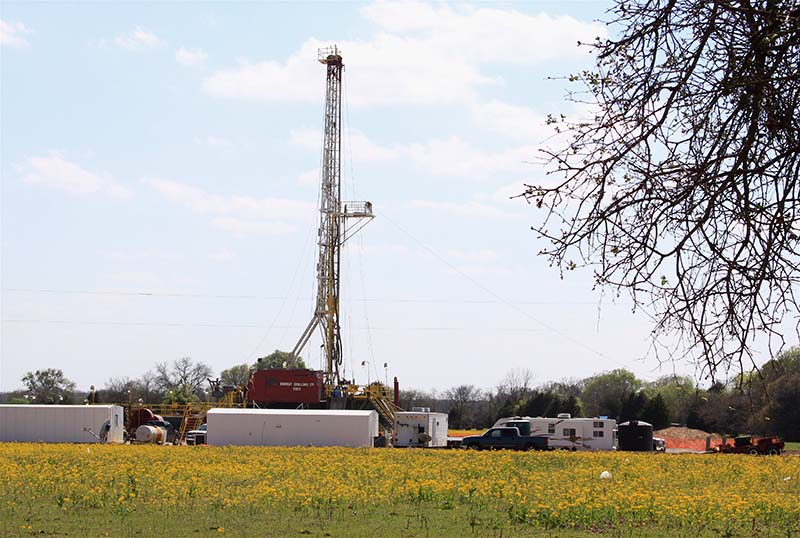 PART OF ANY PLAN: Any version of improved fuel management in Texas will accommodate natural gas production’s prominence in the state. Courtesy of Roy Luck (CC BY 2.0)

COVID and the major winter storm that pummeled the state demanded a lot of attention politically. Now, he said, “we’ve really got to fix our grid — for our state, and for the nation,” noting that the impact of the storm in Texas drove up natural gas prices in Minnesota.

As for the A2L legislation, “Our government is designed to pass no bills at all,” he half-joked, “so I think this is the first carbon reduction legislation we’ve passed in a decade.” As it did in Congress, Johnson said the A2L effort in Texas benefited from the potential to clean up the environment while driving commerce forward.

Texas is not short on fuel options. Johnson noted it is a leader in renewables as well as natural gas.

“We’re going to need to make sure we have dispatchable energy — how to augment wind and solar — and we’re seeing a lot more activity in batteries,” he explained.

Johnson anticipates the ability to store massive amounts of generated wind power with batteries before long.

“But it will require more transmission and infrastructure,” he said. He continued that with so many forces in play in Texas politics, any major initiative has “someone with a big checkbook who is for it” along with others who inevitably see any change as a disruption.

Johnson would also like to see his state do more with distributed energy. This would involve aggregating small energy sources that are already installed as backups to large commercial operations. When the owners do not need that energy, they would sell it to the grid.

Johnson describes the state’s Energy Only as a unique, “highly contrived market. All these different mechanisms in lieu of regulation” that are designed to trigger market signals to encourage investment in the right things at the right time.

“Most of the time, it works beautifully,” he said, “except for when it freezes for a week” — at which point a scarcity-based system gets strained and “things get anxious.”

Whether that leads to something like a regulated natural gas market on demand for emergencies only remains to be seen.

Just as Washington’s Fitzgibbon sees a more complex overall energy solution than just electrification, Johnson points to the state’s formidable natural gas role and said “if we were to have a more symbiotic relationship between gas and renewable, we could have a nice, efficient, clean system.”

“All of this has great potential to provide clean, reliable, cheap energy, but it all takes effort.”

Johnson said the winter storm has focused the state’s attention more than usual, so there may be more room than usual to make progress in these areas.

As a lobbyist for MKA, Dawn Keopke shed some light on the California state scene.

The AIM Act’s passage late last year did not slow down activity on the legislative or regulatory front. Koepke mentioned a fairly large climate-related bill is still in process in the legislature, along with work on decarbonization strategy.

While Texas had its winter storm as a distraction and/or a motivator, California Governor Newsom had just announced a water infrastructure and drought package. 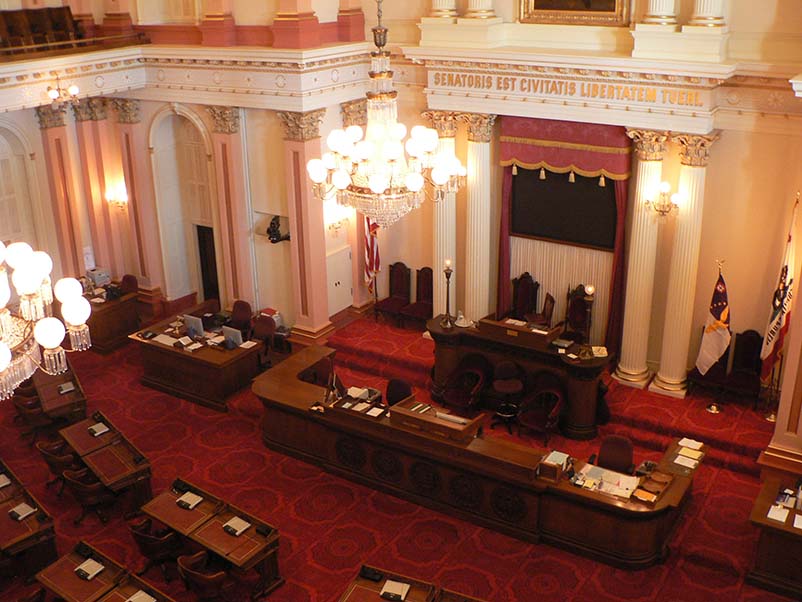 LITTLE ROOM FOR COMPROMISE: The California legislature, half of which meets in this Senate chamber, currently includes Democratic majorities forwarding electrification measures more aggressively than the business community might like.

Not only does California employ a fairly rare professional legislature, but it is in session through the bulk of each year, compared to the Texas legislature that only meets every other year.

At the moment, Democratic state legislators enjoy a two-thirds majority in both chambers. Koepke explained that gives Democrats sufficient numbers to pass tax-related legislation while also giving some flexibility to members in vulnerable districts.

The dynamic “certainly has its challenges for the business community,” she said, specifying that employment and HR issues can be “very difficult” in an environment where Republican ranks have shrunk and the Democratic position has seemed to trend leftward.

Businesses have stepped forward to support moderates, she said, but this has been counterbalanced to some degree by nongovernmental organizations and environmental concerns wielding a fair amount of influence in the legislature.

To that end, a “subset” of legislators believes in having more options in the energy toolbox, Koepke said, especially given the state’s climate. Nevertheless, electrification enjoys a more dominant role in the discussion these days compared to other options and some other states, thanks to a combination of legislators, coalitions, and municipal governments.

Mason said he got his start dealing with cooling systems and ice rinks as the president of a major junior hockey team. He decided to enter politics when the legislature passed a hockey ticket tax.

In Maine, Mason said, weatherization is always a big deal, not just because of the climate but because Maine “has the oldest housing stock in the nation.”

The state also has its own power grid twist, with half of the state being served by the Canadian grid. An effort to bring that half back onto U.S. supply for security reasons is currently a hot topic.

In contrast to California’s professional legislature, Mainers are proud of what Mason describes as a citizen legislature tradition. He gave a personal example.

“My entire family except my sister has at one point served in the legislature, and we’re not a particularly political family.”

This becomes HVAC-relevant, he continued, because this culture means a lot of lawmaker education is necessary. People may be handed authority regarding sectors where they may not have much or any personal background.

So, Mason continued, someone has to go in and teach on questions like “What is an HFC?” According to Mason, AHRI has helped with explaining why the issue is important and why it is not a partisan issue.

Mason sees an “all of the above approach” to energy fitting for its own reasons in his state.

As the state debates a hydro power option from Quebec and awaits a new transmission line from the St. Lawrence that will serve New England, Mason says weatherization is not the only issue for an aged housing inventory. The state simply needs more housing.

That problem has been exacerbated by COVID-fueled increases in working from home, hand in hand with people from the mid-Atlantic moving to Maine or relocating up to their summer homes for more extended working periods.

Like more than one other state represented on the call, Maine comes to energy issues in the context of its own resources and history. To that end, the webinar suggested that tailoring effective decarbonization policies on the state level might sometimes require the electrification movement to approach other fuels and tactics more as complements than competitors.