This website requires certain cookies to work and uses other cookies to help you have the best experience. By visiting this website, certain cookies have already been set, which you may delete and block. By closing this message or continuing to use our site, you agree to the use of cookies. Visit our updated privacy and cookie policy to learn more.
Home » Gyms Need HVAC Upgrades, But Uncertainty Increases Financial Risk
NewsHVAC Light Commercial MarketIndoor Air QualityCommercial Indoor Air QualityCoronavirus Coverage

The COVID pandemic has hit some businesses especially hard. Restaurants, theaters, and gyms have all faced prolonged closures and then false-start reopenings, followed by a second round of shutdowns. The businesses have something else in common — trying to ease public concerns by investing in HVAC upgrades.

Sand and Steel Fitness is a boutique gym specializing in personal training, CrossFit, and yoga. Like many such facilities, the Alexandria, Virginia, company invested in an array of HVAC tools to protect employees and clients. Sand and Steel installed a fan with bipolar ionization from Big Ass Fans in the middle of the gym to deactivate harmful airborne substances, such as the coronavirus. It paired that with Carrier Opticlean machines that use HEPA filters to capture microns. There are also air quality sensors throughout the gym to ensure everything is working as it’s supposed to.

The gym pairs these HVAC tools with other procedures, such as temperature screenings and increased cleaning. Sand and Steel had the chance to test its precautions in December when owner Paul Roberts contracted COVID. In the two days between when Roberts first started to feel symptoms and when he tested positive, he worked with 20 gym members. Two weeks later, neither staff nor members had tested positive.

"I'm relieved to see that our COVID-19 safety plan worked, although I wasn't planning to be the original test subject,” Roberts said.

The increased interest in investing in HVAC would seem to make gyms attractive clients for commercial HVAC contractors. But the problems they are attempting to avoid with this equipment outweigh the potential. 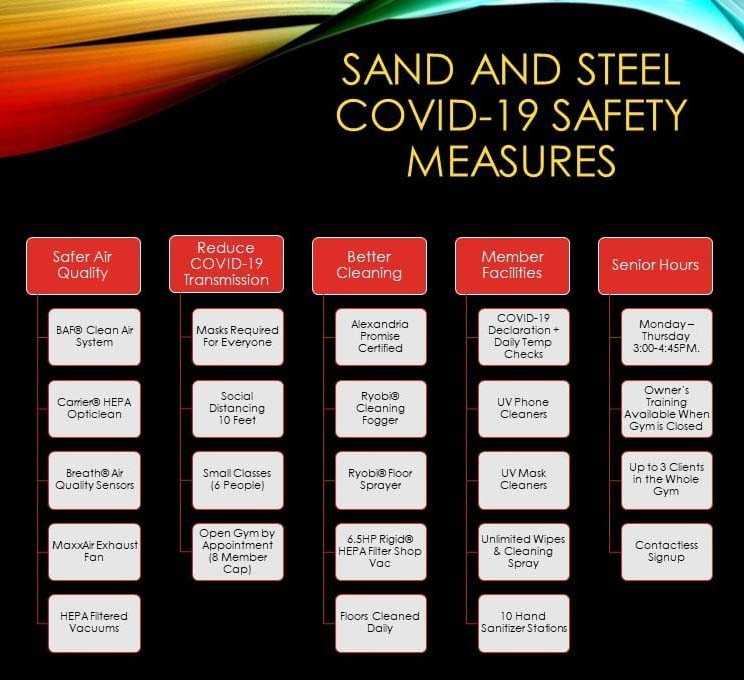 FIT AIR: Sand and Steel, a Virginia gym, shared the steps it’s taking to mitigate the spread of the coronavirus, including upgrades to the facility’s HVAC system. Photo courtesy of Sand and Steel via PRNewswire

Gym Wants More HVAC Equipment, but can They Pay?

Michael DeRitis, owner of Madison and East Mechanical Corp. in Parkland, New York, has worked on plenty of gyms over the years. He said while gyms are asking for more HVAC equipment from their contractors, those contractors worry about getting paid. DeRitis is still waiting on payment from a gym project he finished last spring.

“I can’t blame them because they aren’t making any money,” he said. “Even if you can go there, it’s dead.”

New York State allowed gyms to reopen in August with numerous conditions, including rules about ventilation. State officials said gyms should operate with filters of MERV 13 or greater. If they are unable to operate at that level, they must have an HVAC professional document their inability to do so and adopt additional ventilation and mitigation protocols from ASHRAE and the Centers for Disease Control. Many gyms are asking for extra precautions, such as UV lights, DeRitis said.

Each extra precaution requires an increased investment in equipment, he said. More outside air means more heating and cooling to keep occupants comfortable. Putting in higher grade filters means more powerful units to extend the static charge. But gyms have to make these upgrades to meet not only the expectations of state regulators, but their customers.

Gyms are structuring their systems to filter air for much larger crowds than they are currently attracting. This creates a mismatch of expense and reward. That’s why DeRitis is leery of any gym projects unless they have a good source of funding behind them.

It’s uncertain what would happen to gyms if there were another major spike in cases. It’s also uncertain how consumers’ behavior will change now that people have spent considerable money for home exercise equipment. Right now, DeRitis said, he would think twice before bidding on a new gym customer as a result.

DeRitis is able to put his gym experience to good use in another area, though. He recently worked on two school projects that included fitness centers for the students. These projects come with guaranteed funding and the schools are spending plenty on the fitness centers.

“I wish I was back in high school again,” DeRitis said.