“It is going to be a challenging environment around business regulation in this new administration.”

So said Jim Ellis, a senior political analyst with BIPAC, in an ACCA virtual town hall on Dec. 15.

The previous week, HARDI’s Palmer Schoening and Alex Ayers conducted a post-election session as part of the virtual HARDI Summit. Like Ellis, they were speaking after the presidential election but before the January runoff elections in Georgia created a 50-50 tie in the Senate, with Vice President Kamala Harris casting any deciding votes.

Schoening outlined some potential policy and tax issues relevant to distributors and contractors alike. He mentioned that the Biden administration might work to revert assorted estate tax rates and thresholds to earlier parameters. He sees that as especially likely given the Democrats’ newfound, if razor-thin, advantage.

Elsewhere in death-related policy, Schoening speculated that eliminating the step-up in basis for the value of stocks transferred in cases like inheritance could become an issue, albeit a tougher task given that it would have a much wider impact than any estate tax changes.

Focusing on taxing wealth rather than income was another scenario Schoening raised, although President Biden has offered no such proposal.

Biden has specifically not endorsed the Green New Deal, but Schoening pointed out that that does not preclude parts of it from becoming implemented.

Schoening pointed out that a Democratic tiebreaker in the Senate may raise the question of eliminating or changing current filibuster rules. If Democrats keep the filibuster intact, that would require more across-the-aisle effort and could have an overall moderating effect on any major legislation.

Similarly, the Democrats’ fragile advantage in that chamber may heighten the need to accommodate the party’s more moderate Senators in order to pass any closely contested bills.

Ayers, meanwhile, identified the furnace rule proposed during the Obama legislation as something that the Biden administration could revive. One hitch at the moment is litigation asserting that the DOE has not met its own deadlines over the lack of an updated rule.

The HARDI team mentioned that it will work to prevent the expiration of a host of tax breaks, and Ayers added earlier this year that they will resist any other efforts to roll back Trump-era tax cuts, should such efforts materialize.

Tax items in question include marginal tax rates, aforementioned estate taxes, and S-Corp tax cuts, all of which are currently set to expire at the end of 2025. HARDI will also work to protect various industry-relevant expensing measures that will start to expire in 2022.

“The Biden plan is significantly less harmful than the Green New Deal when it comes to our industry,” Ayers said.

“We will meet what the president-elect is looking for in a climate plan,” he added in that December session, offering that Biden’s goals seem to be aligned “with where the industry’s already going, which is the AIM Act.”

The AIM Act’s national HFC refrigerant phasedown plan had a long road to and through Capitol Hill before President Trump signed it into law as part of the late December flurry of legislative drama and activity.

As ACCA’s Chris Czarnecki pointed out, final AIM Act wording did not contain federal preemption provisions for HVAC uses that would override any state’s individual HFC-related phasedown laws. Czarnecki and many others in the industry hope that despite the lack of official preemption, the presence of a federal plan will dissuade states from taking further action on their own.

At the ACCA event, president and CEO Barton James ran down some of the A2L-related topics that are yet to be settled: dry shipping of equipment, the transportation of A2Ls, upright storage in trucks, warehouse retrofit requirements, and the duration of certifications for technicians handling A2Ls.

That A2L use will likely begin in the commercial sector, but James expects A2Ls to wind up being used “illegally or mistakenly” elsewhere as well once they are available.

Ayers reported that HARDI has been working with the International Code Council to establish more business-friendly storage regulations that would be less expensive to meet (e.g., storage requirements, fire barriers) while recognizing the difference between the A2L-associated risks and those of more flammable substances.

HARDI would like to see OSHA and Department of Labor restrictions lift from 10,000 to 50,000 pounds in certain circumstances, along with adjusting the amount that requires a HAZMAT license. Currently, a “materials of trade” exemption allows 440 pounds on a truck.

Ayers sought to put concerned attendees at ease about A2L use. 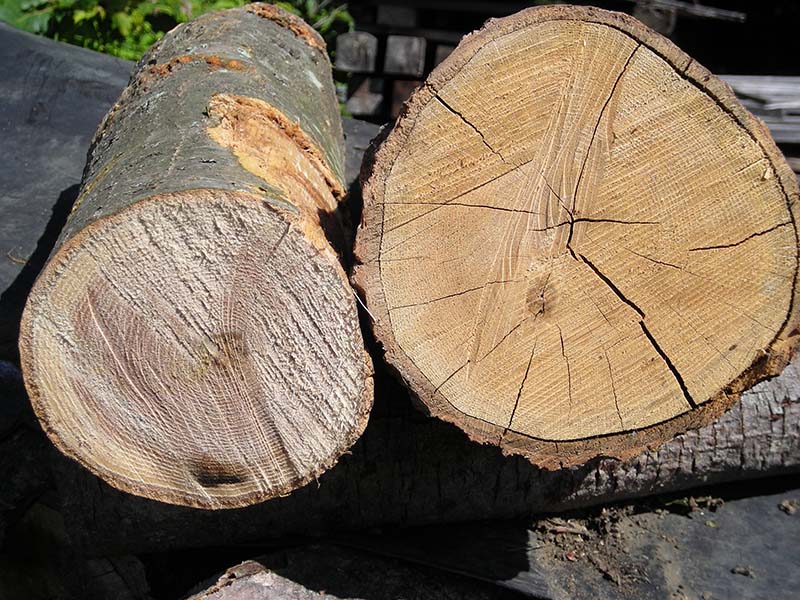 WOOD A METAPHOR HELP?: “I know a lot of folks get worried that this is something like propane, but it’s not,” HARDI's Alex Ayers said of A2L refrigerants. For a point of comparison, Ayers described A2Ls as burning “roughly between green wood and dry wood.” Image courtesy Surryroger, CC BY-SA 3.0

“I know a lot of folks get worried that this is something like propane, but it’s not,” he said. For a point of comparison, Ayers described A2Ls as burning “roughly between green wood and dry wood,” noting that multiple circumstances had to align for any sort of unwanted flame in the first place.

“Propane burns about four times hotter,” Ayers noted. “When properly installed with proper precautions, they are no more dangerous than the refrigerants we use now.”

The timing of the code cycles, the unknown regulatory outcomes that arrive with a new administration, and the phasedown plans pursued by more assertive states do combine to weave significant uncertainty into the equation despite much progress by AHRI’s safe refrigerant task force.

Industry and government players will continue to slowly fill in the remaining blanks.

As for business ownership, these industry associations picked up a big win when the tax-deductible double-dip intended by at least some of the lawmakers who crafted the Paycheck Protection Program also became law in December. Lobbying for simpler loan forgiveness terms and procedures also paid off for a large group of PPP borrowers.

As for what remains on the legislative radar, Czarnecki and James encouraged the revival of the HOPE For HOMES Act, introduced last summer by Senator Chris Van Hollen of Maryland. This proposal would confer up to a $2,500 rebate for homes that demonstrate 20% energy savings, and possibly up to a $5,000 rebate for those achieving a 40% reduction.

ACCA would also like to see the Home Energy Savings Act succeed. This proposal would extend the 25C tax credits, but it would require equipment to be installed correctly according to ACCA’s quality installation standard.

Maine’s Senator Angus King also offered the Air Source Heat Pump Act last year, offering tax credits to homeowners who purchase qualifying heat pumps. Again, this measure includes ACCA quality installation language in what would be a win for both homeowners and skilled contractors who work to do things the right way. Czarnecki echoed some of Schoening’s earlier optimism about incentive-related bills, noting this was an area where even a divided Congress might find common ground.

Contractors and distributors can expect more than a new Congress and new presidential administration near the top of the year. James mentioned that he is starting to hear of price increases coming soon, with some if not most upwards of 10%.

Tariffs and how HVAC personnel should fit into the COVID-19 vaccine rollout’s priorities will also need to be navigated before long. ACCA will also be pushing the Biden administration to continue the Pledge To America’s Workers, to which ACCA has contributed a sizable amount of support. Decisions surrounding COVID-19 vaccines may prove difficult, examining “what the expectations are as an employer,” as James said, when it comes to procedure and the possibility of any vaccine mandating.

Last but not least, SEER ratings are going up. Ayers said a major HARDI goal involves replacing any “installation date” language with manufacture date wording for any deadlines. This difference allows the industry to sell through any existing stock after a deadline without financial penalty. Ayers hopes to see that finalized sometime in 2021 so that 2022 buying will not be affected ahead of a 2023 transition.