This website requires certain cookies to work and uses other cookies to help you have the best experience. By visiting this website, certain cookies have already been set, which you may delete and block. By closing this message or continuing to use our site, you agree to the use of cookies. Visit our updated privacy and cookie policy to learn more.
Home » Rural HVAC Contractors Have Opportunity for Business as Families Move Away from Cities
Manufacturer ReportsNewsHVAC Residential MarketBoilers & HydronicsCoronavirus Coverage

As you read this, thousands of American families are considering a move to less densely populated areas. Towns and cities within the Rocky Mountain states — Idaho, Montana, and Wyoming, specifically — are seeing unprecedented population growth as the idea of living in rural and suburban areas gains interest among residents of the country’s more populated regions.

Popular opinion in these scenic areas attribute the migration to three major factors: social unrest in urban areas, prevalence of COVID-19 cases, and the ability for more people to telecommute. The owner of a moving company in Cody, Wyoming, noted that they had relocated a dozen families from California in May alone. Counter to what would be expected during a recession, real estate prices are rising. Similar stories come from Montana.

“A customer of mine who is a real estate agent just sold a $700,000 home sight unseen to a family from back East,” said Andy Mickelson, owner of Mickelson Plumbing and Heating Inc. in Missoula, Montana. “He took them through the home via Skype just before a contract was signed. Migration is extreme. Houses are selling fast — and high.”

Earlier this year, the same real estate agent referred a recent homebuyer to Mickelson for boiler replacement. Not surprisingly, the house was purchased in a hurry.

“The homeowner ran out of domestic hot water a week after buying the home, so we replaced the igniter on the mod-con boiler, which was supplying heat to an indirect tank,” said Mickelson. “We also found that the heat exchanger had failed, so we returned to replace the boiler as soon as we could.” 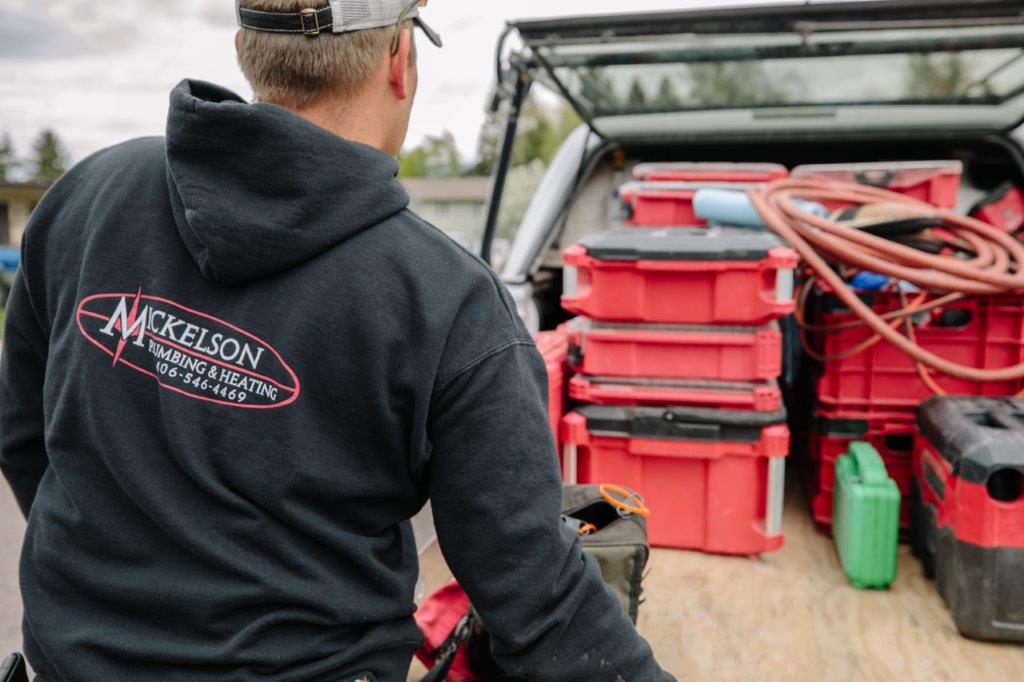 Mickelson is a Montana native who started his own company in 2011, after 13 years at a large mechanical firm. Today he employs two full time technicians and has the work for more — if only he could find the right people. He’s a self-proclaimed wet-head, but his skill set also includes commercial controls, plumbing, and air conditioning.

While Mickelson’s work can be seen in commercial buildings and full-blown mountainside mansions (he’s done work for some of the world’s most famous musicians), this specific home was average in every way.

The 2,500-square-foot bi-level was constructed in the 1980s, and the aluminum-block condensing boiler he found in the house was, to his knowledge, boiler number two. Installing boiler number three, a 199 MBH Aspen Combi made by U.S. Boiler Company, would have been pretty straightforward if not for several messy system changes that had been done in the past. 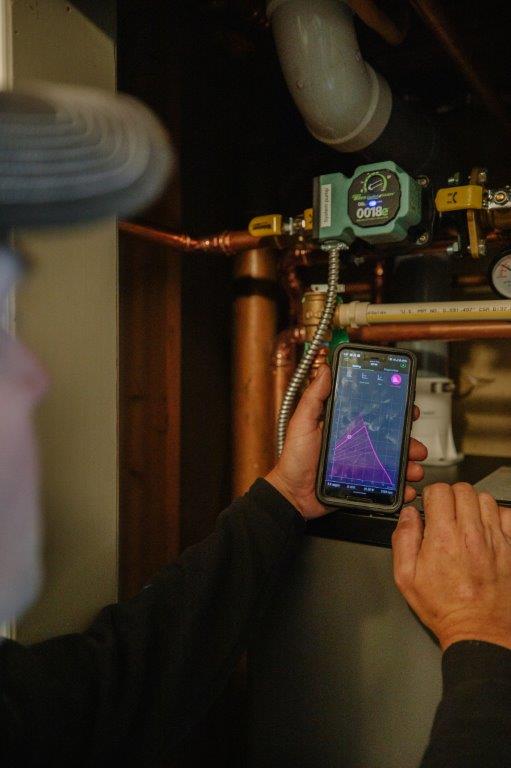 “The system was a result of 30 years of additions and haphazard corrections,” explained Mickelson. “At one point, a water softener had been added and an irrigation system was tee’d into the domestic piping. On top of that, the first retrofit was a hack job.”

At least the three zones of fin-tube baseboard were in good condition; one was downstairs and two were upstairs. By the time he started to cut the supply and return piping out of the closet mechanical room, he already had a plan for the new system.

“I pair a heat load calculation with a radiation measurement,” said Mickelson. “This not only tells me the supply water temperatures I’ll need for proper outdoor reset programming, but it also gives me the flow and head I’ll need out of my system pump. This is valuable information to optimize comfort and efficiency with two components I used on this job.”

“A Taco 0018e circulator allows me to precisely set my flow rate for a 20°F Delta-T, and paired with U.S. Boiler’s Sage Zone Control, the pump will respond perfectly as zones open and close.”

Without the help of a buffer tank, the Sage Zone Control allows the boiler to start at low fire and only increase to the firing rate needed for the zone (or zones) calling. Mickelson inputs the size of all three zones and the boiler fires accordingly, never exceeding the actual load, and the ECM circulator responds by modulating the flow rate across the system.

“A single circulator with baseboard and zone valves is perfect for this setup,” said Mickelson. “There’s never a concern about being over- or under-pumped. This house needs about five feet of head and five GPM with all zones open.

“Both the Sage Zone Control and the 0018e are very easy to program,” he added. “The panel is accessible through the boiler’s Sage Control, which is connected to the boiler via a CAT 5 cable. I access the pump via a Bluetooth app on my phone. It has a number of different modes: constant speed, proportional pressure, and constant pressure, as well as a self-adjusting proportional pressure mode.”

For simplicity and space savings, Mickelson installed the Aspen Combi instead of adding an indirect tank. The house only has two occupants, so there’s never a concern of running more than two showers at a time. 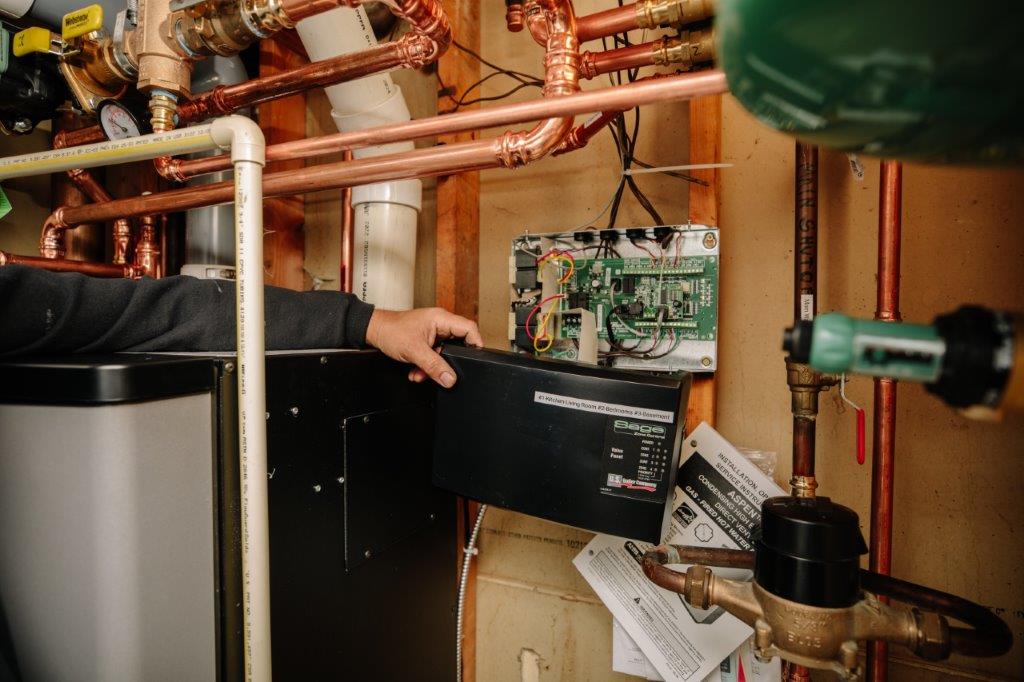 Connections to the combi boiler were very easy to make from the bottom side of the unit, even in the cramped closet. Adjusting the burner for Missoula’s 3,200-foot elevation was simple. The factory-supplied exhaust fitting has a built-in test port for a combustion analyzer, and the boiler cabinet has a side access panel for easy access to the gas valve.

“Taco’s mobile app for Bluetooth connection to the circulator makes changing modes, etc., very easy, and all feedback from the Aspen boiler and the Sage Zone Panel read out in plain English on the boiler’s touchscreen display,” said Mickelson. “I didn’t need a secret decoder ring to set the unit up.”

The homeowner’s frustration at buying a property that immediately needed a new boiler came at least with a silver lining — the new system is comfortable and reliable. Ignition is smooth, and the loudest noise that the system makes is the baseboard heating up. That’s a very good thing, considering that the mechanical closet is adjacent to the owner’s home office.

As working from home in the Rocky Mountains becomes more popular, the mechanical contractors who are best suited to provide the right solutions will benefit while towns in the western U.S. grow.

Dan Vastyan, a journalist whose work focuses on the plumbing and mechanical, HVAC, geothermal, solar and radiant heat industries, is a writer and account manager for Common Ground, a trade communications firm based in Manheim, Pa. He can be reached at 717-587-9595, or cground2@ptd.net.

UV-C Disinfection in Commercial HVAC Systems: COVID-19 and Beyond

Manufacturers Expect Some Changes to Last for Residential HVAC