She brings the back office know-how, he brings decades of installation experience

David Postell started installing air conditioners in 2003, after his uncle brought him into the business. He eventually ran his own business and was subcontracting for larger firms in the Charleston, South Carolina, area. That was in 2008. Postell gave up his business to go work full-time for one of these firms. There he became installation manager and met his wife, Stephanie. The two shared a dream of starting a business, which they did. They leased a building, hired a dispatcher, and launched Hero Heating and Air.

That was at the beginning of March. A few weeks later, they let go of their dispatcher and got out of their lease. In May, another contractor sold the Postells his residential business. David Postell spent almost every day in June installing air conditioners.

Stephanie Webb Postell took a different path into the HVAC business. Like her husband, she grew up in Charleston. Stephanie Postell started out as a kindergarten teacher, then became a stay-at-home mom. After a few years, she turned a side business selling purses and jewelry into a store. She went into marketing after selling the store and went to work for an HVAC contractor in 2012, where she eventually rose to operations manager.

Stephanie Postell decided it was time to move on last year. She and David knew they wanted to start their own HVAC business, and they wanted to get married. They wed on Feb. 15, with plans to open Hero after returning from their honeymoon. While they sat on the beach in Mexico, Stephanie Postell noticed a lot of people wearing masks.

A Chance for Rapid Growth

The Postells opened their doors on March 3. Two weeks later, they closed them and started working out of their home. Hero Heating and Air kept going, though, and in May they had the chance to buy the residential business of Ocean Air, another HVAC contractor. Stephanie Postell said the owner wanted to focus on his commercial business. 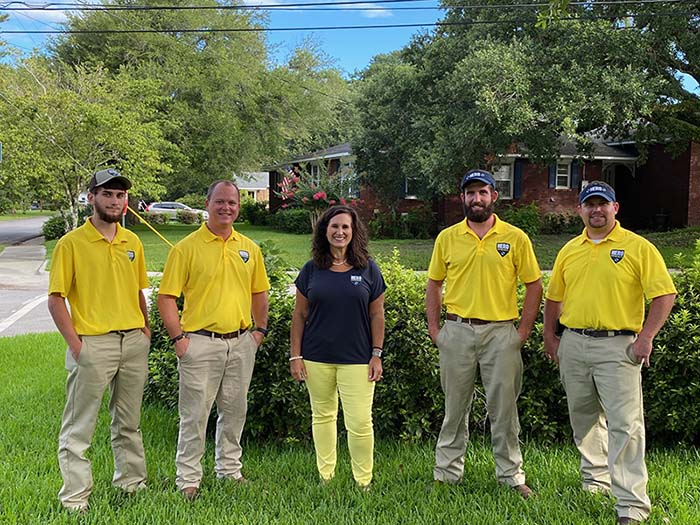 ALL IN THE FAMILY: David, second from left, and Stephanie Postell started Hero Heating and Air a month after their wedding. In the past six months, they added Aaron Postell, far left, David’s son, and Cody and Kevin Burbage, David’s nephews, to the field staff.

The deal came with an office, more than 200 service contracts, and dispatcher Debbie Gibney. Stephanie Postell said Gibney might be worth the most, as she was the one customers dealt with on a regular basis. Gibney had spent a few years working at Ocean Air, and she said any change makes a person hesitant. But she quickly found she fit in at Hero.

“Once I spoke with Stephanie, I was extremely excited to come work for Stephanie and David,” Gibney said.

Gibney said all the customers embraced the change as well, once they get the service. She said the Postells set a high standard for how to treat customers.

Adding Ocean Air’s business allowed the Postells to hire David’s nephews, Kevin and Cody Burbage, as service technicians. All four Postells worked together at their last contractor. David Postell brought the two into the trade, just as his uncle had done for him. David’s son, Aaron, also joined the company this summer, helping his dad with installations. Aaron Postell plans on staying with Hero and working toward his licensing.

David Postell needed the help. He has done 60 installs since Hero launched in March. At first, people were hesitant about letting someone into their homes to work on the air conditioning. 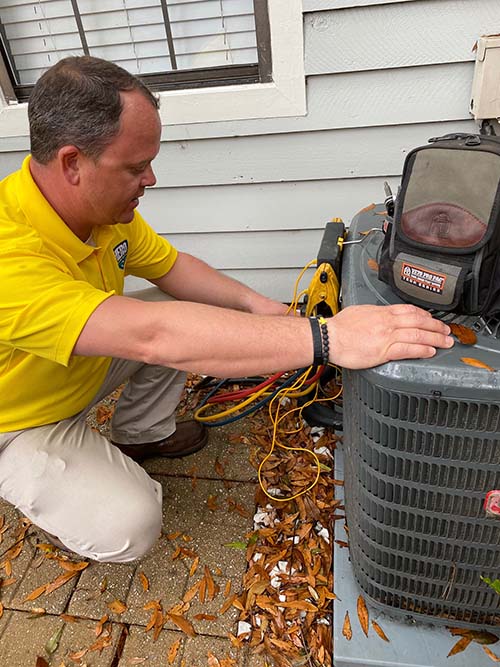 INSTALLING: David Postell keeps busy with installations this summer. Even after nearly two decades, he said he never sees a time when he doesn’t spend at least some time in the field.

“Once the heat hit, they were ready,” Stephanie Postell said.

People have been home more, so they want to improve their comfort level, she said. Her staff take the necessary precautions to protect themselves and the homeowners. That said, Stephanie Postell does warn them that when the techs are alone in a 150-degree attic, the masks will likely come off.

She said Hero’s advantage over other HVAC start-ups comes from a combination of David Postell’s technical skills and her own business experience. Many companies consist only of a technician who decides to go off on his own.

“Sometimes that works out great, sometimes it doesn’t,” Stephanie Postell said. “Usually it doesn’t, because they lack the business knowledge to run the company properly.”

Stephanie Postell is putting her marketing experience to work in many ways to ensure the growth she expects. Much of the marketing revolves around the company’s name. The Postells want to be heroes to their customers, and at the same time, they want those customers to know they are their heroes. Stephanie Postell said they also want to give back to the heroes in the community and plan on making that the basis for giving back.

The firm had some luck in securing marketing pieces. The phone number, 620-HERO, was available when they started. Then a local TV station contacted them about sponsoring its “Everyday Heroes” segment. There have also been some marketing setbacks. Stephanie Postell said much of their original plan consisted of a presence at every festival and parade in their service area. The best they managed this year was a sponsorship at a “Safe Sounds” concert at a local distillery, where the Postells and all other attendees stayed in 10-foot-by-10-foot square while they listened to music.

Some of Stephanie Postell’s best marketing comes from aggressively pursuing leads on social media. One Saturday in July, she was riding along with David Postell on a call when she saw a Facebook post from someone who lost their a/c. She responded right away, the Postells went there that day, and the homeowner had a new unit that Tuesday.

Spending Saturdays Together in the Field

Marketing helps grow a business, but results are the real driver. That’s where David Postell’s years of experience comes into play. Hero can take on a lot of work with a limited staff because of his speed in changing out units. For David Postell, that’s a big part of who he is.

“I don’t think I’ll ever get to the point where I’m completely out of the field,” he said.

Stephanie Postell always went out in the field, even at her old job. She wants to understand what her techs experience. She also wants them to understand the customer’s point of view, especially that of the women who make up three-quarters of the people who answer the door.

One of Stephanie Postell’s goal is to bring more women into the HVAC business, especially as technicians. She knows attracting techs of both sexes will be crucial in growing Hero’s business. Stephanie Postell wants to make Hero known as the best place to work. The firm offers health insurance, paid time off, and a 401K, and she is working on adding dental and vision insurance.

The plans for Hero also include adding plumbing and electrical down the line. For now, the Postells focus their business mostly on the residential market with some light commercial. Charleston is a competitive market, and they know they need to stand out from the competition.

“As a company, it’s knowing what you’re good at and staying away from what you’re not,” Stephanie Postell said.