The big debate in the HVACR industry right now is which refrigerant(s) will be chosen to replace R-410A in many types of comfort cooling equipment. Countries around the globe are already phasing down HFCs, and various states in the U.S. are passing legislation that would also minimize the use of these high-GWP refrigerants. California has been the leader of this movement, proposing a GWP limit of 750 for all new stationary air conditioning systems (residential and commercial) starting Jan. 1, 2023.

As a result, OEMs have been exploring lower-GWP alternatives to R-410A for years, and R-454B and R-32 have emerged as the top contenders. (R-32 was covered in a previous article.) However, both are A2L refrigerants, meaning that they are mildly flammable, and model codes do not allow their use in many types of cooling equipment. That is not stopping some states, which have already amended their laws — or are looking to do so in the near future — in order to allow the use of A2L refrigerants.

The main reasons why R-454B, which is manufactured by Chemours under the trade name Opteon™ XL41, has become one of the leading contenders to replace R-410A is that it closely matches the properties and performance of R-410A while having a GWP under 500.

“R-454B offers comparable capacity with improved energy efficiency up to 5 percent, depending on system design and conditions,” said Joseph Martinko, business director of Americas at Chemours. “Its compressor discharge temperatures are a much closer match to R-410A compared to R-32, and it is miscible and compatible with existing POE lubricants. For these reasons, along with the similar pressures and overall operating envelope, we believe that Opteon XL41 is more design compatible with existing R-410A equipment designs.”

Last year, Carrier announced that it had chosen R-454B as its primary lower-GWP solution to replace R-410A in all of its ducted residential and light commercial packaged solutions sold in North America. One of the main reasons for making this choice is that R-454B has the lowest practical GWP for a typical residential system, with a GWP of 465, while R-32 has a GWP of 675, and R-410A has a GWP of 2,088, said Bob Swilik, director of product management at Carrier.

“R-454B and R-32 are very similar in performance to R-410A,” said Swilik. “R-454B has a slightly lower capacity with slightly higher efficiency than R-410A. Discharge pressures are lower than R-410A, while discharge temperatures are higher, but this increase is not great enough to pose a concern. Because it operates at temperatures and pressures similar to those of R-410A, switching to R-454B should be a relatively easy transition. Carrier has done extensive modeling and testing with our compressor suppliers of refrigerant usage under the refrigerant regulations, and we think R-454B, with its low GWP, could be the long-term solution.”

In response to OEMs’ decisions to move to lower-GWP refrigerants, Emerson has expanded its compressor portfolio to include a full range of optimized products and technologies for both R-32 and R-454B. The company believes that R-454B has the ability to deliver similar capacity at equal and/or better efficiency levels when equipment and components are optimized for use with the fluid, said Shane Angle, vice president of sales and technical services at Emerson Air Conditioning.

“R-454B allows manufacturers to design systems that are fairly similar to an R-410A system,” he said. “In addition, R-454B has the lowest global warming potential of the R-410A alternatives being discussed today, and equipment designed for R-454B requires less charge than today’s R-410A systems.”

In order to work safely with A2L refrigerants such as R-454B, technicians will require training, as well as some new tools and test instruments. For service, standard equipment will still be used, noted Swilik, but tools will have to be certified for use with A2L refrigerants, such as recovery machines. 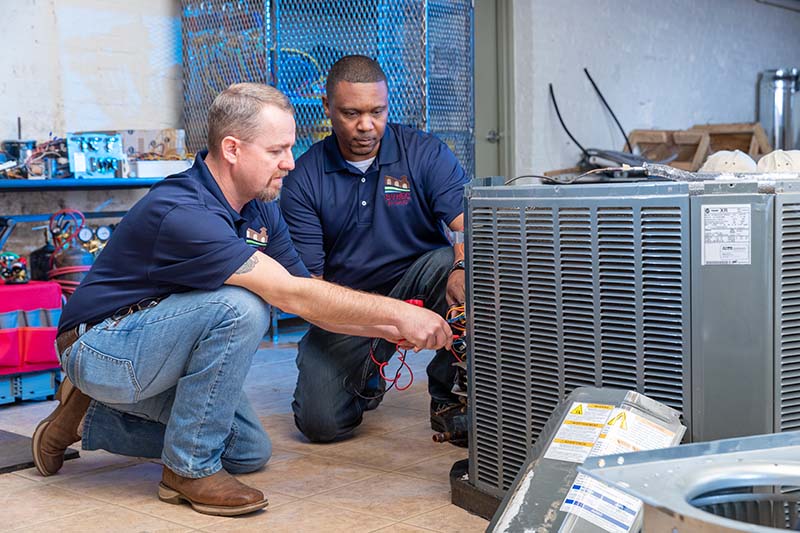 NEW TOOLS: It is likely that technicians will need some new equipment, such as gauge sets, recovery machines, and leak detectors in order to work with new refrigerants such as R-454B. 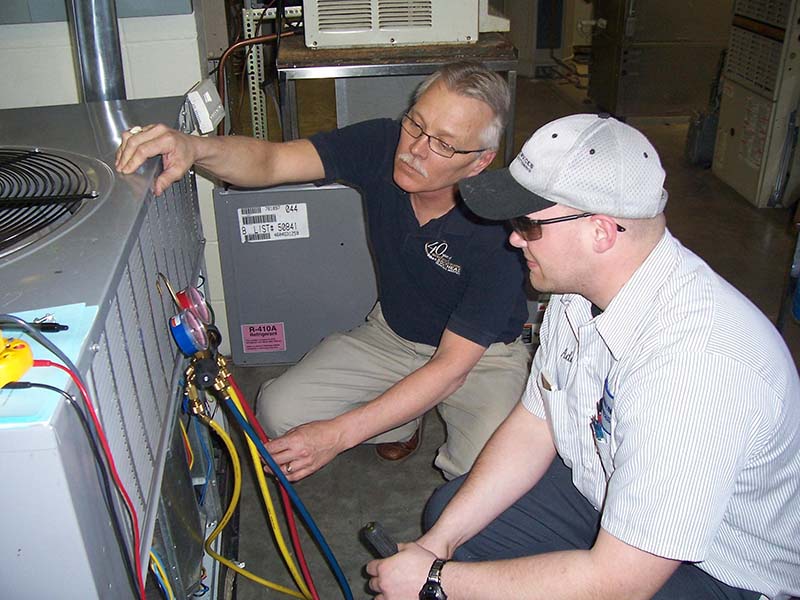 CRITICAL TRAINING: Training will be critical in the transition to A2Ls from R-410A, and technicians will need to understand that while R-454B is not a highly flammable refrigerant, there are key aspects to understand.

“A2L refrigerant cylinders will have left-hand threads and new color coding with a red top to indicate flammable refrigerants,” he said. “At this point, the new standards do not require left-hand threads on the unit fitting, but there is some discussion to align with the refrigerant cylinder change. In addition, the North American Technician Excellence (NATE) certification examination has been updated to account for the new refrigerants and will be released soon as part of efforts underway by the AHRI to begin training the industry on the new refrigerants.” 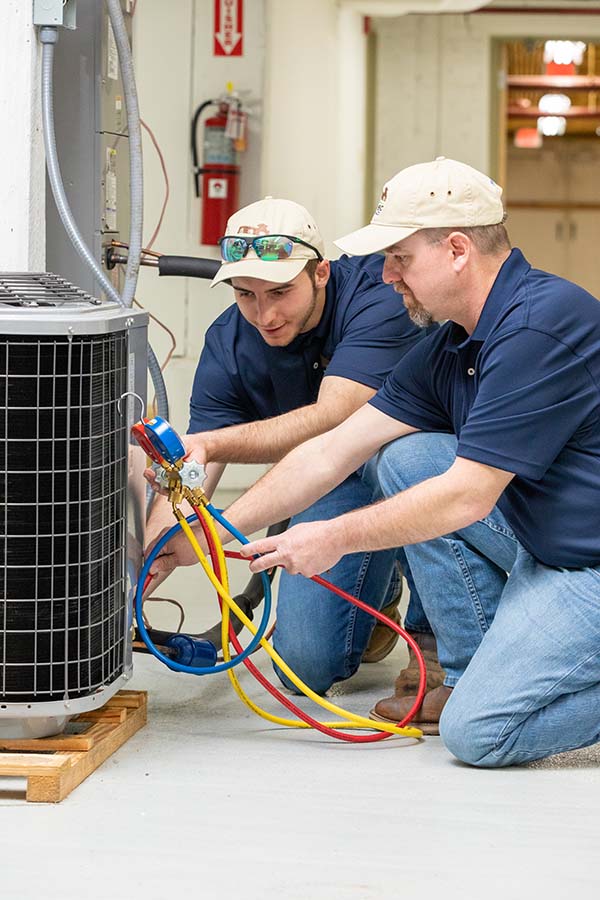 TASK FORCE: AHRI is leading a Safe Refrigerant Transition Task Force to develop safety training, as well as requirements for the proper installation and maintenance of A2L equipment.

Indeed, AHRI is leading a Safe Refrigerant Transition Task Force to work with code bodies to develop requirements for A2L refrigerants that include:

The ESCO Group, which offers educational opportunities to improve the technical competency of the HVACR industry, along with its partners at the United Association (UA) and Mechanical Service Contractors of America (MSCA), is also developing a curriculum, certification exam, and instructional tools for educating and training contractors, technicians, trade school students, and instructors. The program will be available on its elearning site, along with other mainstay programs such as the 608 and R-410A certification programs.

Training will be critical in the transition to A2Ls, said Martinko, and technicians will need to understand that while R-454B is not a highly flammable refrigerant like R-290 (propane), there are key aspects to understand.

“For example, disposable cylinders will have a resettable relief valve, some tools will need to be deemed acceptable for A2L use, and A2L refrigerants will not be drop-in replacements in systems designed for another safety classification,” he said.

Before working with A2L refrigerants, technicians will be required to attend industry-sanctioned training sessions, and Carrier is also creating a curriculum for its own technicians, said Swilik.

“We would also recommend contractors have their technicians take the NATE examination for the new A2L, as well as A3 refrigerants, which will be used in some small appliances and refrigeration,” he said. “The first state-approved use of A2L refrigerants will not be until January 1, 2023, in California, so between now and that date there will be significant training and educational work underway. For Carrier products, this will be coordinated through our local distribution offices and our commercial service organizations, so contacting them for possible training is encouraged.”

Most in the HVACR industry are anxious to find out when equipment containing R-454B will be available on the market, but before that can happen, codes need to be updated in order to allow A2L refrigerants to be used in comfort cooling equipment.

The industry was also looking for guidance from the Environmental Protection Agency (EPA), and the agency just recently pre-published its new SNAP [Significant New Alternatives Policy] Rule 23, which would deem R-454B as acceptable “subject to use conditions, for use in residential and light commercial air conditioning and heat pumps end-use for new equipment.”

As for safety standards, ASHRAE Standard 15-2019 and UL 60335-2-40 (third edition) already recognize A2L refrigerants for human comfort applications, but the uniform and international codes do not. Given that the 2021 code cycle has closed, and the new code development cycle for 2024 is now underway, some states are looking to amend their state building codes to allow the use of A2L refrigerants. Washington State, for example, has already done this, and California is looking to do the same.

Manufacturers such as Carrier are not waiting, and they are in the process of developing, qualifying, and certifying their new products to meet the new standards going into effect in California on Jan. 1, 2023. According to Swilik, the company will begin transitioning to R-454B when the appropriate safety standards and building codes permit A2Ls to be installed in California.

“To be prepared for California’s HFC regulation, OEMs must make their selection of an R-410A alternative and begin qualification in the very near term,” said Martinko. “Of the options available that are close to the performance of R-410A, R-454B provides the longest-term viability in the face of existing or upcoming HFC phase-down regulations. In a market that could be regulated on a CO2-equivalent basis, GWP matters. R-32 has higher GWP, so that could lead to higher costs over time on a CO2 ton basis. Our solution, R-454B, has been chosen because it provides a solid foundation, both financially and environmentally, making it the optimal choice.”

Swilik agrees, noting that R-32 has a significantly higher GWP and would most likely need to be phased out itself as GWP levels are lowered over time.

“After extensive tests and evaluation, R-454B was selected as the best solution to minimize environmental impact and energy use, while improving performance, safety, and longevity,” he said. “We’ve worked closely with regulators and research groups to develop standards, codes, and regulations that will help ensure the safe use of R-454B. We’ve also carefully studied all alternatives and chosen the most viable refrigerant with the lowest environmental impact for this product category. We believe that R-454B, with its low GWP, could be the long-term solution.”