Buying a new cooling system is a rare occurrence for most homeowners, and the majority know next to nothing about how their central air-source heat pump or air conditioner should be installed. That’s why they usually put their faith in their contractor to not only recommend the best equipment for their home, but to install it properly, too, so that they obtain the comfort and energy efficiency they were promised.

Unfortunately, some homeowners may not get what they paid for because their system was not installed properly. That can be due to honest mistakes, or it may be because the contractor cut corners in order to keep the initial cost of the system low. Either way, the customer ends up unhappy, and they often end up spending even more money to have another contractor correct the problem. The best solution for all involved is to correctly install the system in the first place.

Homeowners who are unhappy with how their cooling system is performing often call Verlon Wulf, president (and self-described chief cat) of Carolina Cool Inc. in Surfside Beach, South Carolina, to fix their problems. These complaints come from owners of both new and older homes, and usually involve poor air circulation, hot and cold spots, excessive energy costs, humidity problems, and/or no cooling. Many problems are directly attributable to poor ductwork design, dryer vent issues, high static pressure, and/or faulty zone damper operation. And for the most part, high-efficiency equipment is involved.

“Homeowners are buying high-efficiency systems, but they often shop for the lowest price,” said Wulf. “But changing a system that is 10-plus years old to a high-efficiency one that is extremely dependent on proper duct sizing and static pressure simply doesn’t happen every time, especially when a homeowner is concentrating on price. Most times, ductwork modifications are required, but a different company will give a much lower quote without any of the necessary ductwork changes to ensure proper ventilation.”

High-efficiency system installations also require more time because, in addition to making sure the ductwork is properly sized, technicians must perform a static pressure test, program increasingly complicated thermostats, and set up Wi-Fi thermostats to communicate with the customer’s phone, said Wulf. And the price has to be competitive, although customers should understand that a poorly installed system may cost more to fix in the long run.

“In one recent instance, the home had two systems that were only three years old, but the homeowners complained of poor air circulation and areas of mold growth, in addition to constant breakdowns,” said Wulf. “In the end, we completely changed all the ductwork, fixed the zone system, relocated the air purifiers, and cleaned everything up for a total cost of $15,620.”

Rob Minnick, president and CEO of Minnick’s HVAC, Plumbing & Insulation, Laurel, Maryland, also fields his fair share of calls from homeowners who have cooling systems that are not properly installed, and he feels the problem is getting worse.

“More and more people think they can just go in and change boxes, but that’s not how it works,” he said. “Especially with high-efficiency units. You can’t put a NASCAR engine into a 1970s Pinto and expect it to run a NASCAR race. A contractor may install a new high-efficiency unit, but if no modifications are made to the rest of the system, including the ductwork, registers and grilles, dampers, etc., the performance is probably not going to be there.”

There really is no excuse for a poor installation because most manufacturers, as well as associations such as ACCA, provide plenty of information about how to do the job correctly. In fact, ACCA offers free guidance through its comprehensive Standard 5, “HVAC Quality Installation Specification,” as well as Standard 9, “HVAC Quality Installation Verification Protocols,” which contains a handy installation checklist. So why don’t more contractors use these materials to ensure the system is installed correctly?

“They say they don’t have the time,” said Minnick. 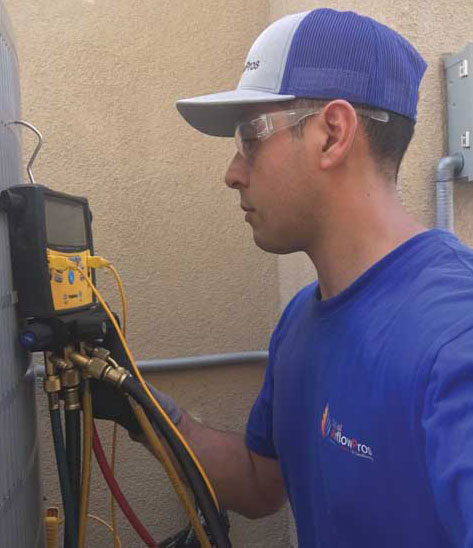 DO YOUR RESEARCH: When looking for a contractor, Cody Novini recommends that homeowners research a company’s website, as well as read all the online reviews and the company’s responses.

What is likely the case, though, is that contractors don’t make the time. Homeowners are often price sensitive when it comes to purchasing a new cooling system, so some contractors cut corners to keep the initial bid low. There is a long list of potential shortcuts, but they can include improperly sized equipment, inadequate airflow, improper brazing and vacuum practices, and improper condensate drainage, said Cody Novini, owner of SoCal Airflow Pros in Orange County, California.

“Cheap contractors often charge 20-50 percent less than what it costs to install the system correctly,” he said, “although it usually ends up costing far more than the original price to have everything redone. It is not uncommon for us to have to completely demo another company’s work and start all over. Of course, there is no refund for the homeowner from the other contractor.”

Most of the installation mistakes that Rich Morgan, owner of Magic Touch Mechanical in Mesa, Arizona, sees involve improper airflow, which is usually attributed to poorly designed and installed plenums, transitions, and takeoffs. As a result, many of these systems have extremely high static pressure. Other common mistakes include poor evacuation, charging, and line set flushing procedures; over- and undersized systems; improper condensate and secondary drainage; and poor (if any) duct sealing. 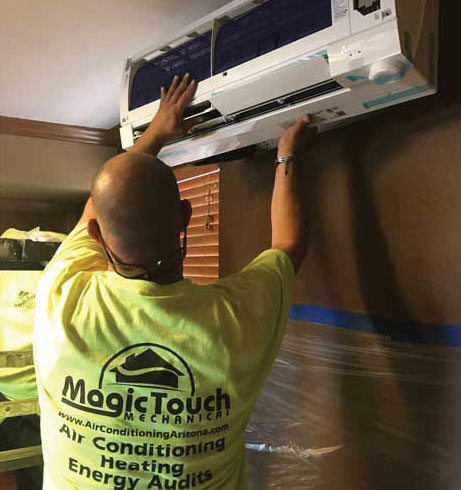 NOT ALWAYS A QUICK FIX: At Magic Touch Mechanical, technicians are often called upon to fix equipment that has been installed improperly. Some units can be repaired within a few hours, while others may need to be completely uninstalled and then reinstalled.

As for shortcuts, Morgan said common ones are “end-capping,” rather than installing plenums, or else reusing old plenums and then “blank-plating” a portion of the unit’s openings.

“Another issue we see is stuffing a unit that’s dimensionally too large for a space in there anyway, as opposed to relocating it and rerouting ductwork, electrical, gas, drain lines, etc., as needed,” he said. “We’ve seen some that were literally unserviceable, because access panels couldn’t even be removed. It’s also quite common to find units that are oversized, short-cycling, and starving for return air, because nobody performed a load calculation.”

Typical shortcuts that Wulf sees include not enough return air, leaky ductwork, thermostats not programmed correctly, no balance dampers (resulting in hot or cold areas), improper refrigerant charge, and no filter driers. While he notes that just about anything can be fixed if there is enough money, there is one problem that cannot be repaired.

“If the installer didn’t flush the refrigerant lines, didn’t pull the proper vacuum, and didn’t install a filter-drier, the system is contaminated, which can lead to premature compressor failure,” he said. “Once a system is dirty, it’s always dirty, which can cause a lot of problems down the road.”

That is why quality contractors make sure the cooling system is installed correctly in the first place.

“Do the load calculation, and verify the ductwork is sized properly,” said Minnick. “Take airflow readings throughout the house. Basically, just follow ACCA’s Standard 5, and then commission the system at the end of the job. A lot of companies put in two or three systems a day. But to install a gas furnace and air conditioner with some minor ductwork modifications is going to take at least 10 hours, if it’s done properly. Sometimes even longer than that. That’s why if homeowners are looking for the cheapest price, that’s never going to be me. My price is always roughly double what other contractors are charging, but we do everything right the first time.”

Homeowners typically get several quotes before buying a cooling system, but that may cause more confusion in the long run, said Cody Novini.

“Many people have had three quotes for a project and still got ripped off or received poor installations,” he said. “If homeowners would spend more time researching the company, they would save time and headaches.”

To that end, Novini recommends that homeowners look at a company’s website, as well as read all the online reviews – and the company’s responses -- on Yelp, Google, Facebook, Better Business Bureau, Angie’s List, etc. And homeowners should know that just because contractors have five stars does not mean they are five-star installers.

“Many contractors get a five-star rating just for being nice and providing a minor fix, or for being the cheapest,” he said. “Even though it’s time consuming, homeowners need to read the content of the reviews, because they are powerful.”

If a homeowner still plans to solicit other quotes, Verlon Wulf suggests contractors advise their customers to ask the following questions of each company bidding on the job: