This website requires certain cookies to work and uses other cookies to help you have the best experience. By visiting this website, certain cookies have already been set, which you may delete and block. By closing this message or continuing to use our site, you agree to the use of cookies. Visit our updated privacy and cookie policy to learn more.
Home » Contractors Discuss the State of HVAC System Odor Complaints
HVAC Residential MarketIndoor Air QualityResidential Indoor Air Quality

Dirty sock syndrome: Has it become a problem of the past?

It’s not hard to remember the smell of corn chips and sweat emanating from the high school gym lockers. Dirty socks and uniforms that hadn’t seen the inside of a washer for months caused such an unforgettable and rank odor. Some years back, though, HVAC systems rivaled the locker room with their own pungent odor issues. Dubbed dirty sock syndrome, the inconsistent and repulsive problem was eventually narrowed down to a bacteria primarily found on system coils. Time has since revealed more sources of system odors, along with some solutions that allow technicians to abate dirty sock syndrome and all of the other odor culprits, too.

IT’S NOT JUST THE COILS’ FAULT

Wherever water accumulates, there is a chance for odor. This applies to any equipment in the HVAC system, including cooling coils as well as poorly insulated surfaces that come in contact with inadequately dehumidified air, said Elliott Horner, ASHRAE member and principal scientist at UL Environment.

“This smell remains an issue with poorly maintained HVAC equipment or where cooling equipment is not properly sized for the load,” he explained. “Another situation that can lead to this issue is one in which the fan is left in the ‘on’ position and the coils are not energized. This distributes air, which has not been properly conditioned first, into the occupied space.”

According to Horner and his colleague Scott Laughlin, product manager, UL Environment, addressing the smell is often achieved by modifying the HVAC system to not allow the accumulation of moisture or to provide for proper drainage of unavoidable moisture. Both agreed that there are other sources, however, that influence HVAC system smells.

“Sources from the occupied space which are recirculated through the ventilation system, such as cleaning chemicals, household dust, and outdoor air sources — where applicable — are other factors that can affect the odor coming from an HVAC system,” said Laughlin.

Customer complaints about system odor are hit or miss and happen sporadically throughout the year.

“About a dozen times a year, we get a call from a customer thinking they have dirty sock syndrome,” said Martin Hoover, president of Empire Heating and Air Conditioning, Decatur, Georgia. “Most are something else, but we do average about two real cases a year.” 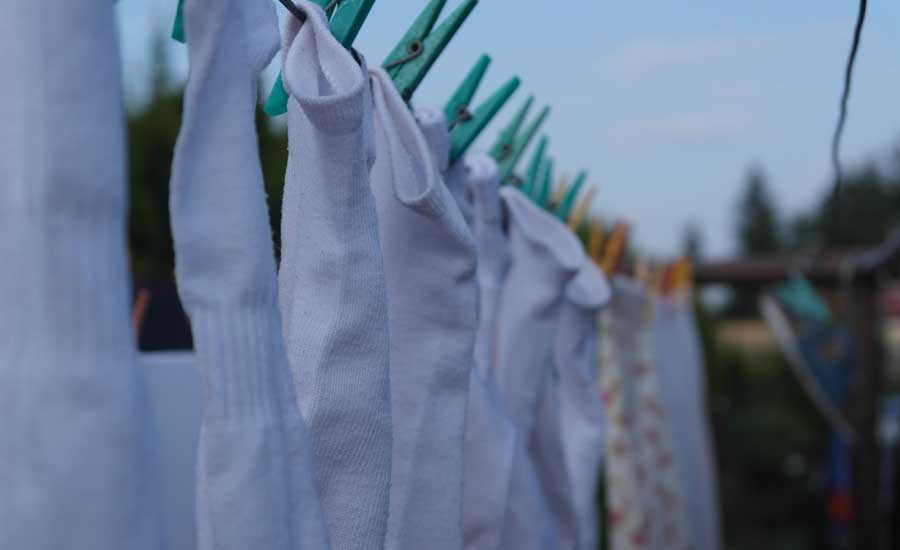 CLEANING HELPS: If the system smell is related to dirty coils, they may just be in need of a deep clean in order to shed odors. Many contractors use UV lights and coil cleaners to accomplish this.

Hoover spoke of a case where a heat pump installed in 2001 was replaced in 2018. The customer had no smell issues with the 2001 system, but the day after installing the replacement, the odor started.

“After a couple of service calls and installing a UV light with PCO [photocatalytic oxidation], we replaced the coil with an epoxy-coated one, and the customer had no issues after that,” he said. “I have read about, but have not personally tried, installing the same coil that had dirty sock syndrome in one house in another, and it does not recur. I never wanted to take the chance, so we disposed of the original coil.”

Dirty sock syndrome is not as common as it once was now that manufacturers are coating coils to help prevent the issue, at least not according to Aaron Rice, president of A & A Precision Heating, Cooling & Refrigeration in Evansville, Indiana.

“We receive complaints regarding smell maybe three to four times a year on older coils,” he said. “When we receive a complaint, we pull the evaporator coil and clean it. If need be, we install a UV light to kill the mold and any bacteria that has built up on the evaporator coil.”

The company will also verify that the system is sized properly for the heating and cooling loads.

Addressing IAQ can not only help contractors keep the HVAC system smell-free, but it can also improve their bottom lines.

The unpredictability of dirty sock syndrome makes it a challenge to prevent. Mitigating factors like improperly controlled moisture can help lessen the chances of dirty sock syndrome, but odors from IAQ problems can still cause issues for the homeowner. Addressing IAQ can not only help contractors keep the HVAC system smell-free, but it can also improve their bottom lines. 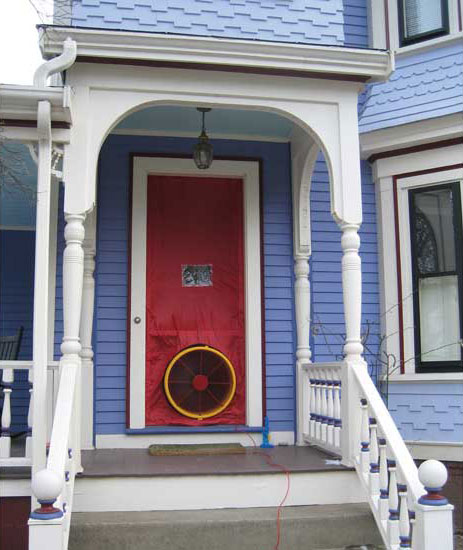 IAQ IMPACTS ODOR: Testing the home’s air tightness with a blower door, like this one, helps technicians hone in on the source of non-coil based IAQ odors. PHOTO COURTESY OF FLICKR FLICKR http://bit.ly/2YvtZCz

John Boylan, general manager of Lakeside Service Co. Inc. in Brighton, Michigan, is a home-performance contractor. When he gets complaints about smell in the home, Boylan sends out an estimator with building science experience to test the home’s air tightness with a blower door. This helps the estimator narrow down and possibly locate the source of the smell when it is not based in the coil, like with dirty sock syndrome.

“Depending on the findings, we typically recommend controlled mechanical ventilation like an ERV [energy recovery ventilator] or an HRV [heat recovery ventilator],” Boylan said. “Sometimes, it’s as simple as installing an exhaust fan that is properly ducted and sized.”

Boylan and the staff at Lakeside Service also educate their customers and offer IAQ products that neutralize odors without producing ozone.

WHEN IT IS DIRTY SOCK SYNDROME

Despite it being less common, dirty sock syndrome still exists. Butch Welsch, owner of Welsch Heating & Cooling in St. Louis, has experienced the “sock syndrome” smell himself a handful of times.

“Generally, the sock syndrome or smells occur from the A-coil in older units,” he said. “We have not as of yet determined that there is anything that can be done on an original installation to eliminate future sock syndrome issues.”

Welsch agreed that UV lights installed in both the return and the supply can be effective, and so can replacing the coil. When it comes to cleaning the coil, he explained that older, dirty coils may just be in need of a deep clean in order to shed odors. He suggests using specifically designed coil cleaners or water/bleach mixes as cleaning solutions.

“When dirt and debris build up on the coil and the a/c is running, the coil struggles to shed the water,” he said. “Generally, after cleaning the coil and cycling the system a few times, it does the trick.”