At least that’s what company founder and owner, Glenn Moore, had to say when describing the products he had on display at this year’s AHR Expo in Atlanta.

As a small- to medium-sized company, it’s important for Braeburn to target the demographic that will give it the most bang for its buck — the average consumer.

“How many people can afford to put a $300 to $500 internet-capable thermostat on their wall?” Moore asked.

His answer: Not many.

“The No. 1 sign to that is all the rebate programs,” Moore noted. “I’m a marketing and sales guy, and what you’re doing when you start giving $100 away is, you’re telling people that no one wants to pay your original price.

“But at the end of the day, when you’re at the branch level and seeing what sells, cost is a big factor,” he continued. “We went through the Great Recession — it was like a koi pond with only 3 inches of water — we’re all floppin’ around trying to get business. And people didn’t want to upgrade their systems; they didn’t even want to repair them. No one was buying new equipment.”

“A lot less people are connected than you think,” Moore said.

What’s happening is, contractors are coming in with a quote, and it’s an extra $400 or so to install a smart stat, but only $100 for a regular one.

“So they say, ‘Just give me the one that turns it up and down,’” Moore said. “So [I asked myself], how can I convert the ordinary thermostat purchaser to a smart, Wi-Fi stat purchaser? The answer is, I gotta bring the price down.”

“But when you look at all the features of Wi-Fi thermostats, remote connectivity is the only one that really stands out,” Moore said.

What he’s done is, he’s taken the regular thermostats that have been selling well for the company already and added Wi-Fi capability to them. 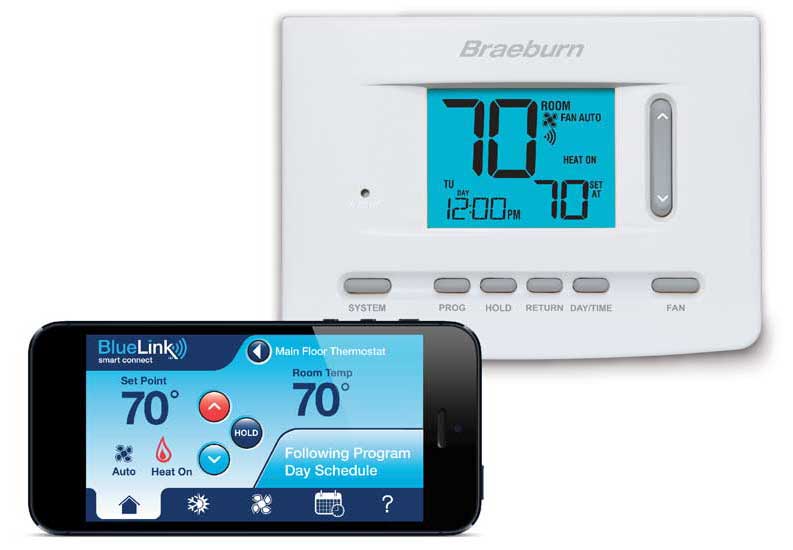 ONLY FOUR WIRES: According to Glenn Moore, founder and owner of Braeburn, the biggest installation obstacle when it comes to thermostats is that most homes in the U.S. still don’t have a common wire. That’s why the model 7205 stat requires only four wires to connect.

Those are the three trends Braeburn targeted when the company designed its newest thermostat, the BlueLink Model 7205 Smart Wi-Fi Universal Thermostat, designed for residential, light commercial, and commercial applications. The multistage model is compatible with conventional and heat pump systems up to 3H/2C. Homeowners or building managers can use the free BlueLink Smart Connect app for remote control via smartphones, tablets, or PCs. Other features include the SmartLimit™ temperature limits, separate user and installer lock modes, and four-wire compatibility.

“That’s the biggest installation obstacle,” Moore said. “Most homes in the U.S. still don’t have a common wire, a fifth wire.”

Though the product was released last year, the company reintroduced all of its smart thermostats at this year’s expo, as it awaits the launch of its newest model later this year, which will offer a suite of new features.

“We [will] add the OpenADR, which is a California requirement for commercial,” Moore said. “The California utilities — their cloud and our cloud are compatible — so when you install it out there, it’s OpenADR compatible, so you can go on their energy site. We will have that in about mid-year.

Designed for residential or light commercial applications, both models are compatible with virtually all low-voltage thermostats and dampers. Backlit displays show systems calls and statuses and flexible staging can be controlled by panel or thermostats. Both panels are dual fuel compatible when using a Braeburn wired outdoor remote sensor. They can be used with conventional or heat pump systems up to 2H/1C (Series 2) or 3H/2C (Series 3).

“We are the value alternative,” said Moore.