This website requires certain cookies to work and uses other cookies to help you have the best experience. By visiting this website, certain cookies have already been set, which you may delete and block. By closing this message or continuing to use our site, you agree to the use of cookies. Visit our updated privacy and cookie policy to learn more.
Home » Tecumseh’s on the Front Line, Fighting the War on Refrigerants
HVAC Commercial MarketRefrigerationCondensing UnitsRefrigerants

Tecumseh’s on the Front Line, Fighting the War on Refrigerants

ATLANTA — In Greek mythology, Argus was a son of Zeus. Having the king of the gods up on Mount Olympus for a dad probably raised the bar in terms of expectations. Fortunately, Tecumseh seemed comfortable with that kind of lofty namesake for its biggest launch at this year’s AHR Expo, the ARGUS condensing unit platform.

According to Hiroshi Saito, the company’s director of global marketing, part of the motivation that led to the ARGUS line of air-cooled, low- and medium-temperature condensing units has been the new refrigerant-related regulations coming in 2020. The world of refrigerants is fairly fraught with uncertainty these days, but Tecumseh sees this release as a way to give customers some confidence that they will be in good shape regardless.

ARGUS has been optimized around HFO-blend refrigerants and exceeds the U.S. Department of Energy’s Annual Walk-In Energy Factor (AWEF). In fact, the company said the unit can exceed the AWEF requirement by up to 15 percent in the capacity range of ½ to 6 hp. To that end, Tecumseh is enthusiastic about its potential for restaurants, grocery stores, convenience stores, fast-food outlets, and similar retail establishments.

Kit Fransen, director, product management North America, views the combination of reciprocating and scroll compressor technologies as a way to cater to contractor and owner desire for easy serviceability. Three chassis sizes join a simplified layout that Fransen noted will allow access without removing the top of the enclosure. Saito said this particular development was the result of customer feedback about previous equipment. It is not only better for maintenance, he said, but for any eventual replacement.

But in the meantime, LED lights in the service panel itself ease visibility inside. Furthermore, techs can take advantage of a QR code on the inside of the panel service door for quick access to wiring diagrams, performance data, parts lists, and the Tecumseh technical service team.

The ARGUS release also reflects some conservation on the materials side. The design reduces braze joints by 25 percent, fasteners (on average) by 25 percent, and overall product weight by 20 percent. Those wanting to max out the available options can select an electronically commutated (EC) fan motor, the microchannel coils, an air/electric defrost timer, and a heated insulated receiver.

Even though the ARGUS release wasn’t quite to market at the time of the AHR Expo — it will be, according to the company, by the time this issue is published — it was already creating a ripple effect elsewhere in Tecumseh’s offerings. The manufacturer plans to unveil unit coolers that match ARGUS, and they are slated for official release in April. These unit coolers will also meet AWEF standards, the company said. 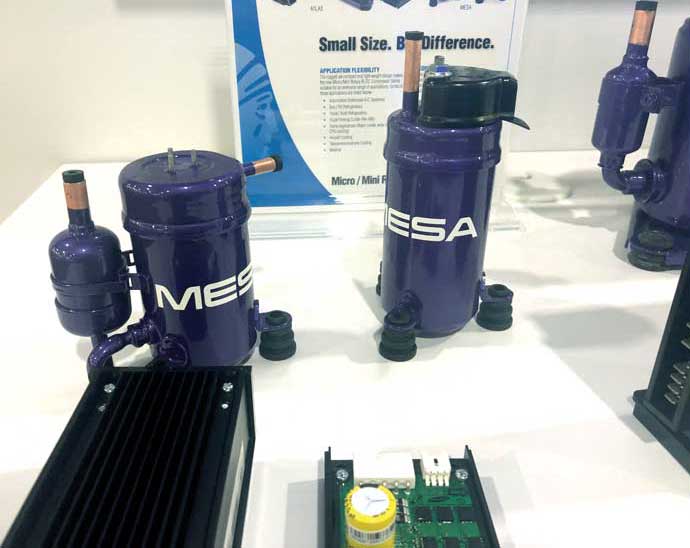 BATTLING THE HEAT: Mesa variable-speed compressors, part of the company’s Masterflux options, are so travel-sized and tough that they can serve in personal cooling systems for tank personnel.

Sporting a royal purple that might appeal to the old Argus, the Masterflux category of micro/mini rotary BLDC compressors looked sharp at the booth. The DC-powered variable-speed compressors composing the Mesa and Atlas series are built to offer a robust design, with an eye toward portable and mobile applications.

They have been suited for heavy-duty trucking, medical, and military settings, among others. In fact, Fransen mentioned that they have seen duty in tanks. The tanks get so hot on the inside that the crew received individual cooling packs, which is where what Tecumseh calls “The Power of Purple” makes its contribution.

Fransen told The NEWS that another point of emphasis for Tecumseh is full systems — self-contained products that OEMs can plug right in. An example of that is the IntelliCOOL™ technology for commercial refrigeration systems.

He discussed how these designs were created around propane. This choice offers a real advantage for end users, he said, in that Tecumseh can charge a unit in its own facility, providing more convenience and less stress for users. For contractors doing the installation, it means less potential for refrigerant complications, and feedback suggests they like the slide-in nature as well.

In all, the company is funneling its energy into three keys these days. The first is the ARGUS line. Another is the use of variable-speed technology to boost efficiencies wherever practical. Finally, Fransen said, the company wants to draw on its 85 years of experience and accumulated knowledge across many areas to develop its full-system focus. That, he said, will be augmented by meeting directly with customers more often to better understand and react to their priorities.