This website requires certain cookies to work and uses other cookies to help you have the best experience. By visiting this website, certain cookies have already been set, which you may delete and block. By closing this message or continuing to use our site, you agree to the use of cookies. Visit our updated privacy and cookie policy to learn more.
Home » Old Bible College Converts to Youth Camp for Arts and Theater
HVAC Light Commercial MarketHVAC Commercial Market

Following several years of neglect, one of the oldest colleges in Minnesota has metamorphosed into a summer camp for youth. Like the young lives nurtured there throughout the years, the school’s heating system recently received some much needed TLC (tender loving care).

As campus facilities were inspected prior to purchase in April 2014, it was apparent that the old central heating system would require a substantial overhaul.

Owatona, Minnesota-based Pillsbury Baptist Bible College opened its doors to students in 1877. After closing in 2008, the campus sat vacant until Vonda White, an entrepreneur from Florida, purchased the college six years later. 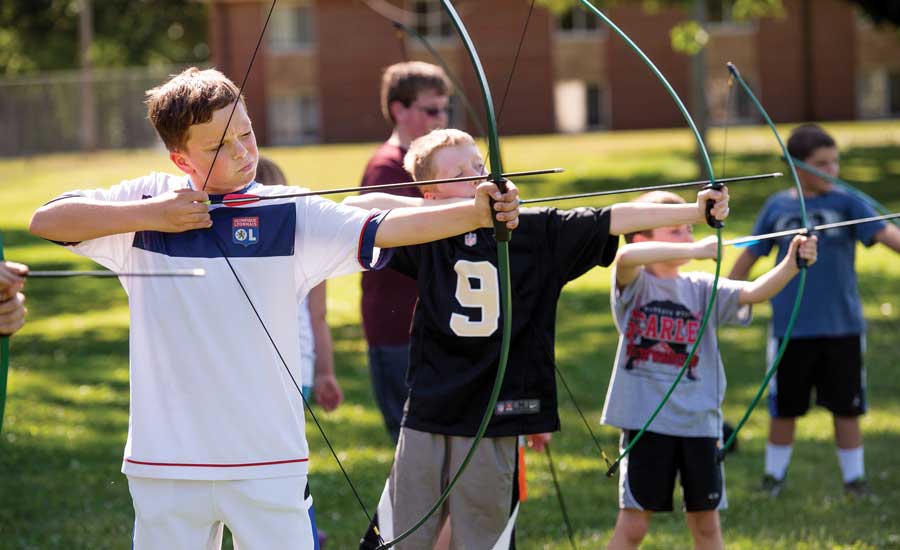 “We get to change the world one kid at a time,” said White. “The impact that we can have on these children is very positive. We transform the lives of kids, and they’ll transform the world.”

The campus is now home to Camp Pillsbury, a year-round camp for kids from all over the world, ages six to 17. The camp offers programs such as circus arts, magic, theater, dance, music, visual and fine arts, equestrian, extreme sports, and more.

Yet, far from just a camp for kids trying their hand at performing arts, it’s also a sleep-away summer camp, a year-round boarding school, an afterschool program, and a nationally accredited private school with an outstanding academic record.

During the summer months, an average of 240 to 260 children attend Camp Pillsbury; more than half of them come from beyond the Midwest, including other countries like France, Brazil, Netherlands, and Spain.

“Pillsbury once had a huge, overworked steam system to heat all buildings on the property. When we first fired it up, steam leaked everywhere; the system was completely shot.”
— Skip Schwartz owner Faribo Plumbing & Heating, Faribault, Minnesota

Overnight program students sleep in campus dormitories. The three dormitories can house up to 850 students, or three students per room.

The initial phase of the revival focused on only five of the campus’ buildings — the ones essential for the camp’s inaugural year. Remaining buildings were renovated during later phases of the campus’ renewal.

Camp Pillsbury managers reached out to Faribault, Minnesota-based Faribo Plumbing & Heating, asking that they assess the need for plumbing, heating, and mechanical system upgrades for the once vacant buildings.

“Pillsbury once had a huge, overworked steam system to heat all buildings on the property,” said Skip Schwartz, owner of Faribo Plumbing & Heating. “When we first fired it up, steam leaked everywhere; the system was completely shot.”

GEYSERS IN THE LAWN

An aerial photo would have been revealing. The extensive, underground steam delivery tunnel system leaked like a sieve. So during the winter months, the grass above the tunnels was moist and green. Steam trickled upward from the soil, as if from subterranean geysers.

“We eliminated the steam system, all of the old piping for it, and the boilers as well,” explained Schwartz. “But we decided to continue using the old steam tunnels to carry city water from the plant to each of the buildings to meet domestic water needs.”

“From the beginning, we recommended taking care of each building’s heat individually, rather than having one giant heating plan for all of the buildings on campus,” Schwartz said. “Not only are the systems customizable for each building, but they’re running at much higher efficiencies as well.” 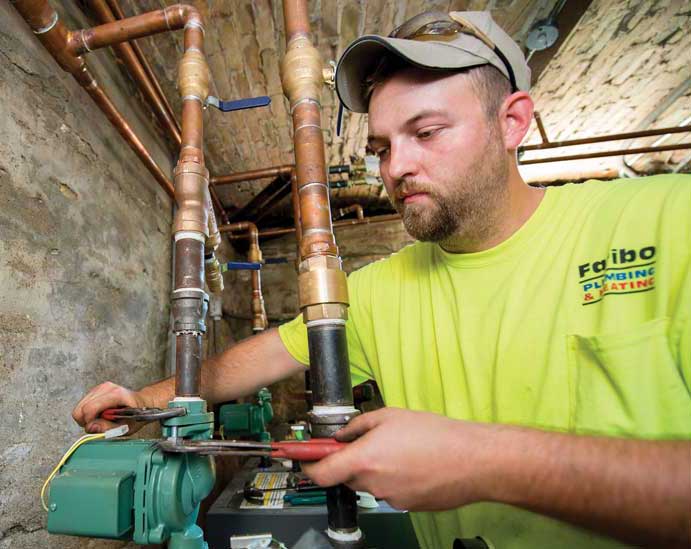 “Now, every building has its own dedicated mechanical system,” said T.J. Dvorak, project manager, Faribo Plumbing. “We installed two Laars NeoTherms in each mechanical room, varying in sizes. We went with two boilers in each location because of the school’s stated desire for full redundancy.”

Replacing the old steam system as the source of heat for the campus are 95 percent efficient Laars NeoTherm natural gas-fired condensing boilers. The systems are direct-vented with sealed combustion, offering a 5:1 turndown.

“All of the Laars boilers have interior and exterior sensors to monitor and control temperatures,” said Schwartz. “These boilers come with the controls already built in; we needed only to add the sensors. 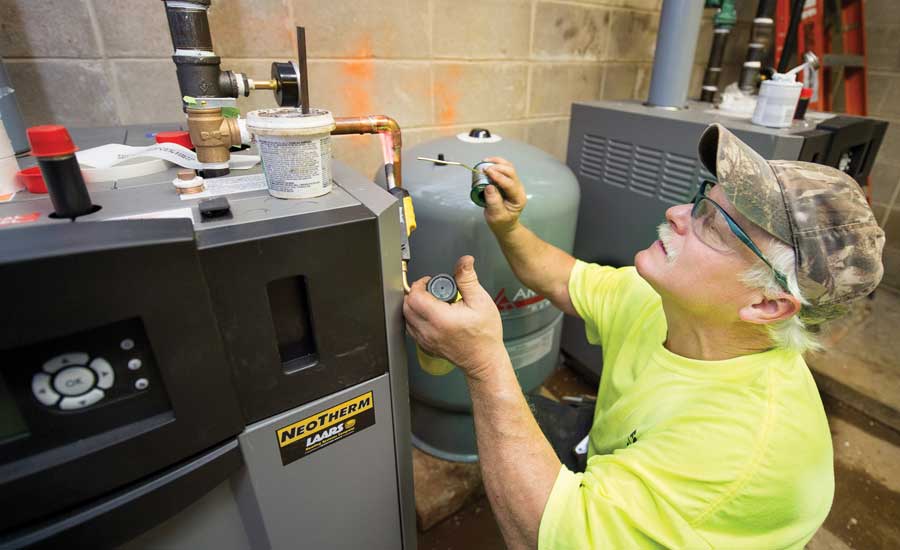 “What makes this job unique is that the campus is recognized by the historical society,” he continued. “The preservation committee sees to it that as [much] as possible of the buildings’ original façade and authentic characteristics remain unaltered.”

It was relatively simple to tie the new equipment in with the existing pipe, according to Dvorak.

“The existing cast-iron radiators were still in great working order,” he said.

“There are flow controls on everything, and the systems’ pumps have built-in pressure differentials,” said Kelly Michel, owner at St. Paul, Minnesota-based Michel Sales — the local rep firm for Laars and Bradford White. “The NeoTherm control panels make it easy to run the pumps.”

Taco 0011 pumps were installed with the boilers. Designed for high-efficiency jobs like Camp Pillsbury, the 0011’s are also maintenance-free, which was a key selling point.

The NeoTherms currently serve solely as the source of heat, with the potential to be a domestic hot water source down the road. 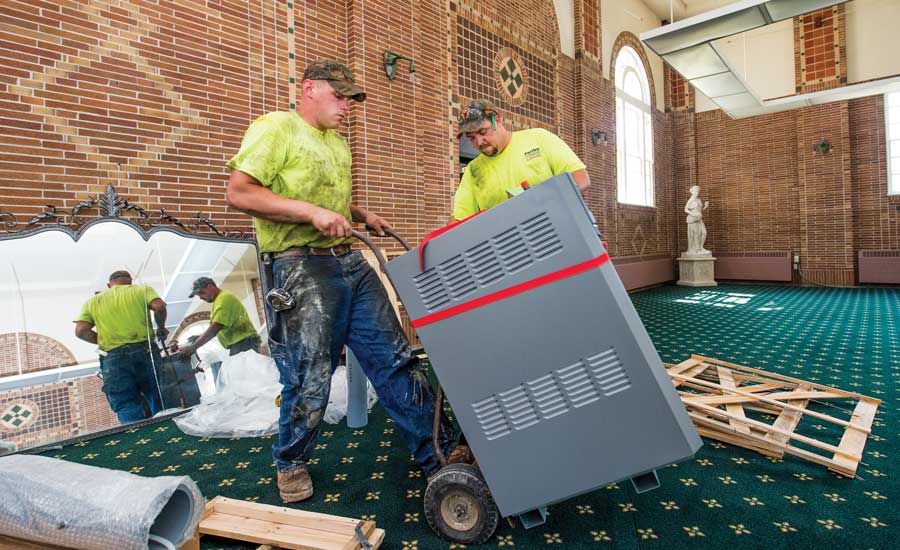 DELIVERY: Frank Livingston (left) and Jake Livingston (right), both Faribo employees, bring in a Laars NeoTherm for installation in the camp’s library building. 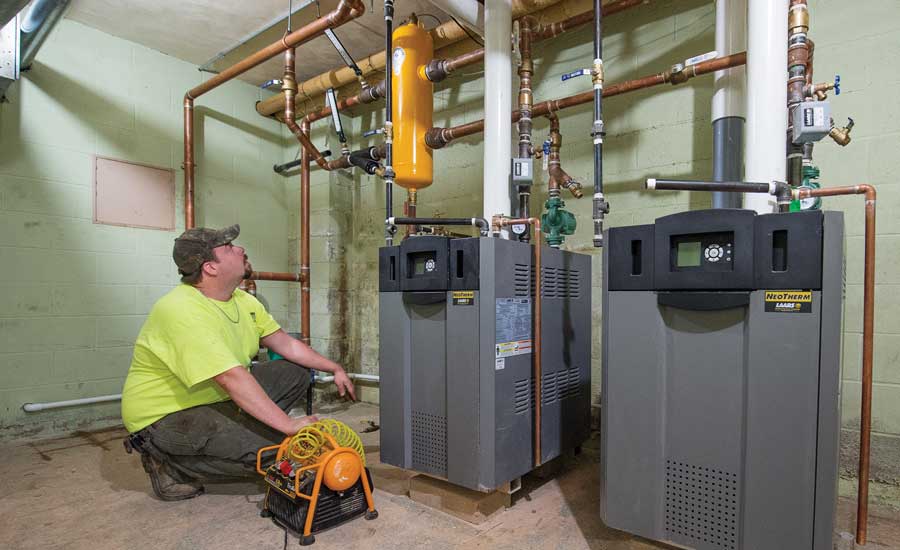 “We really enjoyed this project,” said Schwartz. “When you take the oldest college in the state of Minnesota that was shut down for several years and add somebody willing and able to revive it — it makes for a really cool project.”