It’s important to have company goals — celebrate every win, learn from every loss

What’s the difference between HVAC field techs and NFL players? Or how about the difference between owners/managers and NFL coaches? Well, the answer, according to Ryan Harris, who played for the Denver Broncos when they won Super Bowl 50, is nothing, really. In both situations, success is achieved through teamwork. Harris was the keynote speaker at the 2018 ACCA Leadership Conference that took place in Fort Worth, Texas.

“When you don’t recognize you’re on a team, you fail to recognize all the work the people around you are doing,” he said.

And though the end goal may be different for football coaches and HVAC contractors, the way to get there is the same: choosing a positive mindset. 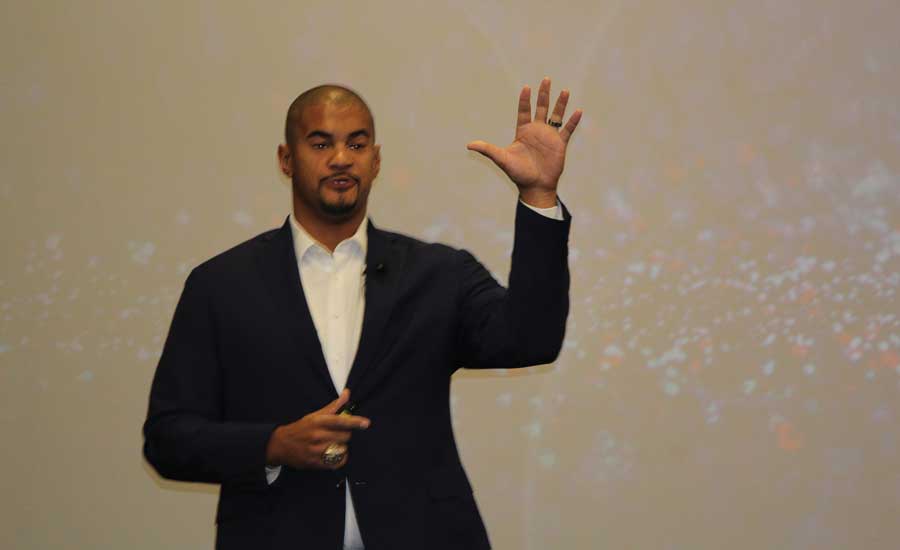 SAY IT, BELIEVE IT: Ryan Harris, 10-year NFL veteran and Super Bowl 50 champion, had attendees stand up with him to say the words “I am, I can, I will.”

“When you choose your mindset, you become your best self,” Harris said. “You become the best leader you can be. And the teams you’re on go from good to great. Your mindset is the only difference between your success and your failure.”

Harris shared several personal stories from his time in the NFL — not all of them were good.

“I chose my mindset, and so can you,” Harris added.

Everyone in attendance stood on their feet to practice reciting the words “I am, I can, I will” with conviction.

“When you speak the words ‘I am,’ you immediately get to take stock of who you are, where you’re at, what you’re feeling,” Harris said. “I am happy. I am angry. I am the king of mac ’n cheese. I am good enough.

“Immediately after you do that, two things happen,” he continued. “One, you start to build resolve because we’re faced with situations every day that we can’t control, that we didn’t know were going to happen. We also get to be honest with ourselves. A champion also takes ownership of the negative … ‘I am not listening. I am not working hard enough.’”

When someone speaks the words “I can,” it allows them to highlight the opportunities in front of them instead of the past behind them.

“The words ‘I can’ saved my career,” Harris said.

But being honest and having a willingness only goes so far.

“You must actually do the work,” Harris said. “You must pick up a shovel and dig. When you speak the words ‘I will,’ you put a person, a place, a thing, a time, an atmosphere around your success.”

After introducing attendees to the power of mindset, Harris brought up a concept that pretty much everyone is familiar with: leading by example.

“It’s old ... stale,” Harris said. “When we lead by example, we fail to give context to those we lead. We miss an opportunity to make those we lead better.”

Since people tend to think leaders have everything figured out — that they never made mistakes — it’s more effective to lead with an example that’s relatable.

Harris told a story about a rookie teammate he had who kept making mistakes. Other players, even the coaches, would yell at him. So one day, Harris told him about how his career started. How no matter what, he always seemed to make mistakes … until he started taking notes. He told him that every practice, he would write everything down. Then, he would go home and review it. He told him that he went from making three to four mistakes a game to three to four mistakes a year.

“And I left it at that,” Harris said. “The very next day, he had a notebook and three pens on his desk. See, when you lead with an example, the example you give will be the example you see.”

Speaking of fantastic careers, during the conference, Eric Bridgeman of Classic Air’s One Hour Heating & Air Conditioning in Virginia Beach, Virginia, was named ACCA’s 2018 Service Manager of the Year. 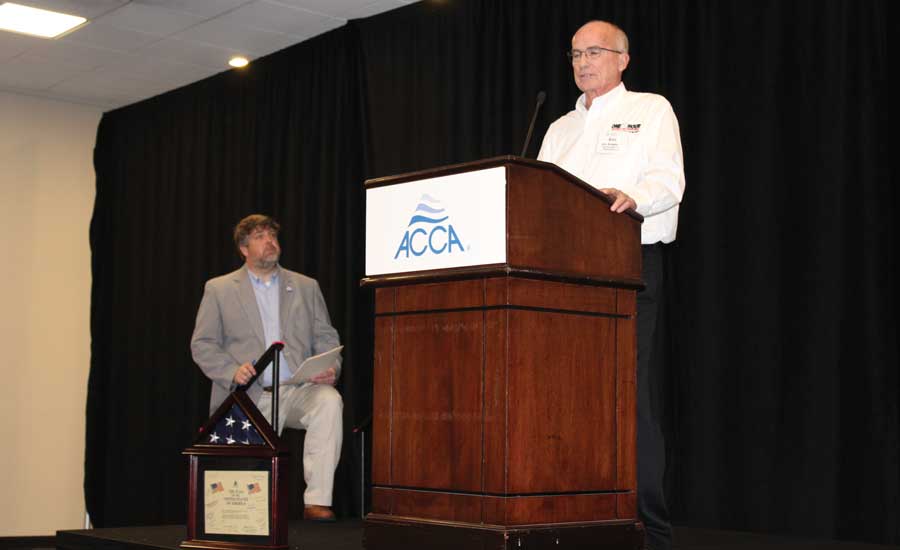 “It is an honor,” said Bridgeman, who’s worked in the industry for 40 years. “This honor would not be possible without the entire Classic Air family supporting me as I work to ensure we deliver superior customer service and support to our community and the industry.”

Barton James, interim president and CEO of ACCA, presented him with ACCA’s American flag that was flown over the U.S. Capitol Building on June 22 — National HVAC Technician Day. The flag was flown by Rep. Markwayne Mullin, R-Okla, president of Mullin Plumbing, Heating and Air.

In a session titled Consumer Trends and Evolving Customer Expectations for HVAC Companies, Edward McFarlane, vice president of learning and development at Haller Enterprises Inc., which has five locations throughout Pennsylvania, discussed the need to adapt to these new expectations in order to stay successful.

“If you want the fruit, you have to take care of the tree,” he said.

As other industries increase consumer expectations, it creates a blanket effect that covers all industries. For example, two-day shipping has become the standard, and now, even that seems long. People want instant gratification, and they will keep looking until they find it.

“The marketplace decides how you do business,” McFarlane said.

And according to him, contractors suffer a 40 percent decrease in their odds of qualifying in just five minutes. That means that no matter what day or time, when customers make contact — via phone, email, text, web chat, or social media — they expect to hear back in less than five minutes, or they move on to find a company that will reply. So even though the HVAC industry tends to be slow to adopt new technology, the consumers won’t accept that excuse anymore.

“To be successful, you have to try new things,” Harris said. “We have to be uncomfortable.”

Other topics covered during the conference related to data and data management, safe driving reinforcement, company culture, the fundamentals of successful service managers, branding, keeping good customers and replacing the bad ones, warranties, and training.