Across the nation, manufacturers and contractors are teaming up to solve tough comfort problems in the hospitality, hospital, and institutional market sectors. Here are three of the many examples of how different problems were resolved with unique solutions.

At a 359-bed health care facility in Kentucky, engineers were struggling to keep the hospital’s cafeteria cool amid the bluegrass state’s humid climate. Condensate in the air-handling unit (AHU) serving the food service area was leaving a residue on the coil that reduced airflow through the unit from the 14,000 cfm design parameter to around 10,000 cfm — nearly 30 percent less than what was originally specified. Of course, that meant the unit couldn’t provide enough cooling volume. Hospital maintenance staff turned to Charles Haskins with Thermal Equipment Sales in Louisville, Kentucky, who recommended the RLM Xtreme™ system from UV Resources. 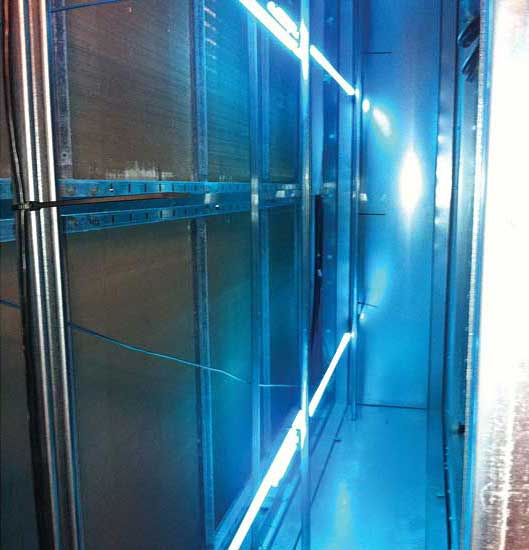 The high-output fixtureless configuration that was installed in the hospital cafeteria’s AHU consisted of four T5 (5/8-inch diameter), 61-inch-long UV-C lamps installed downstream, on the air-exiting side of the coil, where they are most productive killing mold and bacteria and degrading all other organic materials. For the Kentucky medical center, the UV-C installation represented about 10 percent of the cost of a new replacement coil.

Outside temperatures were about 90°F before the UV-C lamps were installed, according to Haskins.

“The AHU was unable to meet the food center’s thermostat set points,” he said. “The fan was running as fast as it could, but the unit couldn’t get temperatures below 84° in the kitchen or 78° in the café.”

Once the UV-C fixtures were installed, the baseline-measured airflow of 10,300 cfm had risen 35 percent to 14,192 cfm, which enabled the AHU to maintain the desired set-point temperature. The initial measured pressure drop across the coil of 2.66 inches of water column (w.g.) decreased to .69 inches w.g, which meant that the fan amperage was lower while achieving and maintaining desired temperature.

“After a mere 90 days, airflow is back to design specs, and we are able to maintain the desired temperature set points in the kitchen and cafeteria,” said Haskins. “The AHU motor is drawing less amps, saving the hospital energy. Based on this successful demonstration, we’ve decided to incorporate these performance-enhancing UV-C fixtures in more of the hospital’s AHUs.”

Other area hospitals are also now showing interest in the technology as well.

Nestled in the hills of Orange, Virginia, The Inn at Willow Grove — a historic plantation turned boutique resort and spa — attracts guests with its world-class hospitality.

In 2017, Travel + Leisure magazine named The Inn at Willow Grove the Best Hotel in the South, the Third Best Hotel in the Country, and the Ninth Best Hotel in the World. With accolades like these, owners David and Charlene Scibal decided to build two Creekside Cottages as an expansion, with five guest suites each. 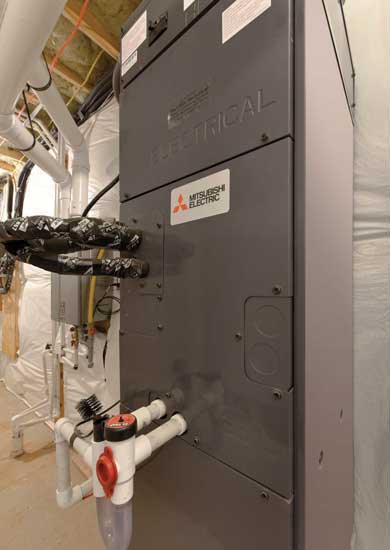 OUT OF SIGHT: At The Inn at Willow Grove, the contractor connected three of the upstairs units to one outdoor unit. Then, for the bottom floors, he used the new Mitsubishi Electric MVZ vertical ducted air handler shown here.

During the original 18-month remodel, the couple used Mitsubishi Electric products in the restaurant and mini splits for two of the rooms in the restaurant area. When they decided to do the cottage expansion in 2017, the Scibals and Duct-Rite Mechanical LLC, Madison, Virginia, drew on this experience during HVAC selection.

“It’s a boutique hotel and historic place ... the Scibals wanted a heating and cooling system where you could not see the equipment,” noted Joe Smith, installing mechanical contractor, Duct-Rite. “They also wanted to have the ability for individual temperature control in each room.”

“For the upper floor of each building, there was an attic above where we could locate the equipment and ductwork,” explained Smith. “We connected three of the upstairs units to one outdoor unit. Then, for the bottom floors, we used the new Mitsubishi Electric MVZ vertical ducted air handler and connected those to another outdoor unit. This gives [management] the ability to control the temperature in each room independently, and it also allows them to heat the lower level while air conditioning the upper floor if they want.”

“We’ve got the thermostats set up so that guests can control the temperature between certain ranges,” said Smith. “We gave the staff at The Inn at Willow Grove a Mitsubishi Electric portable controller, and it is connected to each of the 10 indoor thermostats. It allows them to monitor and change any of the settings in any of the rooms from a remote location.”

“We’re adding 350,000 square feet to our facility and introducing almost 2,000 tons of additional cooling capacity over the next few years,” said Keith Liken, engineering maintenance manager at Mount Sinai. “We really needed a commercial HVAC system with a longer life span that will provide significant improvements in energy and cost savings and fewer maintenance needs.”

In addition to reducing the impact of power outages, the hospital is overhauling its central chiller plant’s external structure to reinforce outer building walls, windows, and doors with materials that deflect strong winds and protect the building.

“Before deciding on the Magnitude chillers, we conducted an extensive life cycle-cost comparison against other equipment providers,” said Liken. “As part of this analysis, we calculated efficiencies of the system on part loads, and found we will save hundreds of thousands of dollars per year compared to the chillers we replaced.”

“The Daikin equipment made it easy to convert the plant from a primary-secondary to a variable-primary configuration,” said Sam Frasier, vice president at Moses and Associates Engineers Inc.

Daikin’s RideThrough technology enables chillers to maintain stable operation during momentary power loss lasting up to five seconds, ensuring no loss of cooling capacity. If an outage lasts longer than five seconds, RapidRestore can restart chillers in as little as 43 seconds once power is restored, reaching 80 percent load cooling capacity in less than 75 seconds.